Theaters and cinemas followed strict rules under the pandemic, but are being forced to close yet again under Germany's partial lockdown. Shocked and angry, artists have demanded immediate aid. 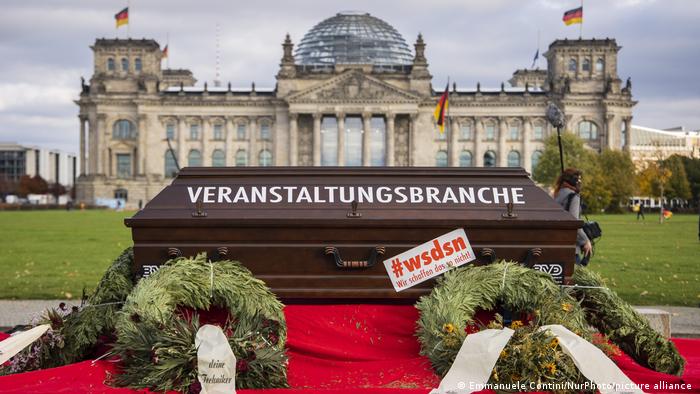 Red sweaters, red coats, red flags to highlight an industry on "red alert": many of the demonstrators from Germany's culture sector who marched through the center of Berlin on Wednesday have been out of work since March. The German concert and event industry has just about come to a standstill.

"If we are made to fall into a coma, you have to give us oxygen — anything else would be unprofessional," said Dirk Wöhler, co-founder of the "Red Alert" alliance. The movement has been backed by top German musicians including Herbert Grönemeyer and Campino. "We want solutions," Wöhler demanded.

The roughly 5,000 protesters had been hopeful for a solution but did not envision a new lockdown, which is exactly what the German government announced later that day: in November public life will come to a standstill again, initially for just four weeks. The lockdown is partial, only restaurants, bars, hotels, sports and culture events are affected.

"These pastmonths, you made us feel that we were worth less than cars, airplanes and soccer players. In the current pandemic, however, we are one of the sectors of the economy that are already in a much worse financial position than others," German musicians and comedians said in an open letter. The signatories pointed out existential hardships, adding that "some entrepreneurs and self-employed people have committed suicide out of sheer desperation. It is, they wrote, time for the government to act.

"I've never done anything like this before," said Till Brönner, an internationally successful jazz musician and photographer. "It must be because I'm pretty pissed off," he said in a six-minute video, viewed two million times on social media (as of October 29, 2020). "We all want to protect ourselves from this damn virus, but if an entire profession is forced by law to suspend its work for the protection of the general public, then the general public must ensure that people are still there after the coronavirus pandemic," the musician said. "This is not a luxury problem," he said, adding the government can't just throw billions at corporations while pointing artists to social welfare applications.

More than 1.5 million people work in the culture sector, Brönner said, adding that the ones hurting are not the top artists as much as the many event technicians, stage builders, tour photographers and ticket sellers. Another campaign, "Kulturgesicht" (culture face), uses black-and-white portrait photos to display the people who have been fearing for their existence for eight months. Under the hashtag #ohneunswirdsstill (It's going to be quiet without us) many artists are currently taking a stand on social media, posting the wording on their profile pictures. 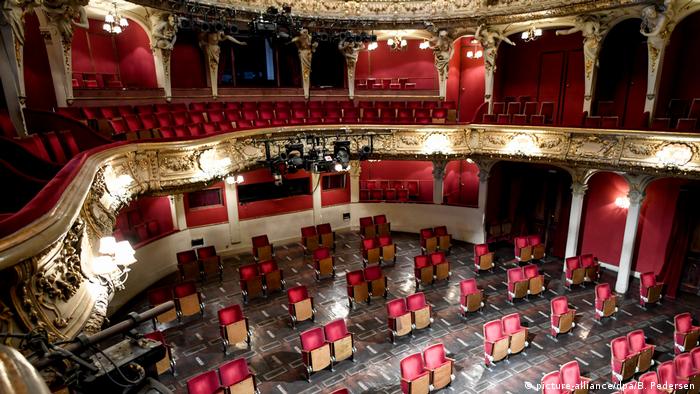 Concert halls, cinemas and theaters in particular conscientiously implemented the strict hygiene measures at high additional cost, they argued. There are few areas of society where distancing rules are implemented so precisely and consistently even if that means filling far fewer seats — while at the same time, airlines are allowed to fill ever last seat.

"I had hoped that over the past months, politicians had understood where people get infected," Christoph Terhechte, director of the DOK Leipzig film festival, told the German Press Agency. "Movie theaters are not sources of infection under the current hygiene rules." People sit far apart, they don't talk or interact in any other way, he argued. Pointing out cinemas as dangerous places is nonsense, he said.

"The renewed four-week partial lockdown will cost more theaters their livelihoods," said Christine Berg, chairwoman of the Central Association of Movie Theaters. The industry is looking at losses of about €1 billion ($850,000 million) this year, she said, which is "unbearable." There has not been a single known case of Covid-19 in any cinema anywhere, she said. "We are stunned."

Existential fears on the rise

It seems likely the government was already considering a partial lockdown in case of rising infection numbers, which makes it all the more harsh that immediate financial aid doesn't appear to be a given. It is "a matter of life or death for the industry," said federal commissioner for culture and the media Monika Grütters. The artists have behaved incredibly fairly throughout the crisis even though it hit them hard, she told Bild daily.

Economy Minister Peter Altmeier said the government will look into the situation of self-employed artists over the coming weeks. Berlin has already promised restaurants 70% of the sales revenue from November 2019 to compensate for the lockdown. Artists, musicians and other self-employed people in the culture sector face a complete loss of earnings in November as plays and concerts have to be cancelled again despite the venues' compliance with the current security requirements that involve a great deal of artistic, logistical and financial effort.

Unsubsidized private theaters and many artists have been fighting for their livelihood since March. Initial emergency aid of up to €9,000 ended up only covering operating costs — jazz musicians, light designers and photographers usually have none. The authorities offered facilitated access to financial benefits, but that wasn't the solution, either.

"I have used up my savings, which were actually intended for retirement," said a musician who does not want to be named. "A friend of mine who works in the automotive industry has been receiving several thousand euros in short-time work compensation per month since March," he said. "That does not seem fair."

Dirk Wöhler had a successful event agency in 2019 that is now in debt. "We feel like beggars, which we are not at all. I like to stay at home, but my shoulders are too small, I cannot carry this burden alone," he said.

Supermarkets have raised flags about a spike in demand for goods like toilet paper, which saw severe shortages during lockdown. Germany's agriculture minister said hoarding was "illogical" and "lacked solidarity."