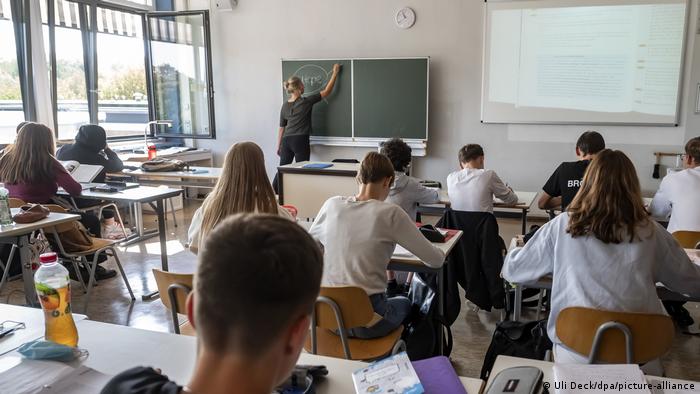 The German Environment Agency (UBA) on Thursday unveiled a four-page instruction manual for ventilation in schools, stating exactly when, why and how to air out classrooms "protect oneself from infectious particles."

"This means that the air is completely swapped for fresh air from outside three times an hour."

The practice of opening windows for fresh air for several minutes, known as Lüftung in German, is something of a national obsession in the country.

It has been added to the German government's formula for tackling the coronavirus and has become commonplace in schools during the pandemic, helping them remain open for students.

Are German schools prepared for a winter lockdown?

With the arrival of colder weather in Germany this week, parents and teachers have been debating whether to recommend that pupils wear hats and scarves inside classrooms. The UBA-devised guidelines are set to be a definitive authority on the ventilation issue.

Opening windows wide for a period of three to five minutes before closing them again "makes the temperature in the room drop by only a few degrees," the UBA said.

"After closing the windows, it quickly rises again," the UBA explained.

Further guidelines from the UBA state that windows should also remain wide open during break times, and that teachers should refrain from opening doors to avoid the spread of infectious particles through corridors into other parts of the school.

For classrooms in which windows cannot be opened for security reasons, the UBA recommends installing ventilation units.

A new school year begins as coronavirus cases continue to increase in Germany. Rules vary from region to region, and the equipment is often inadequate. Can schools handle the challenge of educating during the pandemic?

A mobile school in Afghanistan's Laghman province has been working to ensure that nomad boys and girls also receive an education. But, now, it is not the nomadic way of life that is cutting short the education of ambitious young girls there.