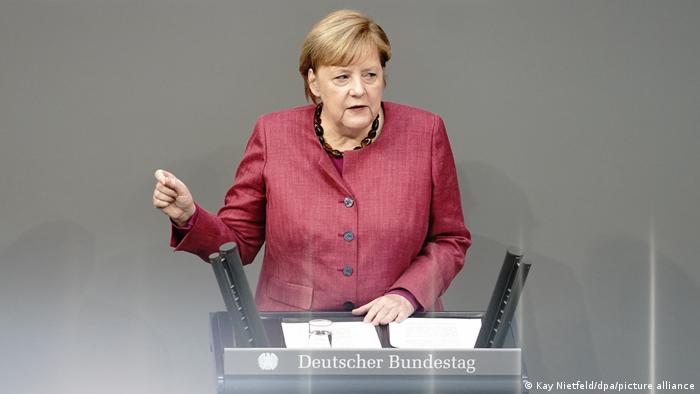 German Chancellor Angela Merkel defended the government's decision to impose a limited lockdown in a tense speech to lawmakers in the Bundestag on Thursday.

Her speech in the lower house of parliament comes as Germany logged a new record in daily coronavirus cases with over 16,700 cases within 24 hours. An estimated 75% of cases cannot be traced anymore, making it difficult to contain the spread.

During crisis talks on Wednesday, Merkel and Germany's 16 state leaders agreed to issue a month-long partial lockdown to curb the spread of the virus.

In a speech that was regularly interrupted by shouts from several German lawmakers, Merkel said the current rate of infection poses a massive threat to the country's health system.

"Such a dynamic would overwhelm our intensive care units within a few weeks," she said. Acting only after hospital beds are full "would be too late."

"The winter will be difficult. Four long difficult months, but it will end," she said.

Merkel said she understood "frustration" over the pandemic and the new restrictions, but she urged lawmakers and the public to do their part to slow the spread.

"Freedom isn't being able to do whatever you want," she said. "Freedom is taking responsibility."

The chancellor also took aim at conspiracy theories and disinformation in the fight against the virus in a likely jab at the far-right Alternative for Germany (AfD).

"Lies, disinformation and conspiracy theories not only damage democratic debate, but also the fight against the virus," Merkel said.

A belief in facts not only upholds society and democracy, "human lives depend on it.''

What are Germany's new lockdown measures?

The partial lockdown, which goes into effect on Monday, calls for stricter social distancing measures and limits on the number of people who can meet in public.

Cultural and sports facilities will close, while soccer fans will be barred from top-tier Bundesliga games in stadiums.

Outdoor gatherings will be curbed to members from no more than two households with a maximum of 10 people.

The lockdown measures are currently slated to run until the end of November.

What do the health workers think?

Germany's doctors and other medical workers in intensive care wards were happy about the latest decision, according to Uwe Janssens, the president of the German Association for Critical Care and Emergency Medicine.

The current outbreak "seems controllable" but the pressure on intensive care medicine grows as more and more older people get sick, he added.

Janssens also noted it was important to stop medical workers from getting infected, even when they are not working.

"We know that we now see that many of the staff get infected in private settings," he said. "So we miss some of them and they can't go back to work. This is a critical situation."

What are the government's arguments?

Speaking to DW, Economy Minister Peter Altmaier said that the new lockdown was "the least damaging way we can proceed." He added that government would provide financial support for the affected companies.

"I understand the disappointment of many of the businesses concerned, but all the experts have strongly advised us to reduce the intensity and the frequency of social contact," he said.

Altmaier also warned that a further jump in infections would bring "an enormous risk" of a new recession.

"Given the fact that the government has decided not to close down schools and kindergartens, we had to make a choice and we tried to do it in the most responsible way," he told DW.

Why are lawmakers pushing back?

German lawmakers on both the federal and state levels have grown increasingly frustrated in recent weeks over not being involved in the crisis talks.

"This debate should happen before the measures are decided, not afterwards," Lindner said during the debate in the Bundestag on Thursday.

"We have to strike a balance, even at the cost of people dying," the far-right politician said.

The decisions concerning new measures to curb the spread of the virus — as well as when to lift restrictions — have largely been in the hands of federal and state leaders since the start of the pandemic. Opposition lawmakers argue that the measures should be debated and approved by lawmakers.

DW political correspondent Hans Brandt noted that with the coronavirus restrictions being challenged in court, the government will need the help of the Bundestag and state parliaments.

"If laws need to be changed so measures can be defended in court, then parliaments need to change those laws," Brandt said.