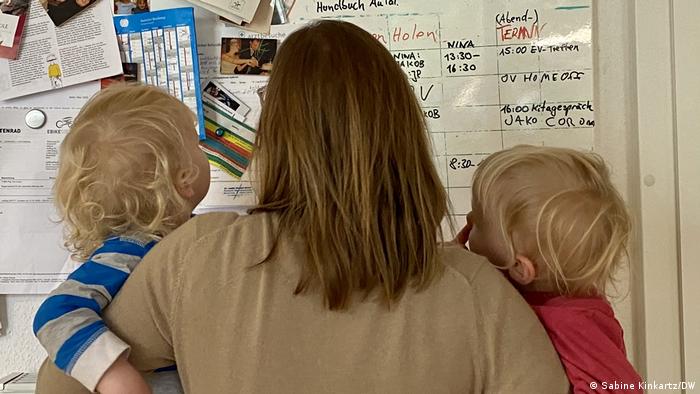 Two-and-a-half-year-old Jakob has just poured himself a glass of water and is admiring his work. Suddenly, he tries to pour the water back into the bottle. Before his father Oliver can jump up from the kitchen table to stop his son's experiment, the water is already cascading over the countertop of the kitchen island where the small blond boy is standing on a stool. Jakob doesn't see the problem. "I am cleaning!" he cries cheerfully as he tries to staunch the flood with a red-and-white checked tea towel.

"Don't worry. It's just water," Caroline reassuringly tells her husband. He sits back down again in his chair with a sigh, but then jumps up again a minute later. Jakob's twin brother Jaron has discovered an empty beer bottle in a shelf in the spacious kitchen and is waving it around. "Things have already got a bit easier with the twins," says Caroline laughing. Now and again they play with one another peacefully. "But unfortunately they don't take a midday nap anymore even though they wake up at 5 a.m."

Caroline and Oliver look exhausted. Both of them have demanding jobs. They are expected to attend events in the evening and to travel. "A lot of things were canceled in March and April," Caroline explains, "but since May I've been cranking it out." Nevertheless, it was possible to combine work and family life up to September — until Diana had to leave.

The young Colombian spent a year working as an au pair for the Berlin family. She looked after the twins and their five-and-a-half-year-old sister Clara. She helped with the laundry and with the tidying up. She was always flexible and was available when the children got sick and could not go to kindergarten. 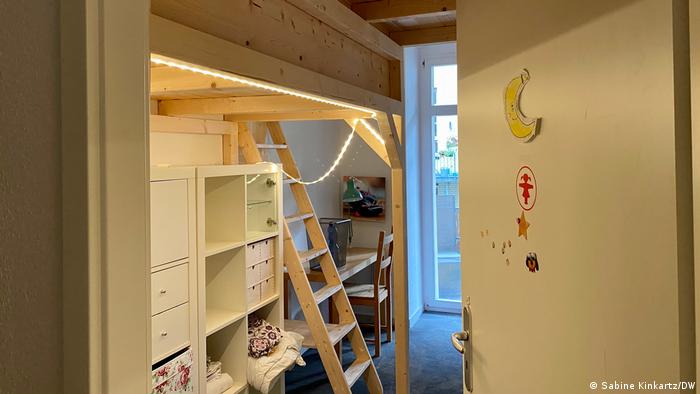 The term au pair is French and roughly translates as equal to. It denotes a reciprocal arrangement between two equals. In this case it meant thirty hours of childcare and light household duties in return for a room of your own and board, as well as an allowance of €280 ($330) per month, time off for a holiday, and a language course.

Young people find the offer attractive because it is a good way to get to know the language and the culture of the country. For their host families it is often the only way they can afford to pursue careers while raising a family. Demand for the arrangement is growing on both sides. In 2019 more than 15,000 au pairs came to Germany, more than 9,000 of them from non-EU countries. Colombia and Georgia were top on the list, followed by Ukraine, Russia, Madagascar, Zimbabwe, Brazil and Vietnam.

Oliver and Caroline wistfully say that both they and their children miss Diana a lot, in part because of the enriching cultural insights that she provided. "She cooked Colombian specialties for us, taught Clara how to count in Spanish in a playful manner and often discussed politics with my husband," as Caroline recalls. "Rather than traveling to Colombia we had a piece of the country at home with us." Diana obviously left a lasting impression. And the friendship between families and their au pairs often last a lifetime.

After Diana left, the family was expecting 23-year-old Seheno from Madagascar to move in. But she was unable to get a visa or to enter Germany because of the coronavirus pandemic. Oliver cannot understand it. He says that this was not a holiday, but a long-term stay which could be organized "very, very safely and without endangering others." If necessary, Oliver says that they would pay for the tests and for a period of quarantine in a hotel.

"We remain in contact with Seheno and chat with her regularly," says Caroline. "Like us, she is very unhappy about the situation, but she refuses to give up hope. She is doing a German course ... and is looking after her four-year-old brother." But the family does not want to give up. "We have given her a firm commitment."

Help from the EU?

Some other families are not so patient. Caroline says she has heard stories of au pairs from non-EU countries coming into Germany via France. Au pairs whose visas are running out but are still in Germany are also highly coveted, she says. There are some financially attractive offers online to entice au pairs to change family and accommodation. Illegally, if necessary.

Monika Supernok, vice-president of the au pair association Gütegemeinschaft Au pair, which ensures transparency and quality control for au pair schemes in Germany, is familiar with such stories. She has been campaigning for an easing of entry regulations to allow au pairs to come to Germany for months. She has written to politicians and even launched an online petition that was submitted to the German Bundestag, calling for a special regulation to allow au pairs to enter the country.

Though the opposition backed the petition, it was rejected by Germany's ruling parties, Angela Merkel's Christian Democratic Union (CDU) and the Social Democrats (SPD). But Supernok refuses to give up, and she is hoping for help from an EU directive regulating the conditions of entry and residence of third-country nationals for education and training — and which originally included au pairing.

Supernok is outraged that the German government did not include au pairs among the people doing voluntary service when it implemented the directive, arguing that France and Belgium followed the directive as it was intended. She thinks it is unfair that students have been allowed to come to Germany despite the pandemic but au pairs have not.

As the number of coronavirus infections continues to rise, she is under no illusions that Germany will change its entry regulations in the near future. "It is such a shame because young people will not be able to repeat this year abroad another time. It's something they do after school but not when they are already studying or training."

Caroline and Oliver also doubt that Seheno will be allowed to travel from Madagascar in the next few weeks. Right now, they are making do with an expensive babysitter, while their daughter Clara also spends time with her grandparents in Lower Saxony. "I hope that we'll muddle through till spring," says Caroline. For now, though, her main hope is that a vaccine will be developed and the whole COVID-19 situation will improve.

India: Being blind during the coronavirus pandemic

As the world's second most populated country emerges from lockdown, millions of Indians who suffer from blindness attempt to navigate a new world. Reliant on touch, they are thwarted by physical distancing rules.