German families should celebrate twice and with fewer people, says Germany's commissioner for nursing care. He has called on the federal and state governments to avoid a hard lockdown of nursing homes again. 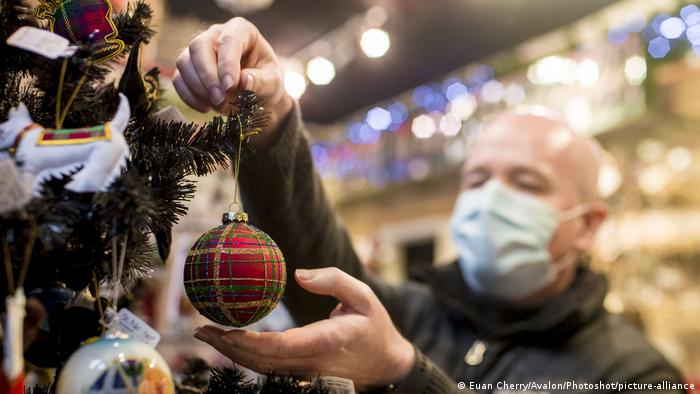 Germany's Commissioner for Nursing Care Andreas Westerfellhaus has advised families to celebrate Christmas "in shifts" this year to minimize the risk of infection, in a newspaper interview published on Tuesday.

Westerfellhaus told mass-market tabloid Bild that people should celebrate with fewer people and to celebrate twice.

"You can also give presents on December 28 or even later," he said.

Presents are normally gifted on December 24 in Germany. Families typically enjoy a modest meal on the 24th, while the 25th is often reserved for a family feast.

Christmas is normally a time of family gatherings in Germany, while many city centers are transformed into traditional Christmas markets. However, Christmas markets are likely to be canceled this year, if they haven't been canceled already.

Westerfellhaus is responsible for representing the political interests of those in need of care and ensuring that their concerns are at the heart of the care and health system.

In comments to Bild, he said he could not say whether visits to all nursing homes at Christmas were possible. "Not all relatives can come to the homes on Christmas Eve. He therefore strongly recommended "staggered" visits.

He said that previous lockdown efforts, which largely sealed off nursing homes, had led to terrible conditions for residents.

"People have sometimes died alone without seeing their loved ones again. Such a thing must not be repeated.”

"These are shocking fates. I think it's good that Health Minister Jens Spahn and Chancellor Angela Merkel have said there must not be a complete blockade of the nursing homes again."

Westerfellhaus said that it was important to defend against the coronavirus while maintaining the quality of life of people. Especially for people with dementia, "personal contact cannot be replaced by anything else," he said.

On Wednesday, the federal and state governments will meet again to discuss further measures to combat a recent spike in infections.

Media reports leading up the meeting suggest that the federal government wants to keep schools and daycare centers open, except in regions with catastrophically high infection rates, but will take a tougher approach to restaurants and events.