Coronavirus: Nurses in Germany remain understaffed and underpaid | Germany | News and in-depth reporting from Berlin and beyond | DW | 16.07.2020 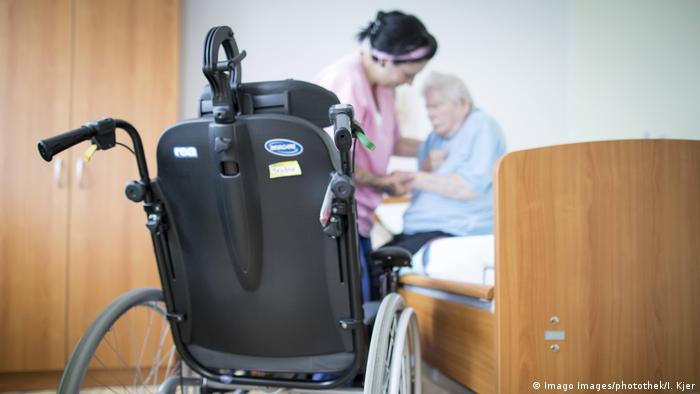 In March it became clear in Germany that the coronavirus pandemic would pose a serious problem to society. It led to increased attention for one of the sectors with crucial work in store: carers, whether fully trained nurses or their assistants, in hospitals and care homes.

Germany was one of several countries where many went outside in the evenings to applaud people for their selfless and courageous work. Meanwhile, those affected and within the industry humbly submitted that an improved salary or a less congested shift rota would do rather more good.

There's been something approaching consensus in German for years thatthe sector is underpaid, especially given how demanding and important the work is. But has that led to action?

German Health Minister Jens Spahn's proposed temporary solution was to throw a bandage on the twin tumors of poor pay and staff shortages. He suggested a one-off bonus payment of €1,500 ($1,700, or between two and three weeks' wages for a full time nurse), but even that plan is wobbling months later.

The government will cover €1,000 of the sum, as decided in the federal Bundestag parliament. State governments and the carers' employers were supposed to cobble together the remaining €500 per carer, but they are bickering over precisely who ought to pay. Should it be employers who cough up, or the statutory health insurance funds that largely underpin Germany's health system?

Meanwhile, four months on, frontline staff continue to wait for the promised relief.

Experts have dismissed the bonus as a drop in the bucket anyway. German social lobby group the VdK said that a one-off payment would change nothing about Germany's "systematic discrimination of social careers." With 2 million members, it's the largest group of its kind in the country. VdK President Verena Bentele told the Neue Osnabrücker Zeitung that improved working conditions were the real order of the day, at all levels. She was pointing both to base salaries and to more humane working hours.

According to a Nuremberg institute monitoring Germany's labor market, a fully-trained German nurse averages a monthly income before tax of €2,400. That's around €1,000 per month shy of the national GDP per capita. Nurses in Saxony-Anhalt have it particularly tough, at more like €2,100 per month, while carers in the wealthy southwestern state of Baden Württemberg top the charts at roughly €3,000 per month.

Health Minister Spahn has said that full time carers should not earn less than €2,500, which would equate to an hourly salary of around €14 in full time work. That might not sound like a particularly ambitious goal, yet it immediately prompted resistance from employers.

A national group of private care providers, the bpa, said that Spahn had thrown "a totally arbitrary number into play, which is neither defined nor economically supported." The body's president, Rainer Brüderle, is a former economy minister who once represented the pro-business Free Democrats.

"Instead of populistically spinning yarns around numbers, the health minister should focus on his true task and finally present suggestions for how higher wages could be funded," Brüderle said.

Footing the bills in old people's homes, in particular, is becoming a challenge. Very often, people's statutory insurance does not cover all the costs. An aging population also means that demand for care is steadily rising.

A recent survey by the Sinus Institute think tank found that around one in five young people said they could in theory envision working in the care sector. However, only 4% were "very interested" in the idea. This comes as no shock to professor Stefan Sell at the University of Koblenz, an expert on social and labor market issues.

"Quite obviously young people have a decent nose for the real situation when it comes to pay. In large parts of the care sector, above all when it comes to caring for the elderly, it can only be described as unsatisfactory, especially considering the demands of the job and the necessary qualifications," Sell wrote this week.

Around a year before the coronavirus outbreak, Germany's government decided that it wanted to find an additional 13,000 carers for the elderly. According to recent research by public broadcaster ARD, it has filled just 2,600 to date.

It's not just Germany struggling to fill nursing positions, seemingly at least in part because of the poor pay and conditions in the sector.

In France, on Bastille Day this week,in place of a major military parade, President Emmanuel Macron pulled carers, shop clerks and police officers into the spotlight. Yet even as he sought to outline plans for a nursing pay bump, banners waved saying that the president was letting hospitals choke despite the plaudits. Doctors and nurses had complained of lacking protective equipment and about cost-cutting amid the pandemic.

France's reshuffled government is now promising an additional €6 billion for the sector in order to improve nurses' pay. However, experts have already voiced doubts on whether that sum will truly cover the extra €200 a month Macron intends to pay carers in France.

Blane Bachelor had just moved to Berlin when COVID-19 spread to Europe and the lockdown began. She and her family were stuck in their new home without a network of friends or knowledge of German. But they could clap. (06.06.2020)