German retirement homes isolate the elderly from COVID-19 threat | Germany | News and in-depth reporting from Berlin and beyond | DW | 09.04.2020

The coronavirus is increasingly prevalent in German nursing homes. In order to prevent infections, many want to separate seniors from the outside world — but this comes at a cost to the elderly and their families. 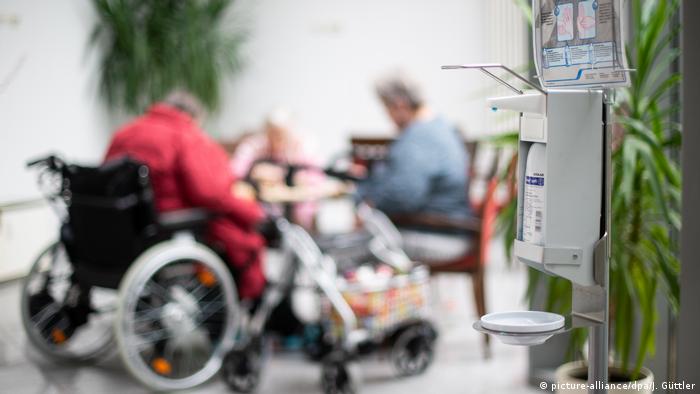 "The next time I move it will be into a box with six nails," Grandma Lotte used to joke sometimes. Known for her kind stubbornness, she didn't want to move out of her house in Remseck, in the southern German state of Baden-Württemberg. But in mid-February, the 95-year-old suddenly lacked the strength to get out of bed. Family care was not enough anymore and Grandma Lotte had to move to a nursing home.

Her granddaughter Sandra Kaisser drove to visit her every week. "As long as she had guests, she was relatively well," says the 35-year-old. But it didn't last long. Three weeks into her stay, all visits to the nursing home were banned as a protective measure against the spread of coronavirus.

"After this, her condition deteriorated dramatically. She became increasingly depressed and couldn't take it anymore," says Kaisser. With Lotte's hearing and speech deteriorating, telephone wasn't an option. Old-fashioned postcards were the last way to stay connected.

The call from the nursing home came in late March: Grandma would soon die, said the nurse at the other end of the line. Though visiting the dying is allowed as an exception, the family had to wait for two days until the death was deemed "irrevocable."

These last visits were also limited: one person per day could go in for just one hour. "Nobody wants to tell a dying person "I have to go soon," says Kaisser with shaky voice.

When her grandfather was dying ten years ago, many family members spent his last hours together, comforting him and each other. On April 2, Kaisser was alone with her grandmother, gently touching and speaking to her; the elderly woman seemed to become calmer. But the granddaughter had to leave at 5:00 PM. Three hours later, Grandma Lotte passed away. 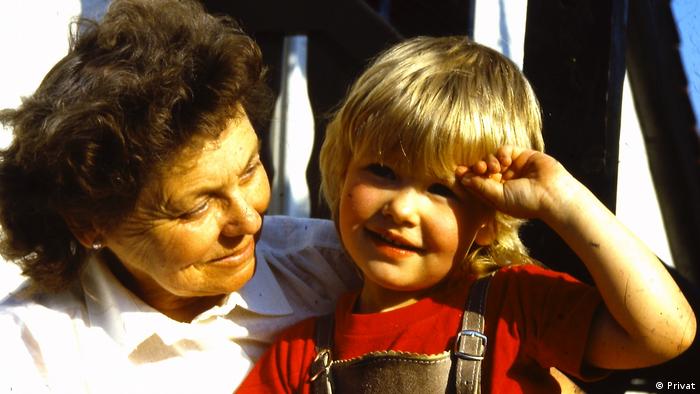 Oma Lotte and her granddaughter Sandra 33 years ago

Danger for the elderly

Although care homes are usually used to dealing with illnesses and deaths, the coronavirus has shaken up numerous facilities in Germany — whose average population is the second-oldest in the European Union, after Italy.

Visits and events in nursing homes are canceled in an effort to isolate and protect the over 800,000 seniors who live in around 11,700 facilities across the country.

The Hans-Lilje-Haus in Wolfsburg has become a tragic symbol of this danger. So far about half of its 165 residents have become infected, and 33 have died. Facilities in numerous regions are affected, but their complete number is not known.

In other European countries coronavirus has taken a deathly toll in nursing homes. In Spain, 1,500 residents died by the end of March; In France, some 2,400 people had died in such facilities up to this week.

With the virus infiltrating more nursing homes, German authorities are now expecting the death rates to rise. So far they have been at relatively low levels in comparison to other European countries. As of Tuesday, the authorities counted 1607 COVID-related deaths, with the average age of the deceased being 80 years old.

Since Germany's 16 states are tasked with deciding lockdown measures, they vary from region to region. But consensus goes in the direction of full separation of nursing homes from the outside world.

In Berlin, receiving a single one-hour visit per day is still allowed by law. Nevertheless, most of the facilities lock their doors completely. These include Caritas, an organization affiliated with the Catholic Church. The group runs 72 nursing homes in Berlin and neighboring regions.

"We receive a lot of understanding for this decision, because the relatives are very worried about their loved ones," says Caritas spokesman Thomas Gleissner.

Families fear for standards of care

But not all relatives are happy with this solution. "Many relatives are afraid that the care will worsen now," says Markus Sutorius, legal adviser at BIVA-Pflegeschutzbund, an NGO fighting for the rights of people in elderly care. In the last three weeks, he has received many calls from worried families.

Even before the coronavirus crisis, many elderly care homes were understaffed due to limited funding. So the residents' relatives often help out with simple activities like washing, feeding, or shopping for their loved ones. Now this help will be missing.

Sutorius is critical of restrictions going beyond legal regulations, like at Caritas' facilities in Berlin, saying some of these restrictions are "frightening."

Moreover, exceptions allowing family members to visit their dying relatives are being interpreted differently throughout the country. Some facilities allow several relatives to spend more time with their loved ones. Others, like in the case of Sandra Kaisser and her Grandma Lotte, allow only limited, one-on-one visits. 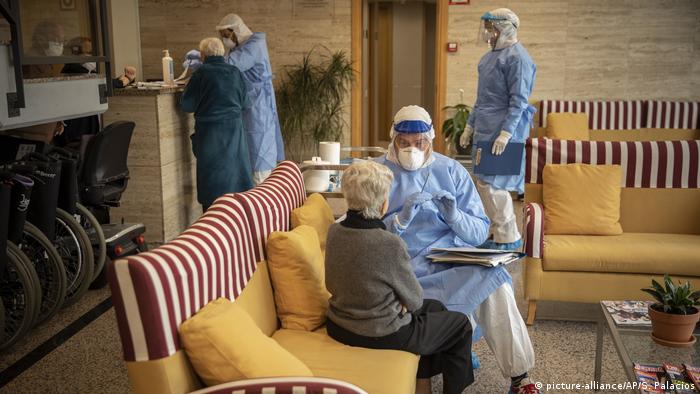 In Spain, doctors with the NGO 'Open Arms' test the elderly in a nursing home for coronavirus.

In order to minimize the risk, the states of Lower Saxony and Bavaria have introduced full admission freezes for care homes.

But even with strict barriers, infections cannot be completely ruled out, reports Robert Schneider, the manager of an AWO senior center in Langenzenn, in the area of Nuremberg. By Monday, 62 of the 113 residents and dozens of staff had been infected there, and eight seniors had died. "We don't know how the virus got inside," says Schneider. The situation reflects another reality that many care homes report — a lack of necessary protective equipment.

After the first confirmed case, the infections spread rapidly within a week due to a lack of support of medical authorities and lagging test results, Schneider claims. He now tries to separate the infected from the healthy roommates, but it is difficult, since "the whole house is designed to encourage social contacts" and there are a lot of common spaces.

Moreover, 80% of his residents suffer from dementia, so they do not understand that they need to stay in their rooms. The personnel try to lock them in the rooms, but the residents still get away. Tying them to the beds is not an option either, since it could deteriorate their health even more, says Schneider. 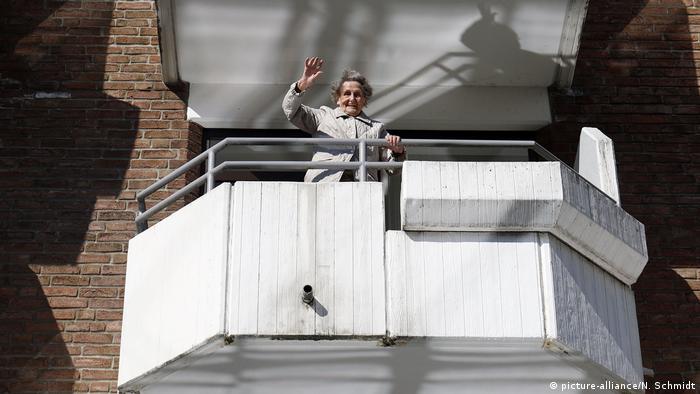 An elderly 96-year-old resident of a nursing home in Düsseldorf stands on the balcony of her room and communicates with her relatives at a distance because of the ban on visiting.

Experts say loneliness and isolation might pose a special threat to older people. And doctors fear that psychological counseling, scarce already before the crisis, will now be even less available, due to the concentration on infection protection and lack of staff.

"Isolation can worsen the course of chronic diseases and mental health," warns Johannes Pantel, professor for geriatric medicine at the University of Frankfurt. Any protective measures against coronavirus must always be measured against the negative side effects, he warns. Isolated people "die earlier than they would otherwise, given their life expectancy."

Alone with the grief

Grandma Lotte was already very weak when she arrived at the nursing home. But had she not been isolated, the last weeks of her life could have been better, says her granddaughter Sandra Kaisser. She is grateful to the nurses who took care of her grandmother to the very end, but at the same time sad and frustrated that she could do nothing to help make Lotte's final hours better.

Now she is left alone with her grief. In Baden-Württemberg, only the closest family members are allowed to attend a small burial ceremony now. In any case, Kaisser's family members, scattered around Germany and abroad, would also have difficulties attending due to lockdowns and travel restrictions. So they decided to postpone the memorial service to a future date when the coronavirus crisis has dwindled.

"It is horribly painful not to be able to connect now," says Sandra Kaisser. "To be with others, talk to them, to go through the grieving process together."