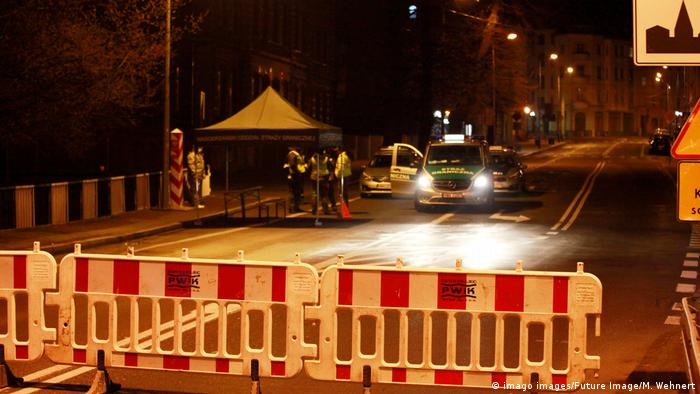 The waiting time at the Jedrzychowice border crossing near the eastern German town of Görlitz is 18 hours. In Olzyna, near Cottbus, and Swiecko, near Frankfurt (Oder), it takes 12 hours to cross, according to a spokesperson for the Polish border police.

Heiko Teggatz, of Germany's Police Trade Union, said instructions to border officials to protect against the coronavirus were being "strictly followed." He said rumors on social media of a total closure of Germany's border with Poland border were false. People who can demonstrate good reasons for needing to cross, such as social care work, remain permitted to do so.

Recruited by German agencies, carers often work on an alternating rotation basis for six weeks to three months so that they have time off to recuperate after tending to elderly and sick people. Aides from Poland tend to return to the country for visits on their breaks. The problem now is that, when they return to Poland, they're required to go into quarantine for a fortnight. And not only them — the people who drive them are, too. As a result, they are increasingly refusing to drive care workers back to Poland, making things even more difficult for the carers, who are also now often forbidden to travel on buses, aboard which they would be in a dense crowd of people.

Some recruitment agencies now permit care workers from Poland to cross the border on foot. Minibuses or private cars wait on the German side to collect the staff and drive them to their destinations. But this is a huge organizational burden, and it's unclear how long it can continue. "We're talking to the relatives of the people in need of care," said Franziska Underberg, a spokesperson for Pflegehelden, an agency headquartered in northern Germany that specializes in matching families with care workers from Poland.

Read more: Spain to go into partial lockdown over coronavirus

Underberg said Pflegehelden had an official "A1 certificate," which facilitates business travel between Germany and other countries in the EU and European Economic Area. The agency employs about 2,500 care workers at 60 locations across Germany. The care workers don't often have specialist nursing training, and so cannot be categorized as nursing staff. Instead, they help out around the house, providing general assistance and taking care of their "patients."

Care workers often live around the clock in the homes of the people they look after. For this, they're paid almost twice what they would receive for the same work in Poland. Meanwhile, the service costs clients half as much as a bed in a German nursing home, which can cost up to €4,000 ($4,350) per month — putting it out of most people's budgets. Many people would also rather receive care at home. Now, however, this model is in danger of collapse.

"Things are looking really dire," said Frederic Seebohm, of the VHBP, Germany's association for home care and nursing. People are increasingly unable to work or are turning down jobs in Germany because of the restrictions in place to prevent the spread of coronavirus. "We have a care problem that's causing us major headaches right now," Seebohm said. He anticipates that beginning in April fewer caregivers will come to work in Germany, leaving their positions unfilled. This could affect 100,000-200,000 households with elderly people. Many of the care workers still willing to come from Poland don't speak German, leaving recruiters to look to Romania or even outside the European Union — to Ukraine, for example.