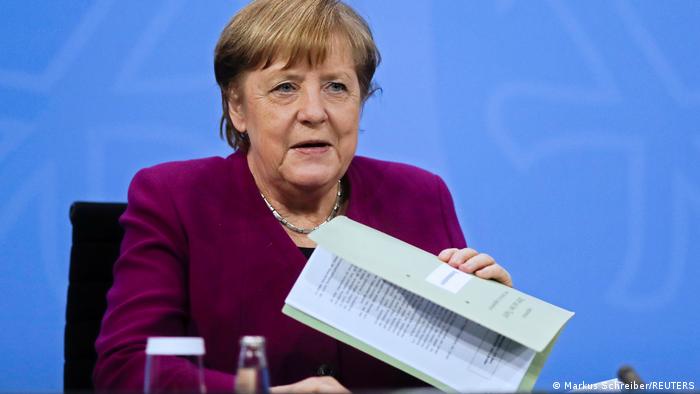 Merkel made the announcement following a meeting with the 16 state premiers on Wednesday that lasted more than nine hours.

The federal government announced that the lockdown has been extended until at least March 28.

Step one: Some school classes (albeit at states' individual discretion), daycare, and hairdressers reopen. This step already took place on Monday, March 1.

Step two, starting March 8: Bookstores and florists can reopen with the condition of one customer per 10 square meters. Contact-based professions, such as massage practices, are also allowed to reopen with a negative test result.

Step three, starting March 8 at the earliest: If recorded cases are less than 50 per 100,000 people, public spaces such asmuseums, zoos and gardens will be allowed to reopen, as well as retail businesses with at least 10 square meters (108 square feet) of space per customer.

Up to 10 people can play non-contact outdoor sports.

If the incidence rate is between 50 to 100, access to spaces such as museums and retail businesses would be on a pre-booking basis requiring at least 40 square meters per customer in shops.

A maximum of five people from no more than two households could then also play non-contact outdoor sports.

Step four, starting March 22 at the earliest: If the rate remains under 50, outdoor dining, theaters, concert venues, cinemas and opera houses can reopen.

If the infection rate is between 50 to 100, outdoor dining would only be allowed on a pre-booking basis.

Step five, starting April 5 at the earliest: If the infection rate remains under 50, up to 50 people will be allowed to gather for outdoor recreational events, and sports restrictions would be lifted.

If the infection rate is between 50 to 100, shops could reopen with at least 10 square meters per customer.

Outdoor non-contact sports and indoor contact-based exercises would be allowed.

Health Minister Jens Spahn said Germany would speed up the vaccination process in the next few days after the Standing Committee on Vaccination recommends the AstraZeneca jab for people aged 65 and over.

Merkel said rapid testing showed "good accuracy as to whether someone is infectious on a daily basis." The rapid tests are set to be accessible and free of charge starting March 8.

The federal government said that starting March 8, people from two households will be allowed to gather in groups of up to five people; children under the age of 14 are not included in that count and can take the true figure beyond five.

If the regional incidence remains below 35, up to 10 people from three households could then gather.

However, the government still encouraged people to maintain a "social bubble" and limit interactions as much as possible.

News of the plans evoked mixed reactions from German politicians and health experts. Susanne Ferschl of The Left party called the plans "arbitrary and not a strategy."

Christine Aschenberg-Dugnus of the business-friendly Free Democratic Party (FDP), long a critic of Germany's vaccination approach, called the slow pace of vaccinations in the country a "disgrace."

Social Democratic (SPD) politician and health expert Karl Lauterbach voiced skepticism about the plan in an interview with DW on Thursday, saying: "We will have increasing case numbers because we are in a third wave and the decisions from yesterday will not help to curtail the third wave. And at the same time, we will not be able to help the economy because we cannot open restaurants or bars or anything, because when there is an increase in caseload, such openings will not happen."

Although Lauterbach welcomed news of nationwide access to antigen tests, he warned there would still be a long stretch of time between now and the point when a majority of Germans can be vaccinated: "We should make it very clear that a third wave is not a minor problem, that it is not a small wave before everyone gets the vaccination," he said.

Gernot Marx, president of the German Interdisciplinary Association of Intensive Care and Emergency Medicine, warned that loosening lockdown rules would only lead to a spike in infections, saying: "I reckon that with the new opening scenarios we will see a significant increase in new infections. And also more intensive care patients with COVID-19."

Germany moved ahead with the first reopening steps this week. On Monday, hairdressers opened after two-and-a-half months. The same day, some German states also allowed businesses such as florists and hardware stores to open.

German Social Democrats MP and physician Karl Lauterbach says loss of quality of life is the high price the elderly pay for pandemic control. He said the pandemic has highlighted the impact of loneliness on health.