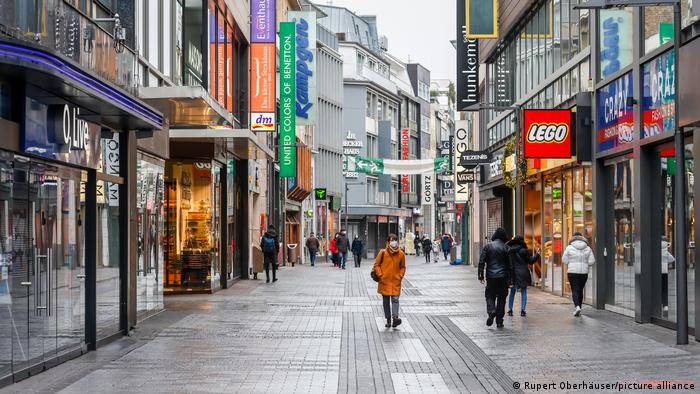 Under the new rules, most shops would be allowed to open if infection rates were low enough

Germany's national government and states are set to extend the COVID-19 lockdown by three weeks, to March 28, according to a draft document seen by DW.

Chancellor Angela Merkel and the heads of Germany's states will hold discussions the measures on Wednesday.

What changes are on the table?

Merkel and the state premiers are working on a draft agreement to allow shops to reopen in areas where the number of coronavirus infections is considered reasonably low.

Coronavirus cases would have to fall to a seven-day average of 35 per 100,000 people.

Some outlets, such as florists, book and gardening shops would be able to reopen even if rates are higher.

According to the draft text, up to five adults from two households would be allowed to gather from March 8, with up to 10 adults allowed in areas with low infection rates. Under current rules, each household can only socialize with one other person.

The German government is also expected to appeal to citizens to avoid domestic and foreign travel over the Easter period.

Hairdressers in Germany reopened for business on Monday, along with hardware stores and flower shops in certain states.

The draft document cited the vaccine drive and arrival of mass rapid antigen tests as justification for the easing of some measures. It said Germany would provide at least one free test a week to pupils and teachers in schools. Companies may also be required to offer the tests to staff, according to the proposal.

Elementary school pupils returned to their classrooms across much of Germany last week, after a decision last month to extend most, but not all, lockdown measures until March 7.

Most shops have stayed closed since tighter restrictions were introduced on December 16.

Restaurants, bars, sports and leisure venues have all been closed since November 2.

Hotels in Germany are currently closed to all but business travelers.

However, experts last week warned that the declining infection rate had stabilized and even started climbing slightly, with growing concerns about the spread of new virus variants.

The number of coronavirus cases in Germany went up by 3,943 to 2,451,011, according to figures released early on Monday by the country's Robert Koch Institute for infectious diseases. COVID-linked fatalities went up by 358, to 70,463 in total.

Germany's President Frank-Walter Steinmeier will award COVID vaccine developers Özlem Türeci and Ugur Sahin with the Order of Merit for contributing to the "containment of the coronavirus pandemic."