Many say the reopening of schools was a hasty move

One-way arrows on the floors of the corridors, calls over the intercom to maintain distance, smaller class groups: That's the new normal in the corona pandemic for students of the Friedrich-Ebert-Gymnasium in the western German city of Bonn. Those back at school belong to the classes doing state exams this year. They've been back at school for real since Monday, preparing for their graduation or intermediate exams.

"We have made quite a few preparations," school principal Frank Langner told DW. Each year has been split up into two groups called cohorts, each with 70 to 75 students. The individual courses have also been spread over two classrooms. There are never more than 15 students in one room. "That way, we can ensure that any infections that happen are limited to one cohort. So we have adapted in-school lessons." Langer said that thanks to the smaller class sizes, distancing and masks, the risk of infection during class was quite low anyway.

COVID-19: Should kids return to school despite the risk?

Schools throughout Germany are welcoming students back to in-person classes with measures like these since Monday. To start with, only primary schools and classes due to take state exams are reopening. In North Rhine-Westphalia, Germany's most populous state, that means about a third of all 2.5 million school students are returning.

But there are differences from federal state to federal state. Education is a matter for the states, not the federal government. That leads to a range of different responses to the coronavirus crisis.

In Saarland, for example, classes due to sit exams are all returning together, while other states, such as Baden-Württemberg, are rotating them in smaller groups. It's a similar story with other measures. Some states insist that masks are worn in class, others don't. Some states are planning regular testing for teachers and students, others aren't.

"We must distinguish between what makes sense locally and what needs to be applied statewide," says school principal Langner. In Bonn, some classes are attending school on alternating days. Others, such as his own, are dividing classes up and assigning them different rooms. That means even siblings can experience different approaches to dealing with the Corona crisis. "There should be a certain amount of uniformity," is Langner's recommendation. 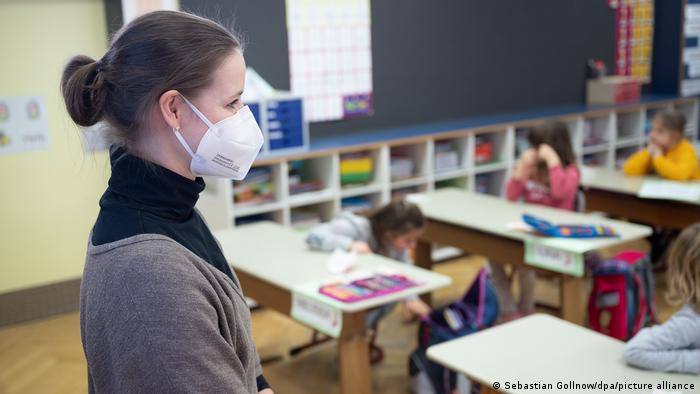 While schools take different approaches to the reopening, there are also differences over whether it should be happening at all. Infection numbers are still not stable and the British variant is spreading in some parts of Germany. Many people fear that Germany is on the threshold of a third wave of infections.National politicians such as German education minister Anja Karliczek are in favor of reopening. "Children, especially the smaller ones, need each other", said Karliczek.

One big area of concern is the safety of teachers. In some regions, such as the state of Thuringia, schools are reopening despite a seven-day incidence of 100 new infections per 100,000 members of the population. That means the risk of infection hangs over every hour at the school.

This is why the states and the federal government have agreed to move primary school teachers and nursery school and primary school employees into a higher priority group for vaccinations. States have pledged to offer vaccinations to them as soon as enough doses become available.

Putting the cart before the horse

Calls for teachers and other school workers to be given a higher priority for vaccination have been growing louder for weeks. Until now, they could not expect to be inoculated before early summer – and the school year would practically be over by then. According to the latest plan, teachers should be vaccinated in springtime. The social affairs minister of Lower Saxony, Carola Reimann, said her state had been "calling for this measure for some time" at meetings with the federal government. 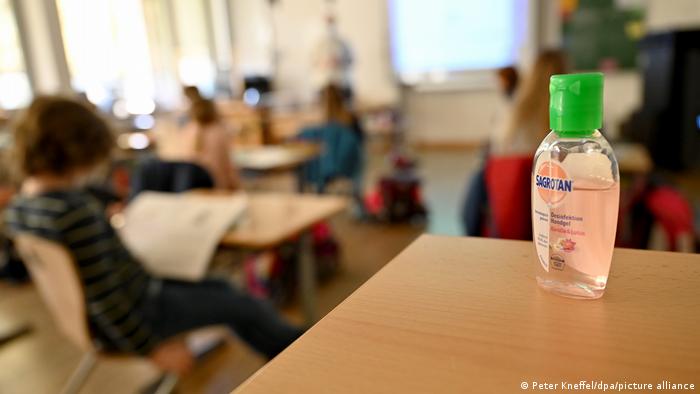 Students are taught to wear masks, keep a distance and use disinfectant for their hands

The German Teachers' Association has been pushing for it too, "We would have liked it to have been done before the schools reopened. This is a classic case of putting the cart before the horse," said association president Heinz-Peter Meidinger in an interview with DW.

The German Teachers' Association is also critical of the decision to prioritize primary school teachers, saying high-school students spread the virus in ways similar to adults, and therefore teachers giving classes in secondary schools are also exposed to a higher risk.

The chairman of the Deutsche Stiftung Patientenschutz (German Foundation for Protection of Patients), Eugen Brysch, is critical of the move to change vaccination priorities. He said the plan had already taken infection risks into account.

"If certain professions get moved up, it will cost lives," said Brysch before the decision.

Meidinger said teachers were not pushing their way past senior citizens in the pecking order for vaccinations. He said the Teachers' Association did not make its demands until it was clear that the AstraZeneca vaccine would not be administered to senior citizens.

Not all teachers want to be vaccinated

AstraZeneca is indeed a potential solution to the dilemma. Due to a lack of data so far, it is not being given to senior citizens. But it can have quite severe side-effects and is viewed with suspicion by some people. As a result, many people don't show up for their appointments to be given the AstraZeneca vaccine. "Some teachers are skeptical of vaccinations, too," said Meidinger. "But there is a large number of people in favor of vaccination."

Some federal states have already drawn up concrete plans to inoculate teachers. The social affairs minister of Baden-Württemberg, Manfred Lucha, has announced that teachers can arrange vaccination appointments from next week — thanks to a major shipment of the AstraZeneca vaccine.