COVID pandemic can make teens easy targets for radicalization | Germany | News and in-depth reporting from Berlin and beyond | DW | 06.02.2021 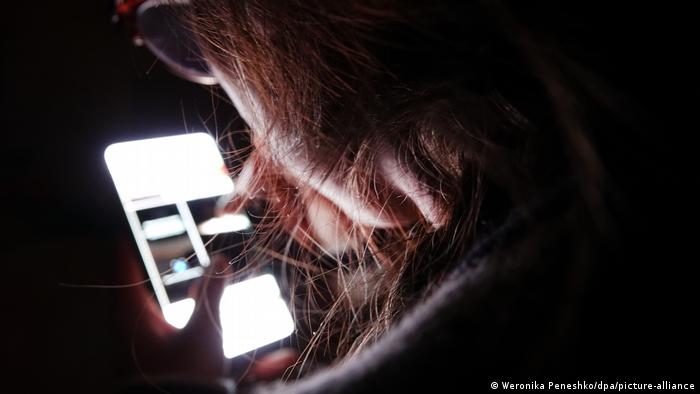 Lockdown is leaving teens more isolated than ever

This story of extremism starts, like many in Germany, with Hitler. Specifically, a Hitler meme. Someone had posted the meme — illegal under German law for its Nazi content— along with some other racist remarks, on a school's digital bulletin board.

Memes are just one social media tool in the toolbox media-savvy extremist groups use. With "lighter content" they're extending their digital reach from the dark corners of the web to popular channels like YouTube, Instagram and gaming platforms.

And their audience includes teenagers, says Lisa Kiefer, who heads a project called CleaRTeaching, which launched in 2016 to help stop teens in Germany from becoming radicalized. The Hitler-meme incident happened at one of the project's partner schools.

Posting an offensive, or in this case, potentially illegal meme, doesn't necessarily spell radicalization, Lisa Kiefer points out. It does, however, point to a disturbing trend among the underage population: They're now more likely to share extremist content, in many cases unknowingly.

It's not uncommon for students to share videos and other content that to them "seems completely harmless," says Kiefer."But it becomes a bigger problem when you know what's actually behind it. And there's a lot of that going around."

Radicalization in the age of COVID-19

With the COVID-19 pandemic forcing teens to stay home, it has become less likely teachers will catch wind of problematic content like the Hitler meme making its rounds among students at school. And without the teachers' support, some students may become even more vulnerable to extremist groups online.

Radicalization efforts have evolved rapidly in Germany in recent years thanks to the internet, with the greatest concerns surrounding not just right-wing extremism, but also Islamist groups.

And these efforts are becoming far more subtle.

Right-wing extremists, for example, have abandoned old-school recruitment efforts of handing out Nazi music CDs. In fact, the "New Right" isn't really recruiting in the classic sense of the word, according to right-wing extremism expert Andreas Speit, a prolific author and reporter for the left-leaning taz newspaper.

"They want to alter the way people think and act in the pre-political sphere in the hope of weakening status quo," says Speit. "And that's exactly their strategy on social media. They want to reach young adults with their right-wing resentment."

That means distributing games that promote ideas of protecting Europe, with protagonists who fit the bill for the "ethno-state." It also means adopting slick Instagram accountswith subtle clues to anti-Semitic and xenophobic beliefs.

Neosalafists, an Islamist group in Germany, have also been adopting a similarly subtle strategy. In YouTube videos and social media posts, for example, they manipulate the fight against racism and exclusion to shore up Muslim solidarity. They may look less extreme  in appearance and messaging, but experts warn that's not the case.

"I'll say it again and again: What's behind this is a brutal/hardcore ideology," says Bernd Ridwan-Bauknecht, a longtime teacher in Germany's public school system and himself a convert to Islam.

Since 2004, Bauknecht has taught Islamic religion classes, which are offered in some public schools, and has witnessed how propaganda finds its way to teens, whether from the Neosalafist scene in North Rhine-Westphalia, Germany's most populous state, or from Islamic State supporters farther afield in recent years.

As Bauknecht sees it, radicalization is a complex process with many factors to be considered. At the same time, he warns that more subtle social media efforts shouldn't be underestimated. "They're a means to an end," he says.

When it comes to helping students navigate those murky waters, though, things are not always as clear cut as with the Hitler meme, an obvious violation of German law.

CleaRTeaching, which recently launched a nationwide program to implement the findings of its pilot project, wants to introduce a holistic approach to combat radicalization. It incorporates awareness among students and teachers of their own beliefs and biases when dealing with ideological content. The emphasis is on context, dialogue and respect — and putting a system in place in schools that can prevent radicalized violence in the absolute worse-case scenario.

Right now, Kiefer is concerned about a noticeable upswing in "existential fears" among students at the vocational schools where CleaRTeaching operates.

Experiencing a crisis can be the catalyst for radicalization, along with a host of other issues, ranging from developmental issues during puberty, to family problems, to experiencing discrimination or exclusion.

The most at-risk students, says Kiefer, are the ones "who are looking for meaning and who are also angry about conditions in society. And right now, we're at a point in time where many people are angry about many things." 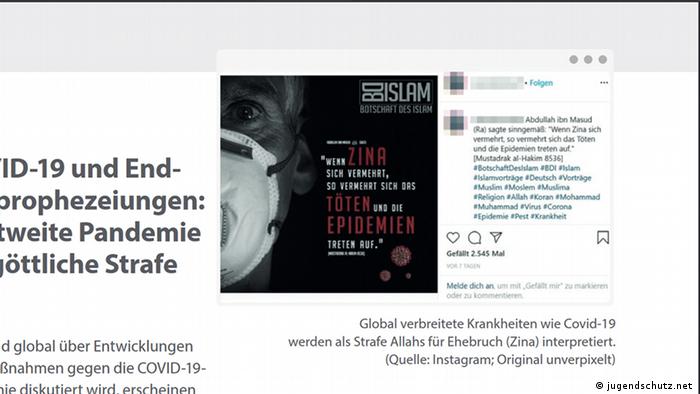 COVID-19 itself has become fodder for propaganda online. Islamist posts identified by Germany's internet watchdog for children's safety, jugendschutz.net, have equated the pandemic with punishment from God for sinful behavior and have prophesized the end of time.

Right-wing posts have also used the crisis to spread conspiracy theories that lockdown measures are the beginning of a dictatorship under Chancellor Angela Merkel. They've also laced pandemic conspiracy theories with anti-Semitic and xenophobic beliefs.

But just how much of this are teens seeing? That's a nearly impossible question to answer, according Julia Klatt, who works with Mobile Beratung gegen Rechtsextremismus NRW, a mobile counseling program tasked with dispelling right-wing extremism and promoting anti-discrimination efforts in North Rhine-Westphalia.

What Klatt can confirm is that prior to the pandemic, the majority of counseling requests were when students were exposed to "right-wing or racist memes, or generally, pictures or messages in a class WhatsApp group.”

And despite the constraints of the pandemic, these requests have not slowed down in a noticeable way.

The rise of alternative groups

One point looming large for programs like the mobile counseling and CleaRTeaching is the rise of conspiracy theories through alternative groups like Querdenker, QAnon and anti-vaxxers.

According to a study this month by the Commission to Protect Minors in the Media (KJM ), over one in three posts from alternative groups, including influencers, were found to be illegal or harmful to minors. Their sample examined 800 posts and videos and also found this to be true of over half the content sampled from Telegram and VK, nearly 40% from YouTube and just under 30% in the case of Twitter and Facebook.

There's also growing concern that engaging with "less harmful content" can eventually lead to more extreme views. A comprehensive 2019 study that surveyed over 330,000 videos across nearly 350 YouTube channels suggested that this happens in part through indoctrination and also through algorithms.

Both Kiefer from CleaRTeaching and Klatt from the mobile counseling group are seeing these tendencies on the rise — and it's not only students they're worried about.

"I've already been getting requests for help saying, for example, my mom, or my dad, or my uncle are involved [in one of those groups]. What should I do, what can I do to rescue them?," says Klatt.

Klatt and Kiefer both expect this to be a growing issue in the coming months, as these issues become more and more problematic in the broader society.