A Querdenker group, one German state said, has been "infiltrated by extremists." The movement is responsible for arranging large demonstrations against coronavirus restrictions across the country. 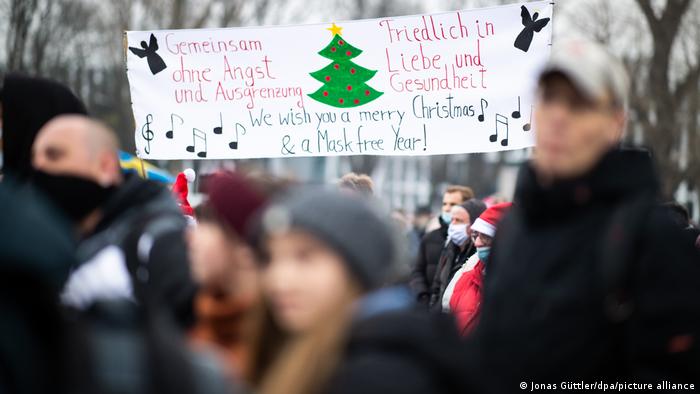 The State Office for the Protection of the Consitution in the German state of Baden-Württemberg on Wednesday declared that it will begin to surveil a Querdenker, or "lateral thinking," group opposed to coronavirus-related restrictions.

The state office responsible for domestic security, formally classified the group as an object of observation as the group has been "infiltrated by extremists." The announcement comes as federal and state interior ministers prepare to discuss conspiracy myths and ideologies at a conference on Thursday.

The "lateral thinking" movement has been responsible for organizing some of the largest demonstrations against coronavirus restrictions, including a protest in Leipzig last month, which saw over 20,000 attendees.

The founder of the group is Stuttgart-based entrepreneur Michael Ballweg. The full name of the movement put under surveillance – "Querdenker 711" – references Stuttgart's telephone area code.

Critics have said the group is primarily supported by right-wing extremists, Reichsbürger, or those who reject the idea of the modern German state, and conspiracy theorists –– a claim that Ballweg disputes.

"We are a peaceful movement and not a political party," he told the dpa news agency. Demonstrations held by the organization have descended into violence between protesters and police in recent months.

Police officers have used water cannons against demonstrators in cities across the country, while people set off a self-made explosive device in Berlin in October, allegedly in protest of the restrictions.

That same month, police investigated an attack on a building belonging to the Robert Koch Institute, Germany's disease prevention authority. In that case, a security guard reported witnessing several suspects throw incendiary devices at the building.

'A tendency toward radicalization'

At a meeting of federal and state ministers on Thursday, politicians are set to focus on groups such as the Querdenker movement. According to the draft resolution, ministers will look at "the attempted influence on the formation of opinion in society through disinformation of foreign powers and through conspiracy theories used by extremists," as such views "could develop into a tendency toward radicalization and new extremism."

The aim of the meeting is to figure out ways to combat the "negative effects and possible threats to the free democratic basic order – especially against the background of the current pandemic in connection with conspiracy theories."

Germany has recorded nearly 1.3 million cases and over 20,000 deaths since the start of the pandemic. The country is currently under a "light" lockdown, while leaders mull harsher restrictions to combat the virus.