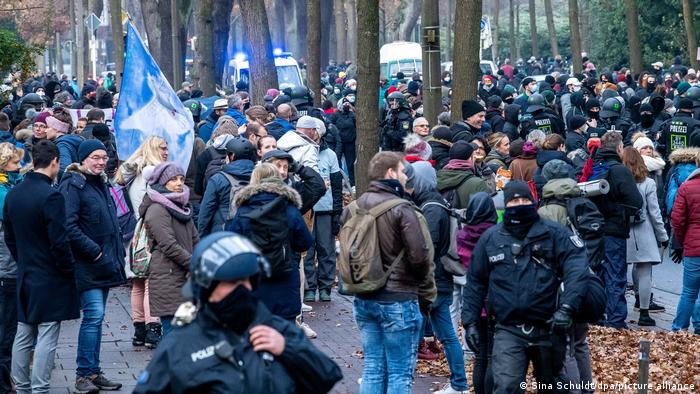 Opponents of the lockdown measures gathered in Bremen, as well as counterdemonstrators

Police in the northern German city of Bremen have intervened to shut down an anti-lockdown protest that went ahead despite a ban by Germany's highest court.

Hundreds of people still gathered near the city's main train station in the afternoon and evening. Opponents of the German government's virus restrictions as well as counterdemonstrators were present.

Police said two officers were injured, with authorities issuing dozens of citations and orders to disperse.

Earlier on Saturday Germany's Constitutional Court upheld a ban on the protest, which was organized by the Querdenker movement, or so-called "Lateral Thinker" movement.

Organizers had filed an emergency appeal with the court in Karlsruhe to hold a protest of up to 20,000 participants. 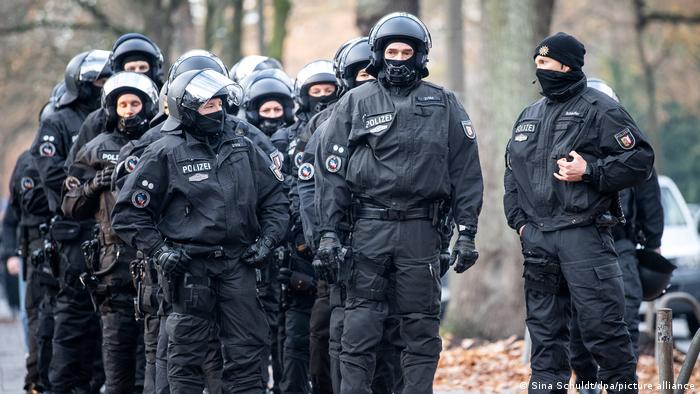 The Bremen city government rejected the gathering on the grounds that organizers and participants would not follow physical distancing rules or wear face masks, as they have failed to do at protests in other cities.

"When you consider how many people are limiting their social contacts out of solidarity and observing the rules of distance and hygiene, we can by no means tolerate that those who refuse to wear masks consciously endanger the health of others with their behavior," said Bremen Interior Minister Ulrich Mäurer.

Two courts, the Bremen Administrative Court and the Higher Administrative Court, had backed the ban prior to the decision by Germany's highest court because the demonstration could lead to "considerable risks of infection," at a time when Germany is struggling to reduce its number of cases nationwide.

Chancellor Angela Merkel announced last week that the current partial lockdown, in place since November 2, would be extended through January 2, as the country has not reached its goals of reducing coronavirus infection numbers. Fears remain that the health care system could be stretched to the breaking point.

A recent survey showed that 53% of Germans think the lockdown measures "are appropriate" while some 18% believe they do not go far enough.

Although the Querdenker movement represents a small share of German public opinion, they have staged numerous protests against lockdowns and other restrictive measures since the summer.

Organizers have gathered thousands of people in cities all across Germany, at times clashing with police when authorities sought to dissolve their demonstrations.