Anti-lockdown march in Frankfurt: Police use water cannon on counterprotesters | Germany | News and in-depth reporting from Berlin and beyond | DW | 14.11.2020 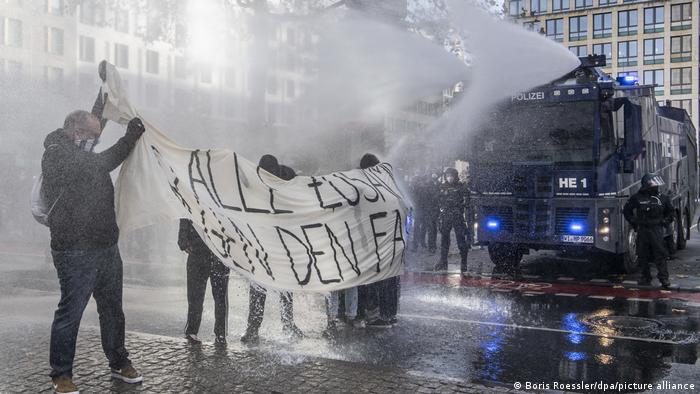 Frankfurt police deployed water cannons on counterprotesters who were trying to block a march against coronavirus restrictions on Saturday.

Around 600 supporters of the so-called Querdenker (lateral thinker) movement rallied through the German city on Saturday. But about 300 counterprotesters holding banners with Antifa symbols and reading "bring down the right" tried to block their path in the city center.

Police used water cannons to free up the route for the rally after officers were attacked. The security forces also used batons on the counterprotesters. 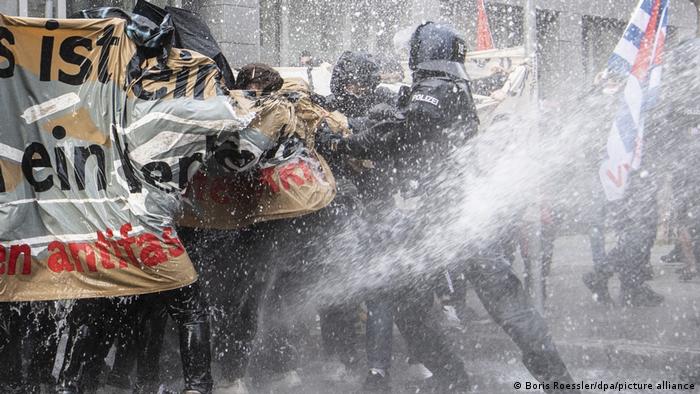 The main rally was later broken up because the Querdenker protesters were not adhering to rules on wearing masks and keeping a safe distance.

Germany has seen widespread demonstrations against government measures to combat the coronavirus outbreak. A violent protest in Leipzig has prompted calls for more assertive policing. Smaller marches also took place Saturday in the cities of Karlsruhe, Regensburg and Erfurt.

Berliners are debating the pros and cons of the latest anti-coronavirus measures. With much of the city labeled as "hot spots" due to alarming infection rates the government is clamping down.

People across Argentina have begun speaking of "quaranternity" while enduring the world's longest lockdown. Residents in Buenos Aires have been cooped up for five months now and their nerves are frazzled.