A protest by coronavirus skeptics in the eastern German city of Leipzig that turned violent has prompted calls for more assertive police action. But police say a light touch was appropriate. 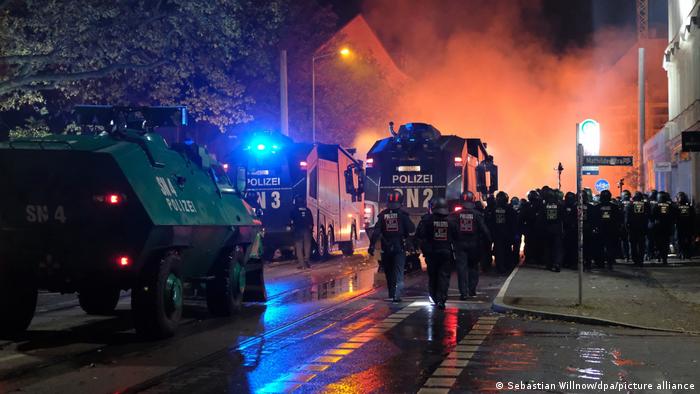 A leading German politician on Monday accused authorities of downplaying far-right violence after protesters clashed with police at a coronavirus skeptics' demonstration on Saturday.

The police concept for controlling the Leipzig demonstration was "irresponsible," said Saskia Esken, the leader of the junior coalition party, the Social Democrats (SPD).

"Police are able to strategically prevent such things if desired," she said, referring to attacks on police after the protest was broken up over hygiene concerns. Several media outlets reported that the violent protesters included members of far-right groups that have exploited recent protests against coronavirus restrictions to their own ends.

The Left Party also stepped up its calls for the resignation of Wöller, who has oversight over police in the state of Saxony, where Leipzig is situated. The Left's parliamentary leader, Rico Gebhardt, accused him of an "ongoing failure of leadership."

The Leipzig demonstration drew around 20,000 participants, some of whom threw projectiles and fireworks at police and remained on the streets well into the night. It came days after Germany went into a second, partial lockdown amid a major upsurge in coronavirus cases. 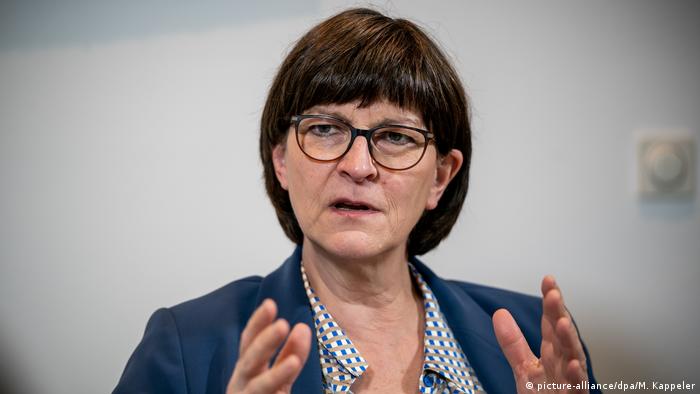 The secretary general of Chancellor Angela Merkel's Christian Democratic Union (CDU), Paul Ziemiak, however, said Esken's comments were "inappropriate" and accused her of "blurting out" criticisms of police. He said a "conclusive assessment" of the police action in Leipzig was not yet possible.

Police representatives have also defended the de-escalation strategies employed by security forces at the demonstration. "Using water cannon on people for refusing to wear masks is not proportionate," Jörg Radek, the head of the police union GdP told newspapers from the Funke Media Group.

The head of the second-largest police trade union, DPolG, also dismissed criticism of police. Rainer Wendt told public broadcaster SWR that the court ruling permitting the demonstration, on condition that the protesters uphold coronavirus health measures, had put police in "a completely impossible situation." Wendt said it should have been clear both that the crowd would not wish to keep to the rules, and that police would be unable to enforce them on such a scale.

"I would like the judges who reach decisions like these on Fridays to then stand in the front row of police lines at the weekend and experience what their ruling brought about," Wendt said.

At the same time, the German government expressed concern at the behavior of many protesters at Saturday's demonstration, which, like previous protests, drew not only people opposed to coronavirus restrictions but also members of the far-right scene and a range of conspiracy theorists.

Government spokesman Steffen Seibert called the violence at the demonstration a "disastrous signal" in "this extremely critical phase of the pandemic."

Seibert said that violent clashes and the abuse of the right to demonstrate were not permissible and that there was no room for "extremist ideologies or conspiracy theories."

An Interior Ministry spokesman also slammed reported attacks on journalists, saying violence against reporters was an attack on the constitution. He however added that police had decided not to react with force to a group that had included violent elements but that had been mostly peaceful. 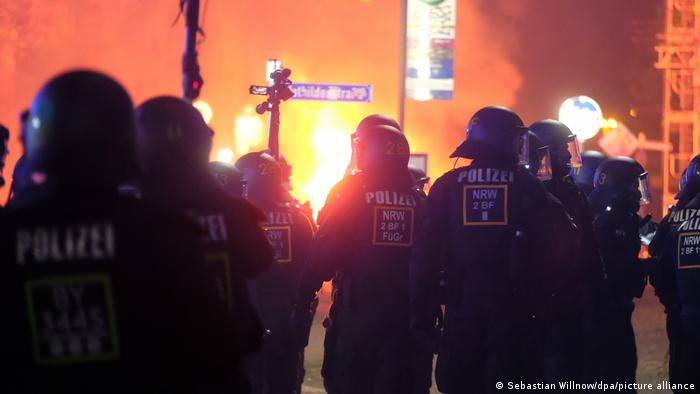 The premier of the southern state of Bavaria, Markus Söder, who is among the potential contenders to run for chancellor in next year's election as the conservative candidate, called for closer scrutiny of the group behind Saturday's demonstration, Querdenken (which roughly translates as Lateral Thinking or Think laterally).

"There is a right to demonstrate but no right to overrule health measures," Söder said, saying that authorities should look more deeply into the "Querdenken phenomenon" and what was driving it.

The president of the domestic intelligence agency (AfV) in the eastern state of Thuringia, Stephan Kramer, had harder words for Querdenken.

"Up to now we believed that this movement was a motley mixture with some right-wing extremist traits," he told the newspaper group Redaktionsnetzwerk Deutschland. But, he said, it was becoming "clearer and clearer that it has not just been hijacked by right-wing extremists, but that Querdenken itself is extremist."