Demonstrations in the eastern German city took place just days after the government announced new shutdown measures to curb surging infections. Protest leaders have sought to distance themselves from the far-right. 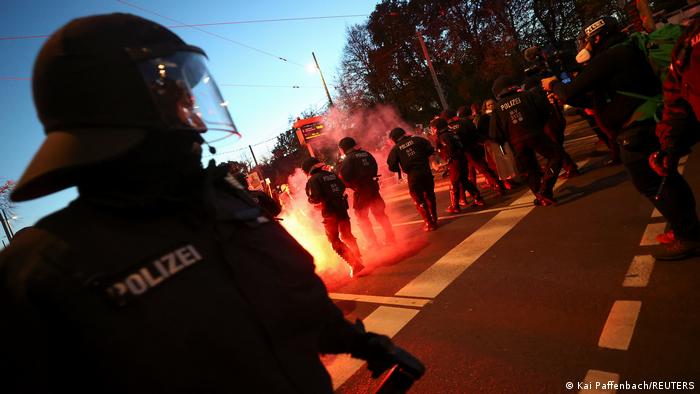 Protesters clashed with police in the eastern German city of Leipzig on Saturday after officers tried to break up a march against restrictions to curb the spread of the novel coronavirus.

"There were numerous attacks against security forces," police tweeted soon after they called the gathering unlawful.

German media broadcast images of projectiles and fireworks thrown at police who had established a security cordon near the city's main train station.

Several media outlets reported that some of the protesters who scuffled with police were members of far-right groups.

A few demonstrators clashed with counter-protesters, who gathered for a separate march, police said.

Despite police breaking up the demonstration and escorting people away, some protesters remained on the streets well into the night.

The journalist union DJU said there were also at least 32 attacks on reporters, primarily from members of the Querdenken (Lateral Thinking) movement, which organized the main protest. The group argues that the government's coronavirus restrictions encroach on citizens' rights. 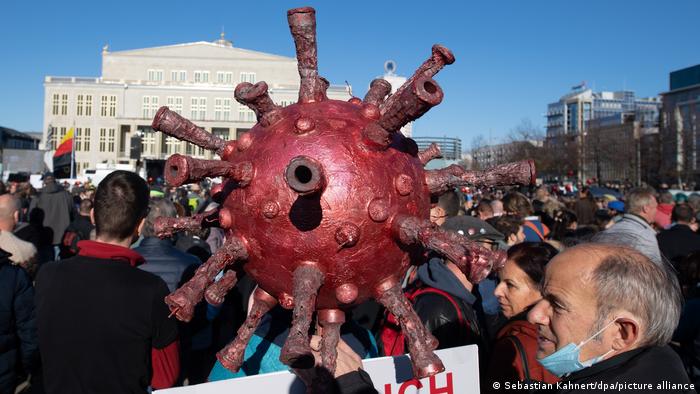 Some 20,000 people attended the protest, thousands more than authorities had expected. A police spokesperson said 90% of participants did not wear face masks or comply with social distancing rules in place to stem the spread of the coronavirus. Thus, the protest was shut down.

Germany reported a daily record of 23,000 new cases of the virus on Saturday, and a total number of 11,226 deaths.

Under new measures that came into force this week, bars, cafes and restaurants cannot have customers dine inside their premises until the end of the month. Theaters and cinemas have been forced to shut down entirely. While Germans will not be forced to stay home under the rules, only members of up to two households are allowed to meet.

A 65-year-old protester named Anne told the AFP news agency: "For me there is no virus, they cite the coronavirus crisis as a motive, but there are other things behind this."

City authorities had attempted to move the protest to Leipzig's trade fairgrounds in the north of the city, instead of the inner city area, citing the restrictions that protesters were against. But on Saturday morning, a court ruled in the demonstrators' favor.

"It is hard to explain that while only members of two households are allowed to meet, 16,000 people are allowed to demonstrate in a square," Leipzig city spokesman Matthias Hasberg told dpa.

According to local public broadcaster MDR, some protesters waved flags that recalled the German "Reich," which fell after World War I, a common sight among far-right protesters. Some members of the neo-Nazi NPD party were also reportedly present.

Querdenken founder Michael Ballweg told dpa on Friday that he has tried to distance his group from far-right members that have joined the protests in recent months.

Meanwhile, a court in the southern city of Munich on Saturday upheld bans against planned Querdenken protests on Sunday and in the coming week.

The eastern city of Leipzig is preparing for a major demonstration against the new government measures to combat COVID-19. Police face the challenge of maintaining order while respecting the right to protest.