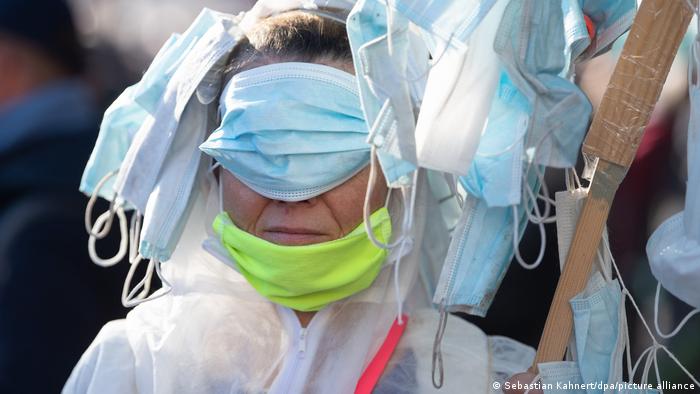 The premier of the southern German state of Bavaria, Markus Söder, has called for the domestic intelligence service to properly scrutinize the conspiracy-theorist "Querdenker" (lateral thinkers) movement.

In an interview Saturday with the regional newspaper Münchner Merkur, the conservative politician warned of a "growing conglomeration of right-wing extremists, Reichsbürger, anti-Semites and absurd conspiracy-theorists who accuse politics of satanism."

He said he hoped that the Office for the Protection of the Constitution, the domestic intelligence agency, would keep an eye on the movement, which is becoming "increasingly sect-like."

Söder was referring to the various groups that have taken part in protests across Germany against coronavirus restrictions.

Many of those involved consider the coronavirus pandemic to be a conspiracy and the virus itself to either be less harmful than commonly believed or even to not exist at all. 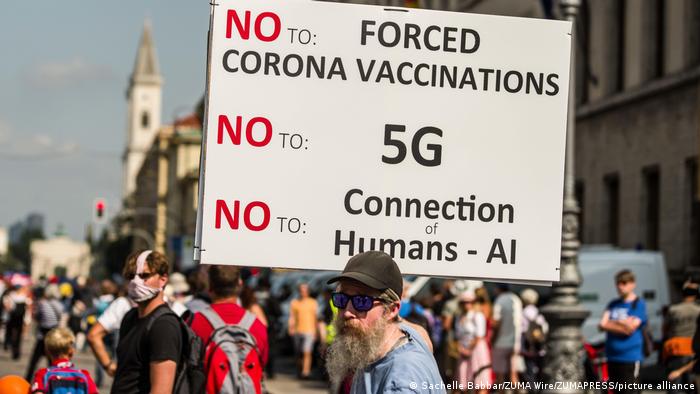 A protester marches with a banner saying "No to forced vaccinations, 5G and connecting humans to artificial intelligence

Söder also warned that the country had initially not taken the Reichsbürger movement seriously — a group of neo-Nazis who reject the modern German state and wish for a return to Germany's 1937 borders — but that this "completely absurd idea" had become a "serious danger" for the country.

"I have a bad feeling that some of the [so-called] lateral thinkers have similar ideas," he added.

Söder tweeted on Monday that: "The constitution guarantees the right to demonstrate. But that doesn't include the overruling of health protections. It's important that coronavirus measures are maintained everywhere. Even at protests! There are no special rules for 'lateral thinkers.'"

Konstantin von Notz, domestic policy spokesman for the Green party told the regional Südwestrundfunk radio station that there were "several indicators" that the conspiracy-theorist movement was turning against the rule of law in an "aggressive and hostile manner."

Von Notz announced that the parliamentary control committee would deal with possible anti-constitutional actions and statements from the ranks of the so-called lateral thinkers in its next session.

He added that Germany should be proud of being a country with freedom of speech, where people "can say stupid things," but that "when it comes to these anti-Semitic conspiracy ideologies, we had better look very closely."