As Donald Trump exits, QAnon takes hold in Germany | Germany | News and in-depth reporting from Berlin and beyond | DW | 19.01.2021 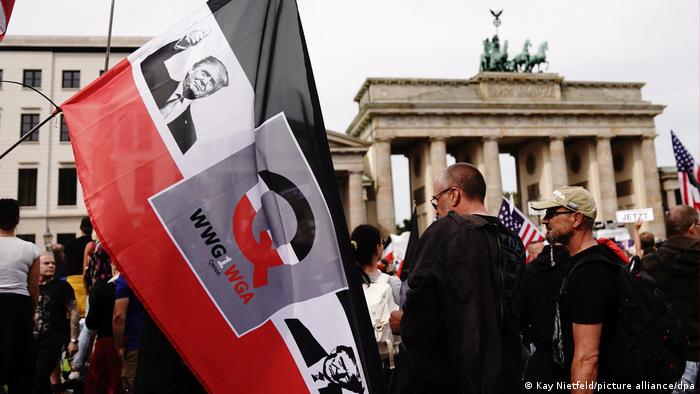 The German woman writes "danke" — or thank you — with seven As to emphasize her gratitude. She is moved, excited and inspired by the mob forming on Capitol Hill. In only a few moments, they would storm the seat of the US government.

"They are fighting in front of the Capitol for all of us! What brave people! Thaaaaaaank you!" She ends the message with three red hearts.

It's 7:31 p.m. in Germany — January 6. She posts her message on "QPatrioten24," a German Telegram group DW has been tracking over several months on the popular messaging platform.

Ardent backers of outgoing US President Donald Trump flood the group with messages of diehard support.

They believe their ideological leader won the 2020 US presidential election and insist he was robbed of that victory. From their perspective, Trump would take back what was rightfully his on January 6, the day Congress was set to formalize the results of the election.

Trump's "Stop the Steal" march is the moment they have been waiting for.

A member of "QPatrioten24" denounces "electoral fraud" in the US presidential election, likening President-elect Joe Biden's victory as a "coup." The member calls for "martial law" and prison for traitors "even in Germany"

QAnon is centered on the baseless belief that Trump is fighting the so-called deep state, child-trafficking elite, shadowy corporations and fake-news media. It's these evils, according to the conspiracy theory, that the US president has been waging war against — a war he will one day win.

The movement relies on cryptic messages posted by a user described as a political or military official claiming to have unprecedented access to Trump. This figure goes by the name Q, which refers to a security clearance offered by the US Department of Energy.

However, no evidence on Q's alleged identity or claims has been given. 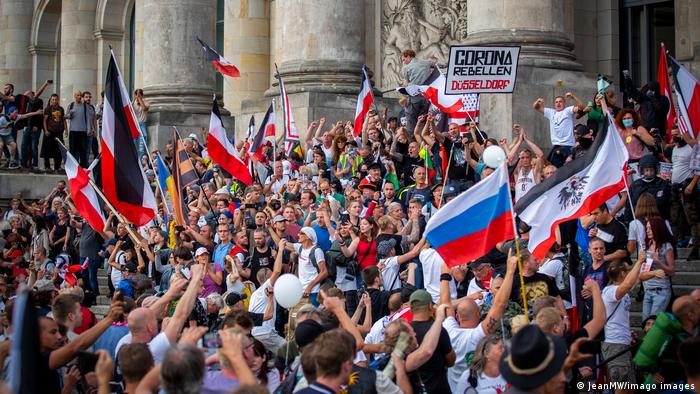 On August 29, far-right extremists, QAnon supporters and anti-lockdown protesters attempted to storm Germany's parliamentary building, occupying the steps leading up to the Reichstag. The event triggered widespread condemnation across the country

"True patriots, who won't allow their country to be taken," says one QPatrioten24 member, describing the crowds outside the Capitol.

As the evening of the Capitol siege progresses, the Telegram group exchanges images and video clips circulating online. Some of them question whether those who stormed the Capitol were truly Trump supporters, while others lament the killing of one of the protesters as "disproportionate and avoidable."

By the next morning, the flurry of reactions has given way to silence in the group. Around noon, an audio message from one of the administrators of "QPatrioten24" breaks the ice. It's a long one — 17 minutes of his reflections about the night before.

The man, whose identity is known to DW, speaks in German with a calm and steady voice. In the group, he calls himself Connectis, but outside his newfound digital identity, he is understood to be the managing director of a real estate firm near the capital Berlin.

His deep voice continues, detailing the upcoming "showdown," the "finale" that is about to take place, how the recent US election was the "biggest electoral theft in the history of humanity."

To Connectis, US President-elect Joe Biden is a criminal who could never be president. Not only will Trump "make sure of that," but so would "other patriots, also in the military."

Over and over again, he speaks about "treason" committed against Trump, about alleged evidence against Trump's opponents, which is now "fully completed." His monologue is as vague as it is perplexing.

The acronym WWG1WGA adorns the space below the audio clip of his rant. "Where we go one, we go all" — the mantra of the QAnon movement. 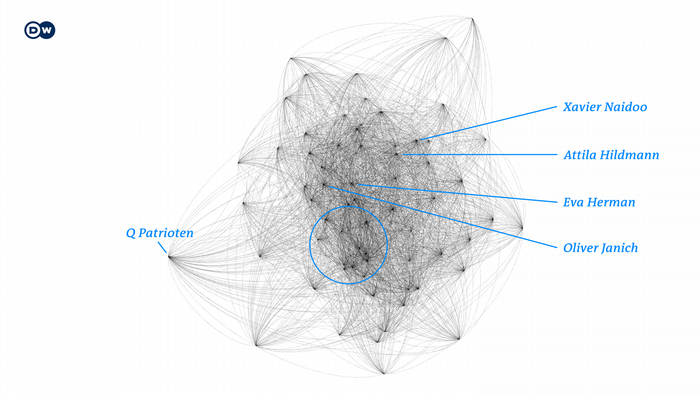 Although on the fringes of the vibrant German QAnon community on Telegram, "QPatrioten24" is deeply rooted in the country's wider conspiracy community.

At the time of publication, the group had more than 2,700 members, making it one of the larger fringe groups. It continues to attract new followers, having gained a hundred more members in the three days running up to publication.

The group's members are active in German anti-government protests, with some saying they were present on the day of the attempted storming of Germany's parliamentary building in August last year. When discussing protests, they urge each other to "show up without masks" and "no social distancing."

Although it's difficult to accurately assess how the group is composed, there appears to be a nearly equal split of men and women. Members come from across the economic spectrum — small business owners, actors, engineers, spiritual coaches and loan officers.

The group has shared content from more than 300 QAnon-adjacent Telegram groups in Germany, and is connected to a community of nearly 5,000 more conspiracy, extremist and COVID-skeptic groups.

Messages within the group have been shared by some of Germany's most prominent conspiracy theory and far-right influencers, such as well-known former news presenter Eva Herman, whose network reaches more than 170,000 users.

A little over half of the members of "QPatrioten24" are active participants in the Telegram group, posting messages ranging from the denial of the coronavirus pandemic to anti-vaccine propaganda. At times, members express extreme anti-Semitism, including making light of the Holocaust.

At one point, Connectis shared an article claiming survivors of the Holocaust would receive additional aid during the pandemic: "More than 70 years of robbery of Germans!" his caption read, "This has to stop!"

DW spoke on the phone to the man understood to be behind the alias Connectis, and emailed him for comment on his role within the Telegram group. In the phone call, he did not confirm or deny he was the user Connectis — and said he would answer only written questions. He did not reply to DW's subsequent emailed request for comment. 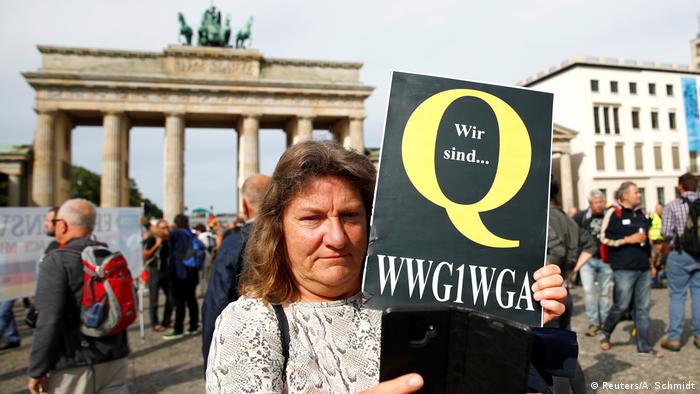 Men and women are equally represented in the Telegram group "QPatrioten24"

QAnon in Germany: Growing by the day

Prior to 2020, the QAnon movement was largely considered a niche phenomenon in Germany. But within a year, Germany has become home to the largest QAnon community outside of the English-speaking world.

The German government's response to the coronavirus pandemic, such as lockdowns and social distancing measures, prompted QAnon influencers and far-right sympathizers to stoke fear and propagate the movement's conspiracy theories on social media platforms.

The Dubai-based messenger service Telegram became particularly popular among QAnon supporters, largely as a result of its lax policy towards cracking down on extremist content.

In December, the Berlin-based Amadeu Antonio Foundation found that German QAnon groups and channels hosted on Telegram had experienced significant growth during the first lockdown of the pandemic in March 2020.

Back then, Qlobal — now today's largest German-language QAnon channel — had roughly 21,000 subscribers. Three months after, it had garnered more than 110,000 users. The channel now boasts more than 160,000 followers, with other QAnon groups and channels mirroring the rise in interest.

According to estimates provided by the Amadeo Antonio Foundation, there are at least 150,000 QAnon followers in Germany — and that figure is steadily rising. However, gauging the size of the QAnon community is difficult, largely because estimates lean on public online engagement. 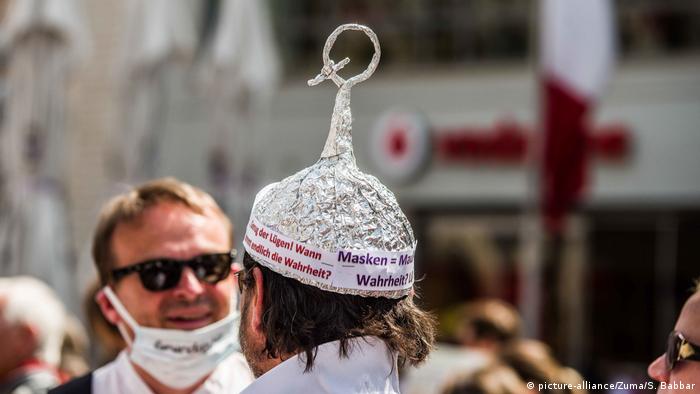 Ardent supporters of conspiracy theories are increasingly taking anti-government sentiment to the streets. Authorities are concerned about the potential for these groups to spur extremist action and radicalization.

The elusive plan: 'Events will take their course'

In the Telegram group "QPatrioten24," opinions began to splinter after the storming of Capitol Hill. Is it the end for Trump? Or is it all part of the ominous plan heralded by Q? It is an elusive plan that no one truly knows, save for the so-called political insider Q — and yet, it is what the movement is built on.

Some users have begun expressing doubt. The phrase "there is no plan at all" creeps into the group.

But someone is always ready to respond.

"Separate the wheat from the chaff, now that everyone has outed themselves: Patriot or traitor. Now the base of the pyramid is removed. Everything is going according to plan," writes one user a day after the storming of the Capitol.

Connectis, who appears to be the group's chief administrator, is fueling this belief with cryptic messages. As Biden's inauguration inches closer, he posts another audio message.

The military forces assembled for the inauguration in Washington, he says, could "arrest the alleged winner of the election, Biden, and make sure it all goes down smoothly."

For those committed to the movement, there is no room for failure — nor Trump's departure from the White House. "In my view, there is no other option," Connectis says with conviction. 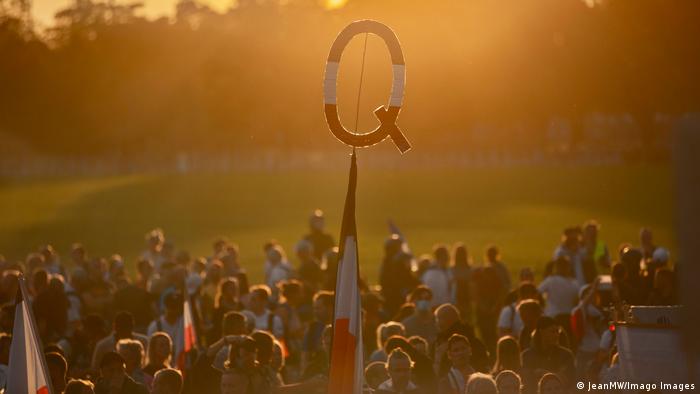 QAnon supporters leave little room for doubt with regards to the conspiracy theories they eschew.

Authorities struggle to pin down QAnon

In 2019, an internal FBI document obtained by American news outlet Yahoo! named QAnon among a host of conspiracy theories with the potential to push violent extremists toward action, describing them as a domestic terror threat. Yet, the document was far from an official designation.

In Germany, despite growing pressure, only a handful of authorities have acknowledged the risks posed by QAnon supporters, such as the Office for the Protection of the Constitution (BfV), Germany's domestic intelligence service.

The problem authorities face, however, is pinning down a movement that is as fractured and diverse as QAnon — a movement that attracts organized violent extremists as well as supporters only interested in following developments from the comfort of their living room.

In the QPatrioten24 group, both are present. At times, there are calls for radical action against the state — as well as nonchalant skepticism over the COVID pandemic.

"The potential number of QAnon adherents cannot be quantified by the BfV since non-extremists also advocate the theory, and adherents of the theory do not develop an aspirational character, for example, in the form of an association of people," a BfV spokesperson told DW.

For now, the BfV has established a task force to consider how to classify conspiracy theories and protest movements that pose a national security risk.

A member of "QPatrioten24" writes on the day protesters stormed the Reichstag: "Do you still believe that you can overthrow the system without violence? You will not be able to overthrow this system with your cardboard signs and peaceful calls. In a 'war' one must also bring sacrifices!"

At the state level, authorities have also expressed wider concerns over how conspiracy-driven movements could spur actions similar to the storming of the US Capitol building.

The incident was considered an emblematic moment for far-right extremists in the country, drawing comparisons to the 1933 burning of the Reichstag that gave rise to Nazi Germany.

According to the QPatrioten24 chat, group members were also present at the attempted breach of the Reichstag building in Berlin last year. Content posted by Connectis suggests that he, too, was at the protest where the attempted storming occurred, according to an analysis conducted by DW.

As Germany begins a pivotal election year — with six state elections and a federal general election — authorities are concerned by the increasingly risky actions conspiracy groups are taking, and the effect such groups can have on society.

"Even if there is no concrete evidence of copycat action so far, the growing hostility to the government, especially among coronavirus deniers, and the ongoing attempts by right-wing extremists to instrumentalize protests for their own purposes, harbors the risk of fomenting radicalization," said the spokesperson for North Rhine-Westphalia's Interior Ministry.