Arnold Schwarzenegger joined those calling out Donald Trump for his role in the Capitol riot. Melania Trump issued a statement rejecting the violence, but criticized "personal attacks" against her in the aftermath. 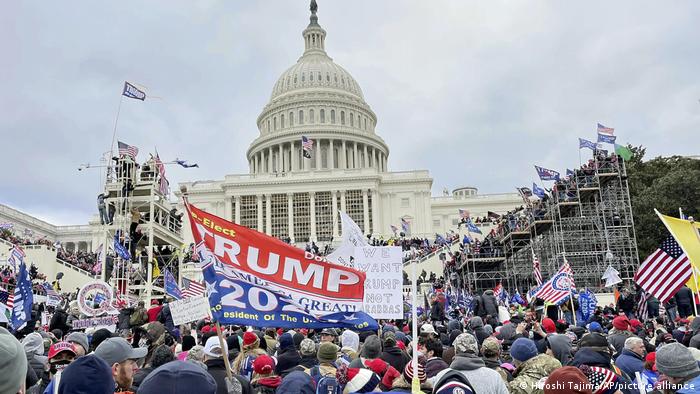 US President Donald Trump entered his last 10 days in office on Monday as new details from the Capitol siege came to light and members of his own party turned on him.

The White House lowered its flag to half-staff on Sunday to honor Brian Sicknick, the Capitol police officer who was killed during the violence at the Capitol building in Washington on Wednesday.

The move came only after days of protest from Democrats and Republicans alike regarding the lack of response from the president. Trump has so far made no public comments on the officer's death.

At the same time, Democratic Representative Jason Crow revealed that at least 25 cases of domestic terrorism had been opened against supporters of the president who participated in Wednesday's riots.

The Justice Department also made two further arrests on Sunday.

Trump was left even more isolated as former allies turned on him — or saw their donations cut for siding with him, Democrats moved ahead with plans to impeach him, and a second Republican senator, Pat Toomey of Pennsylvania, called for his resignation.

The president had already turned on his vice president, Mike Pence, for refusing to overturn the confirmation of Biden's victory — something he did not have the power to do — leading to some of Trump's supporters calling to "Hang Pence!"

Austrian-born bodybuilder and former California Governor Arnold Schwarzenegger, a Republican, released an impassioned video on Twitter comparing the events in the Capitol with the Night of Broken Glass — a pogrom organized by the Nazi party in Germany in 1938.

Trump was reportedly planning to visit the Alamo on Tuesday — the famed site where a small group of Texans seeking independence defiantly held a fort against a much larger Mexican army for 13 days before finally being defeated in 1836.

It is unlikely that the trip will do much to help his public image. A poll released on Sunday by ABC News revealed that 56% of the population thought that Trump should be removed from office while 67% considered him largely responsible for the mob violence.

The White House has issued no statements since its last one, on January 7, condemning the attack on the US Capitol.

First Lady Melania Trump was the first person close to the president to send a message to the American people. "I am disappointed and disheartened with what happened last week," she said.

But she also took aim at what she saw as personal attacks in the wake of the events.

"I find it shameful that surrounding these tragic events there has been salacious gossip, unwarranted personal attacks, and false misleading accusations on me — from people who are looking to be relevant and have an agenda," Trump said. She called for unity and urged the nation to "heal in a civil manner," while distancing herself from the actions of her husband's ardent supporters.

"Make no mistake about it, I absolutely condemn the violence that has occurred on our Nation’s Capitol. Violence is never acceptable," she affirmed.

Security forces have faced criticism for allowing the US Capitol to be breached. Democrat Representative Maxine Waters slammed the chiefs of the Capitol police department, saying that officers were "left naked" as the mob overwhelmed them.

Police officials were questioned about why they were surprised by the riots after the president had used increasingly aggressive language to urge his supporters to go to Washington.

The department had failed to bring in extra officers for the protest, leaving the same number on duty as on a routine day. Some police officers had been equipped for a protest, but none were ready for a riot.

Furthermore, a police lieutenant had ordered the officers not to use deadly force when dealing with the rioters, leaving them with little ability to resist the violent crowd.

The police were heavily criticized for failing to prepare properly and for their different approach to the Black Lives Matter protests in the summer.

The Capitol police chief, Steven Sund, and the sergeants at arms for both the House and the Senate stepped down following Wednesday's violence.

Sund said the blame lay with congressional security. He told The Washington Post that officials had been reluctant to take steps to formally put the National Guard on call before the event, despite pleas from Sund, who was worried about larger crowds than at previous demonstrations.