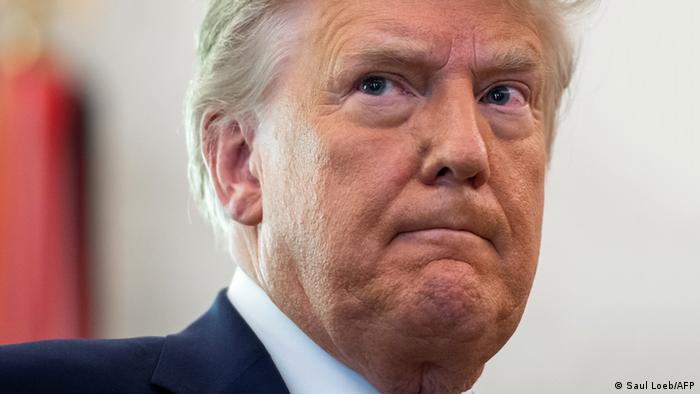 Democrats launched a bid on Monday to impeach President Donald Trump for a second time over his role in last week's attack on the US Capitol.

House Speaker Nancy Pelosi has said Democrats will proceed with impeachment proceedings if the US vice president refuses to declare Trump unfit for office.

What happened in the House?

Republicans swiftly objected to the move, blocking it from being immediately voted on.

Democrats responded in kind by introducing an article of impeachment against Trump, charging him with "incitement of insurrection" after his supporters stormed the US Capitol on Wednesday.

Lawmakers in the House of Representatives could vote on the Pence measure on Tuesday, after Republicans blocked it.

If the appeal to Pence fails — which is considered the most likely outcome, the Democrat-controlled House will press forward with plans to impeach Trump.

A vote on moving forward impeachment proceedings could take place as soon as Wednesday.

How does impeachment work?

If impeachment proceedings are launched, lawmakers in the House will vote whether to bring charges — known as the "articles of impeachment" — against Trump.

If a simple majority of the House's 435 members votes in favor of the charges, the process moves to the Senate. A two-thirds vote in the chamber is needed to convict and remove a president — but with Trump leaving office in a matter of days, removal isn't the high priority.

Should the house vote to impeach (or charge) Trump, there's a high possibility that he would be disqualified from future public office — barring him from running for president again.

What have Democrats been saying?

House Speaker Nancy Pelosi said on Monday lawmakers would give Pence 24 hours to respond if the measure urging him to act is passed.

If the measure fails or there is no response, the House will move forward with its impeachment motion.

"As our next step, we will move forward with bringing impeachment legislation to the Floor.  The President's threat to America is urgent, and so too will be our action," Pelosi said in a statement.

She also criticized House Republicans for objecting to their first motion, saying they were "enabling the President's unhinged, unstable and deranged acts of sedition to continue.  Their complicity endangers America, erodes our Democracy, and it must end."

Democratic President-elect Joe Biden has not taken a position on Trump's impeachment, saying he will leave it to Congress to decide.

He did, however, speak with Senate leaders on Monday about the chamber splitting time between potential impeachment proceedings and getting his Cabinet nominations approved.

While the Democrats aimed to swiftly proceed with impeachment, they were planning to delay the trial until after President-elect Biden had had time to focus on other priorities after inauguration.

How have Republicans responded?

Trump has been largely silent in recent days, holding no news conferences and making few statements.

Twitter banned him from their platform over his use of language that could incite violence.

Marco Rubio, a Republican senator from Florida, criticized the Democrats for wanting to "talk about ridiculous things like: 'Lets impeach a president'" a few days before he is set to leave office.

Although some lawmakers have stood by the president, there are growing calls for Trump to resign within the Republican party.

Trump, who is scheduled to leave office on January 20, has received sharp criticism following the violence in and around the US Capitol building on Wednesday.

Trump has been accused of inciting the violence, by addressing a large rally on the National Mall in front of the US Capitol, saying he would join them when they "walk down to the Capitol" earlier that day.

Since losing the November 3 election, Trump has falsely claimed he was the victim of widespread fraud.

Pelosi told American broadcaster CBS in an interview on Sunday that "the person that's running the executive branch is a deranged, unhinged, dangerous president of the United States."

Trump was previously impeached under two articles: abuse of power and obstruction of Congress in regards to allegations that Trump sought to discredit then-Democratic candidate Joe Biden in the lead up to the 2020 US presidential election.

The Republican-controlled Senate did not find him guilty of either article. A two-thirds majority is required for a conviction.

Arnold Schwarzenegger joined those calling out Donald Trump for his role in the Capitol riot. Melania Trump issued a statement rejecting the violence, but criticized "personal attacks" against her in the aftermath.