US Capitol storming: What you need to know

World leaders and former US presidents condemned the violence on Wednesday night. Some Democratic lawmakers said they were drawing up plans to impeach President Trump for a second time. 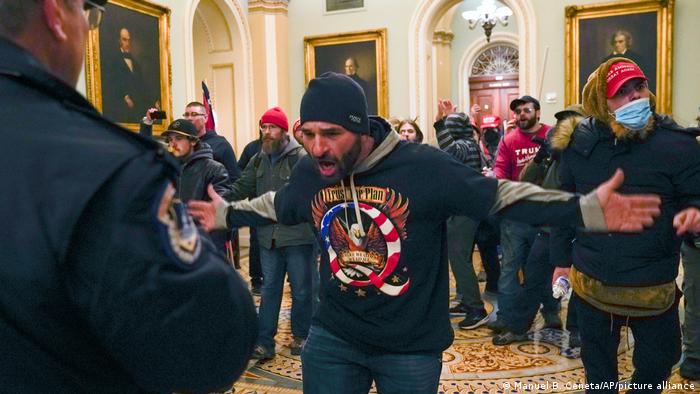 A group of angry Donald Trump supporters stormed Capitol Hill on Wednesday and clashed with police in violence that left four people dead. They were attempting to prevent the confirmation of Joe Biden's election victory.

They descended on the US Capitol after Trump made a speech to his supporters, imploring them to "fight'' to stop the "steal"' of the election.

Here's an overview of what happened next.

How many casualties were there?

US Capitol Police later released a statement confirming one of their officers had also died of injuries sustained during the riots.

How did police try to restore order?

Police are guarding the streets to enforce a 14 day curfew, issued by Washington D.C. Mayor Mayor Muriel Bowser. The curfew runs from 6 p.m. to 6 a.m.

Some 1,000 troops from the National guard have also been deployed.

Police said 52 arrests were made Wednesday. Four were related to weapons charges and six firearms were recovered.

How did President-elect Joe Biden respond?

Biden called it an "insurrection” that "borders on sedition." He said the words of a president matter and "at their best, can inspire," but also "at their worst, incite." He implored President Donald Trump to go on national television to "demand an end to this siege."

In a post to Twitter, which has since been deleted, Trump called for "peace" and told the rioters to "go home." However, he praised his supporters as "special." He repeated falsehoods the election had been stolen and encouraged his supporters to "remember'' the day.

In a first post since being locked out of Twitter, Trump on Friday condemned the "heinous" attack on the US Capitol and pledged a "smooth" transition of power to the Biden administration.

What did Trump's allies say?

Vice President Mike Pence formally presided over the session counting the electoral votes. He rejected Trump's claim he had the power to reject electors that have been "fraudulently" chosen.

"To those who wreaked havoc in our Capitol today — you did not win," he said after reopening the disrupted session in the Senate.

What are Democratic lawmakers saying?

Top Democrats Alexandra Ocasio-Cortez and Ilhan Omar said President Trump should be impeached for inciting violence. Representative Omar said she was drawing up a bill to impeach Trump before he leaves office.

What did Trump's predecessors say?

Former President Barack Obama called the violence "a moment of great dishonor and shame for our nation." George W. Bush, the 43rd Commander-in-Chief, likened the clashes to an  "insurrection." Bush said in a statement that “this is how election results are disputed in a banana republic.”

What has been the reaction of other world leaders?

German Chancellor Angela Merkel said the violence made her "angry and sad."

"I regret very much that President Trump not acknowledged his defeat since November and also again not yesterday. Doubts about the election outcome were stirred and created the atmosphere that made the events of last night possible."

German President Frank-Walter Steinmeier said the riot in the Capitol showed a "contempt for democracy."

"These scenes we've seen are the result of lies and more lies, of divisiveness and contempt for democracy, of hatred and incitement - even from the very highest level," Steinmeier said.

Police treated the rioters at the US Capitol very differently from Black Lives Matter protesters last summer. Many critics believe they were more lenient on Wednesday because the crowd was mostly white.

'Coup' in the US Capitol sparks celebrity fury on Twitter

As Donald Trump supporters stormed the Congress in Washington DC on Wednesday, luminaries of film, music and literature weighed in on the political chaos.

After a dramatic day of violence at the US Capitol, the House of Representatives and the Senate have confirmed Joe Biden's presidential victory. Donald Trump later promised an orderly transition of power.