World leaders called the actions of Trump supporters a "disgrace," and an attack on democracy. Many urged for restraint, calling for the results of the US election to be upheld. 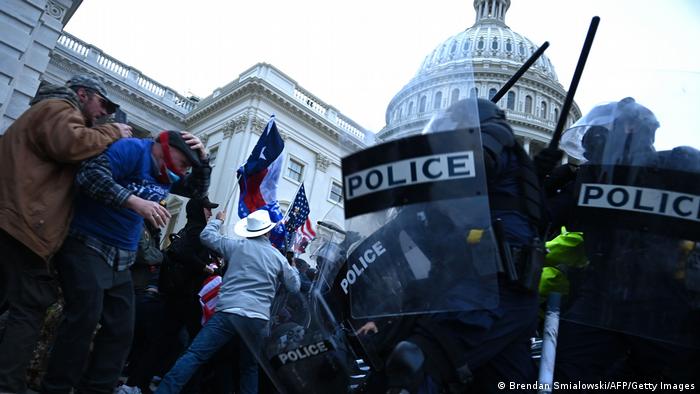 Leaders across the world expressed shock over a violent mob of Trump supporters breaking into the US Capitol building, and demanding that the election results be overturned on Wednesday.

German Chancellor Angela Merkel said she was "furious and saddened" by the events and said Trump shared blame for the unrest.

"I deeply regret that President Trump has not conceded his defeat, since November and again yesterday," she said.

British Prime Minister Boris Johnson called the scenes in the US capital a "disgrace," and called for a peaceful and orderly transfer of power.

French President Emmanuel Macron responded to Wednesday's violence at the US Capitol, saying he has confidence in the strength of democracy in the US.

"What happened in Washington is not American," Macron said in a short video speech posted on Twitter.

In Jerusalem, Israeli Prime Minister Benjamin Netanyahu said the "rampage at the Capitol yesterday was a disgraceful act and it must be and it must be vigorously condemned."

"I have no doubt that American democracy will prevail," he said during a meeting with outgoing US Treasury Secretary Stephen Mnuchin. "It always has."

"What we saw in the United States yesterday (Wednesday) evening and today shows above all how fragile and vulnerable Western democracy is," Iranian President Hassan Rouhani said in a speech broadcast by state television.

European Union leaders such as Ursula von der Leyen and Charles Michel also took to Twitter to condemn the unrest, while urging a peaceful transition of power.

Canadian Prime Minister Justin Trudeau said his country was "deeply disturbed and saddened" by the violence in Washington.

"Violence will never succeed in overruling the will of the people," he tweeted.

Canadian Foreign Minister Francois-Philippe Champagne expressed deep shock over the situation. "The peaceful transition of power is fundamental to democracy — it must continue and it will. We are following developments closely and our thoughts are with the American people.''

Swedish Prime Minister Stefan Lofven condemned the attacks on the Capitol. "President Trump and many members of Congress bear significant responsibility for what's now taking place. The democratic process of electing a president must be respected," he said.

NATO Secretary-General Jens Stoltenberg condemned the "shocking scenes" from the US capital, saying the outcome of the presidential election must be upheld.

Former US President George W. Bush and his wife Laura said they were sickened and heartbroken by the scenes arising out of the US Capitol building. Bush said the actions were "undertaken by people whose passions have been inflamed by falsehoods and false hopes.''

"The match was lit by Donald Trump and his most ardent enablers, including many in Congress, to overturn the results of an election he lost." said Clinton.

Trump's predecessor, former President Barack Obama, blamed Trump for inciting violence, in what he called "a moment of great dishonor and shame for our nation."

Obama said that Republicans have a choice to "continue down this road and keep stoking the raging fires, or choose reality and take the first steps toward extinguishing the flames."