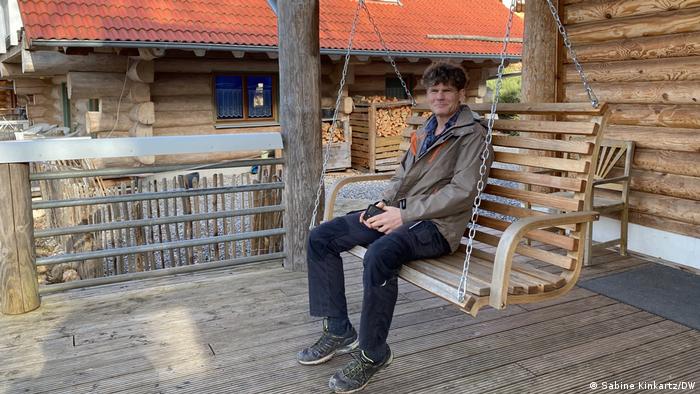 At first glance, Jan Lehmann is a man with a jolly, confident air. The 54-year-old lives in the Eifel, a hilly region in western Germany that is famous for its beautiful nature: Mountains, valleys, small rivers and lakes, rock formations and miles and miles of forest.

Two years ago, Lehmann started his own business with his wife, Sandra. They rent out 18 vacation homes that they lease, along with the land and forest that go with them. They have a 15-year contract with the properties' owner, who has insisted on full payment of the lease even in lockdown.

A few of the houses, made of thick Canadian-looking tree trunks, stand in the small village of Gemünd on the edge of the Eifel National Park. In front of the roofed terraces, the little river Urft gurgles, and the birds chirp. It is especially quiet — no guests have checked in here since early November.

"From the time of the first lockdown in spring 2020, we've been closed for six months altogether and had no income in that time," says Jan Lehmann gloomily as he looks up into the tall trees. 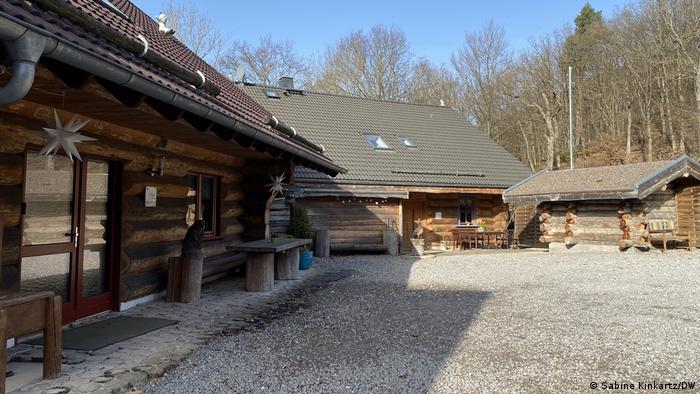 The vacation homes are deserted, no guests have checked in since November

"Do you actually know what it's like to see politicians and virologists on talk shows saying that vacation rentals are safe places in this pandemic?" he asks bitterly. "Decision-makers have recognized the senseless nature of the closures, and yet we're not allowed to operate."

He finds it increasingly difficult to motivate himself, Lehmann says, looking powerless.

"You can't imagine what that does to you." Sometimes in the morning, Lehmann wonders why he still has to get up. Above all, it's the inability to plan ahead that wears the couple down.Since the end of October 2020, politicians have repeatedly given dates when the lockdown was supposed to end. Instead, it has been extended each time.

"Politicians are leading 'by sight,'" Lehmann said. "But for us, that means we have to keep taking bookings and then canceling them and refunding the money." 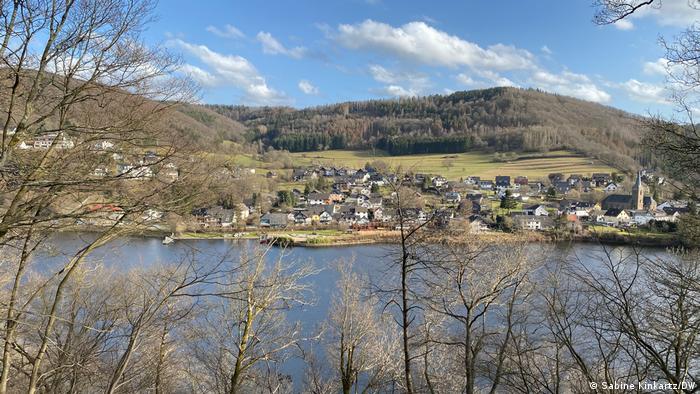 The hilly Eifel region relies on tourism all year long

Fear for the existence

During the Christmas vacations and over the start of the new year the vacation homes would normally have been fully booked. Since then, heavy snow and, since mid-February, exceptionally warm weather have attracted people to the Eifel.

"Guests call and ask us if we can't make an exception so that people can stay and relax here for a few days, but we're not allowed to," Jan Lehmann said.

With every week of lockdown, Jan Lehmann and his wife fear more for their existence. The reserves built up in the summer of 2020, when business was booming, have been used up and the promised government aid is a long time coming.

"The money comes with three months delay. And if anyone thinks it is enough — I'm afraid they're wrong." Costs are only 90% covered, he said, and there is no provision for contractors' salaries. 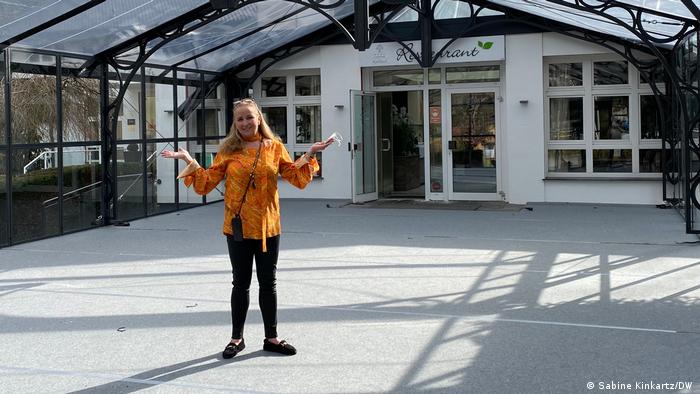 Bottom of the pile

Last spring, he unsuccessfully tried to sue in court to reopen his company. Now he wants to try that again. The Easter vacations begin at the end of March, and all the houses are fully booked.

"If there is still a ban on accommodation at Easter, it will be extremely damaging for us," said Jan Lehmann. When asked what he will do if it comes to that, he shrugged his shoulders and laughed bitterly for a moment. He didn't want to think about that.

Hotel owner Manuela Baier is already one step ahead. "We will still be closed at Easter," she is convinced.

For six years, Baier and her husband have been running the Kallbach conference and wellness hotel in the Eifel village of Simonskall, 30 minutes drive from Gemünd.

"I can do the math," says Baier, who was on the board of a large fashion company before starting her own business with the hotel. "If the schools open and then we wait two weeks to see how the new infections develop and only then will other businesses be allowed to open — then Easter will almost be upon us."

Baier, 54, could remember an evening in early February when she watched a TV interview with the German chancellor. Angela Merkel talked about the perspectives for reopening and mentioned schools, universities, private contacts, cinemas, theaters, and sports clubs.

She only brought up overnight accommodation at the very end. " .... and one day also the hotels," the chancellor said.

"That's when I turned off the TV, and since then I've been dreaming about that sentence at night," says Baier, who is currently counting on being allowed to reopen in May.

Financially, that will be a nightmare. Her 21 employees are on Germany's short-time work scheme, but the hotel drains money even when it's shut down: heating, electricity, insurance.

"If I ignore the place for a few months, everything will get moldy," Baier explained. Twice a week alone, all the water pipes in the 52 rooms have to be cleaned to prevent an infestation with Legionnaires' disease.

Another decade of work?

Even the government aid Baier receives is not enough to make ends meet. The hotel has hardly any reserves because the profits have always been re-invested — in the renovation of the rooms or the expansion of the wellness area.

"I have had no salary since October, but I pay €700 ($850) a month for my health insurance alone," complains the entrepreneur. She lives off her private savings, which were actually intended for retirement. "I already know that I will have to work 10 years longer than planned."

Right now, the "Orangerie" is being dismantled, which Baier had set up on the restaurant terrace in October in order to be able to guarantee social distancing between the guests even in the winter months. It cost her €35,000 of the temporary building, €8,000 went on the electrician, who had to lay 350 meters of power cable for the lighting and the heaters.

"I kept procrastinating with dismantling it because I believed in the lockdown periods mentioned by the politicians," Baier said. 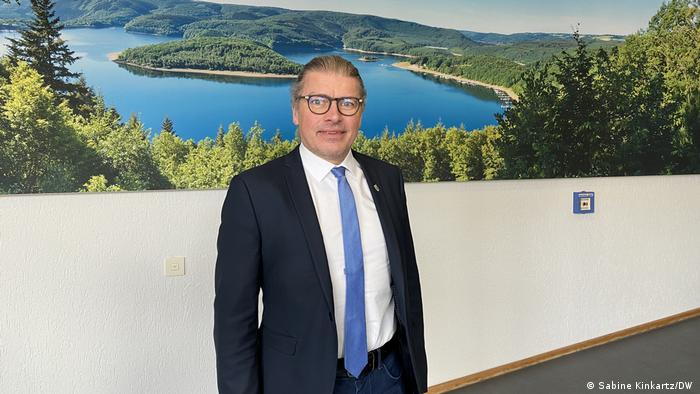 'Politics has lost me'

No safe planning, no reliability, too many disappointments — this has also affected Baier and changed her, in her own words.

"These constant lockdown extensions rob you of your strength. Politics has lost me." She had done everything that was required of her: fulfilled all hygiene requirements, meticulously adhered to the regulations. "I don't see what we could have done better."

The country hotel is located on a path that leads to a hiking area. For weeks, Baier has had to watch hundreds of walkers pass by her house, especially on weekends. Many of them use the empty hotel parking lot to take a break and picnic here.

"Do you know how painful it is to watch that?" Baier asked resignedly.

Bernd Goffart, the mayor of Simmerath, one of the larger Eifel communities, fully understands the hotel owners' grievances.

"Every bed that is not occupied now is a waste. What they don't generate now, they can't make up later," he said. The same goes for the restaurants and other tourist facilities that are closed.

But the rush of day-trippers is a cause of concern for Goffart.

"Everything is closed and people still come." Especially on the well-known hiking trails, he said, there are far too many people on weekends than there should be in the coronavirus pandemic.

"That's when I am of two minds: I'm usually happy about every guest — but not anymore," he said.

An opportunity for the Eifel region

Plans are underway in the community to better manage the traffic. Beyond the tourist centers, he says, there are still many areas that are virtually deserted.

In the medium and long term, the mayor also sees the pandemic as an opportunity for the Eifel.

"Many people who vacationed here for the first time last year saw how beautiful it is," he said. His region can only benefit from that — when the pandemic is over.

The COVID pandemic brought the global travel industry to a standstill. Despite restrictions and warnings, some travelers are packing their bags again and heading to regions that promise safety and a vacation from COVID.