According to a draft proposal, the lifting of measures could be tied to a seven-day incidence rate. The lawmakers are also reviewing the country's testing and vaccine strategies. German Chancellor Angela Merkel met with the 16 state premiers on Wednesday to discuss the gradual easing of coronavirus curbs in the country.

Though some measures could be lifted, most of the current restrictions are expected to be extended until March 28.

With elections coming up in September, Merkel and the nation's leaders are under increasing pressure to offer plans to restore a sense of normalcy after four months of shutdowns.

According to a draft proposal seen by the German news agency DPA, the next round of easing could be tied to a seven-day incidence rate of 100. The incidence rate is a metric that records the number of people infected per 100,000 people during a one-week period.

If this level is reached, states could consider allowing retailers to reopen with "click and meet" times for shoppers.

Museums and zoos could also welcome back visitors by appointment.

What else are Germany's top lawmakers discussing?

Additionally, they will talk about plans to boost the country's slow vaccine roll out. So far, only around 5% of the population has received a first coronavirus vaccine shot.

"For the next several weeks and months, if infection levels remain stable, there will be a four-pronged approach of vaccination, testing, contact tracing and openings," a draft resolution said.

Are restrictions being lifted too early?

COVID-19 Special: Are lockdowns being lifted too early?

To keep the risk of rising infection rates low, people may be entitled to at least one free rapid test per week, according to the draft proposal.

In an earlier version, the government had considered the possibility of offering two free rapid tests per week.

The free test should be offered to "all asymptomatic citizens," according to the draft, released on Wednesday morning. Systematic testing will also take place within workplaces and in schools and day care centers as part of the new national testing strategy, which will be implemented gradually through the start of April.

The plan will also allow certain doctors' offices to offer the inoculation.

Ahead of the talks, several politicians had called for a speedier vaccination campaign. "Every vaccinated person is one less risk," North Rhine-Westphalia State Premier Armin Laschet said.

Berlin Mayor Michael Müller called for the immediate inclusion of doctors' offices in the vaccination campaign.

It was unclear whether contact restrictions would be relaxed over the Easter holidays to allow for family visits.

COVID on the French-German border

Andrew Ullman, the spokesperson for the German parliament's health committee, told DW that he supports a step-by-step reopening of Germany.

"We're not talking about a radical opening. That is not possible, but locally we could do these things," he said, such as opening shops and reducing social contact restrictions.

The lawmaker, a member of the Free Democrats who is also a trained physician, said his party wanted to find a way to keep up prevention measures without enforcing a full shutdown. 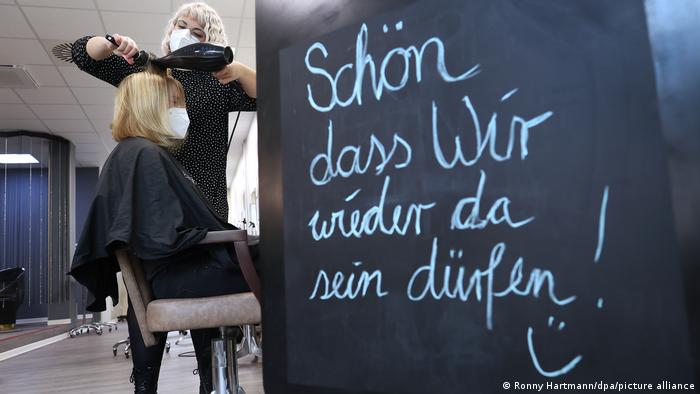 Germany moved ahead with the first reopening steps this week. On Monday, hairdressers were able to open after a two-and-a-half month break. Meanwhile, some German states also allowed businesses such as florists and hardware stores to open on Monday.