COVID: Germans rushing to the hairdressers′ | Germany | News and in-depth reporting from Berlin and beyond | DW | 01.03.2021

Germany: Back to the hairdresser — back to normality?

Stefan Sorce has brought along some sparkling rosé to mark the occasion. He's a regular at the hair salon "Nikos Friseure" and he's first in line when owner Nikos Kasapidis picks up the scissors again for the first time in two and half months. "It's an honor," says Sorce jovially as he walks into the shop in central Bonn.

Barbers and hairdressers nationwide have been closed in Germany since December 16, 2020. They were ordered to close by the authorities in their desperation to stem the tide of coronavirus infections. Two weeks ago, they breathed a sigh of relief when it was announced that they could open again on March 1. "The day they announced it we had something like 60 phone calls," said Kasapidis. He, his three employees and two apprentices are fully booked until the end of the month. 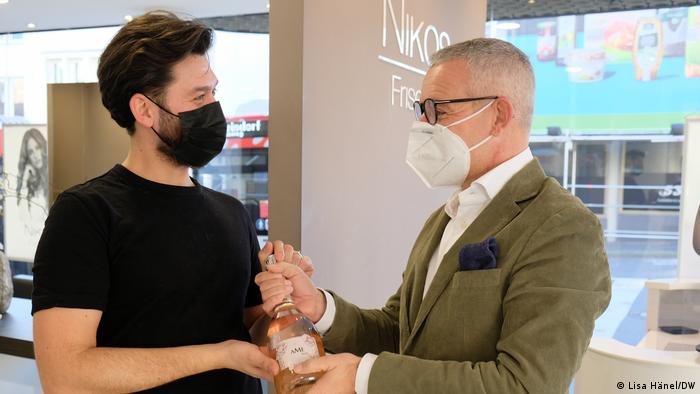 Stefan Sorce picked up the phone and called up "Nikos Friseure" to make an appointment as soon as he heard the news. It took less than half an hour to sort out his somewhat graying hair. "It's just a nice feeling," he says, adding that his wife had to help out with the hair trimmer during lockdown. For shop owner Kasapidis, cutting people's hair is like riding a bike: You don't forget how to do it. "I've been doing this for twelve years; two and a half months' break don't make that much difference. No problem," he says.

Kasapidis (30) opened his own salon at the young age of 26. He made the risky move of taking on two apprentices in August 2020, right in the middle of the crisis. Despite the fact that he has yet to see any of the government aid promised for January and February and had to forfeit his lucrative Christmas trade, Kasapidis remains optimistic, "Luckily, we have managed to get by," he says. Nevertheless, the situation forced him to put his staff on short-time work. 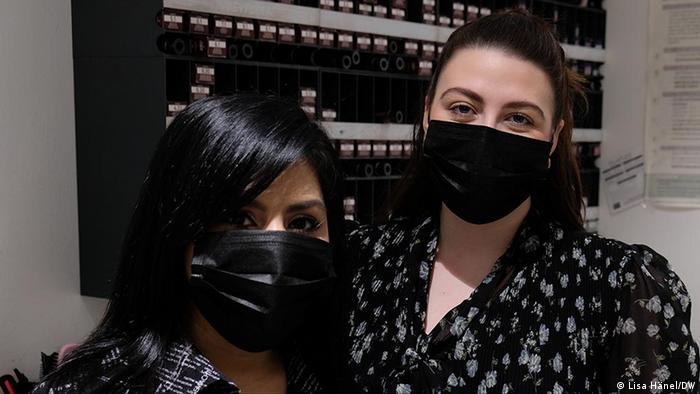 His staff are eagerly anxious to get back to business. "It's a bit like my first day at work," says hairdresser Melis Düzgün. "Getting closed down was strange. We had to drop everything all at once." Apprentice Joleen Märzhäuser adds: "I'm nervous because there are a lot of customers coming. But I'm also looking forward to it."

There is no sign of panic in the salon, though. Kasapidis takes it all in stride. Though, some hairdressers around Germany were offering appointments from midnight onwards, Kasapidis did not see the point. "We'll have enough work in the coming weeks," says Kasapedis, who has brought along some fruit for his staff to keep their energy levels up.

He expects to be in the shop 70 hours a week in the immediate future." I can't ask my staff to do that but I will be here from 8 am until 8 pm." It's important to look after the regulars. He has an online appointment service but not all the regulars are willing to use it." They get in touch by phone and I can't just tell them that there are no appointments left," he explains.

Kasapidis had two weeks to get his shop up to speed for the reopening. He says he welcomed the extra time to prepare compared to the first lockdown and reopening last spring. Back then, he and his colleagues were only told a few days before they were allowed to reopen. And some of the measures he introduced back then are still good to go. The salon is big enough to allow for proper distancing and the staff wear masks all the time. Kasapidis has merely added an extra pane of Plexiglas between the basins for hair-washing. "And we open the windows on a regular basis, " he adds. After four months, Anna is thrilled beyond words to be able to have her hair done again

Preparing for the onslaught

"Nikos Friseure" has always been by appointment only and that's helpful now, because and his employees have to keep close track of all their customers so that they can trace infections if necessary.

The appointment list filled up quickly, with nearly all slots taken. Within an hour, Kasapidis is on his third customer. His colleague, Anastasia, welcomes the first female customer of the day. Anna has been working in the Russian consulate for two years but hasn't mastered German yet. But that's not a problem for Kasapidis, either. Half Russian, half Greek, he does the simultaneous translation. Anna tells us that she hasn't been to the hairdressers since November. Asked whether she was looking forward to her appointment, Anna cries out and claps her hands.

"No need for a translation there," laughs Kasapidis.