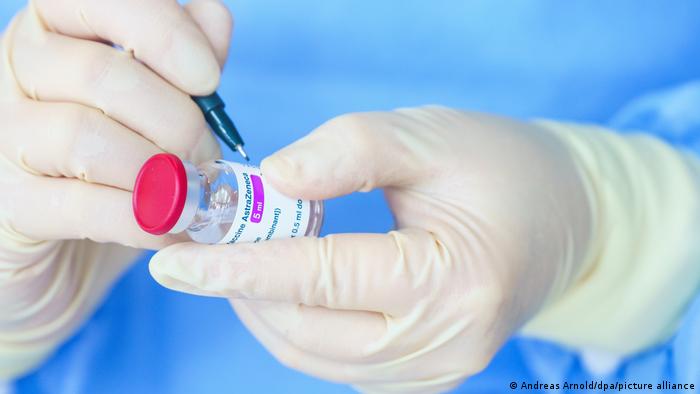 Germans have been hesitant to take the AstraZeneca vaccine

Ministers for the German states of Baden-Württemberg, Bavaria and Saxony on Sunday called for younger people to be given the Oxford-AstraZeneca coronavirus vaccine due to a lack of take-up in the first priority age group.

The comments came after the Health Ministry said this week that it has, so far,used only 15% of the AstraZeneca stock, partly due to the vaccine being approved for use in those under-65 years old.

The vaccine has been shunned by many Germans after media reports suggested it was less effective in older people, which the drugmaker denied.

Baden Württemberg state premier Winfried Kretschmann told the Welt am Sonntag newspaper, "The prioritization is a means of deficient management and should be abolished quickly."

"We cannot afford the vaccine sitting around and not being used because some of those entitled reject it," he added.

His Bavarian counterpart Markus Söder agreed, telling the Bild am Sonntag newspaper, "Before it is left lying around, vaccinate whoever wants it."

The vaccine rollout across the European Union has been very slow compared to some other nations.

While Germany had administered less than 6 million total vaccine doses by Friday, theUK gave its 20 millionth vaccine dose on Sunday. In Israel, more than half of all eligible adults have been given at least one shot.

Despite Germany saying that only people between 18 and 64 years old should receive the AstraZeneca vaccine, EU regulators have said it was safe for all adults.

Initial reports showed the vaccine was up to 90% effectiveagainst COVID-19.

Carsten Watzl, secretary-general for the German Society for Immunology, told British broadcaster BBC Sunday that German regulators are likely to revise their guidance on the AstraZeneca shot.

Watzl pointed to recent data from Scotland that suggested the elderly were also protected by the vaccine.

"If at that point (German Chancellor) Angela Merkel were to go on live television and have the vaccine, that would be great," said Watzl.

Thomas Mertens, chairman of Germany's Standing Committee on Vaccination (Stiko) told German public broadcaster ZDF on Friday that the body plans to reconsider its recommendations on the AstraZeneca vaccine.

He said the current age limits were due to a lack of data on the effect on older people and that Stiko had never criticized the vaccine.

Merkel, who is 66 years old, recently told the Frankfurter Allgemeine Zeitung that she was too old to get the AstraZeneca vaccine under current rules. But she said the public should be willing to get the shot, saying it is "a reliable vaccine, effective and safe."

The Oxford-AstraZeneca vaccine has been hit by several production issues over the last few months. The drugmaker said it would not be able to meet its target for vaccine distribution within the EU for the first half of 2021, much to the anger of Brussels.

The bloc had secured about 2 billion doses of vaccine from various companies, but only the Pfizer-BioNTech, Moderna, and AstraZeneca vaccines have been approved for use in the EU.

Some studies have also suggested that the vaccine provided only minimal protection against a variant that was first detected in South Africa. The African country then halted the use of the AstraZeneca vaccine in the country earlier this month.