They seemed very tired after yet another meeting to tackle the coronavirus pandemic. Once again, they addressed the cameras and thanked the citizens of Germany, cited numbers and pronounced many "if and whens" — it's becoming almost routine. And once again, there was no genuine passionate appeal. Chancellor Angela Merkel and her co-chairs, Bavarian state minister Markus Söder of the Christian Social Union (CSU) party and Berlin mayor Michael Müller of the Social Democrats (SPD), were exhausted after nine hours, and well over 20 crisis meetings over the past 12 months.

Much of what was announced was predictable. The so-called lockdown will be extended until March 28 at least. This is probably necessary even if it will bring further hardship to many businesses and people who are self-employed. However, the numbers are not yet so low that it would be wise to open up more, particularly as the more contagious variants are being detected more frequently. It was also predictable that the easing of measures would pertain to certain areas, such as outdoor eating, museums and — under certain restrictions — retail. Even the announcement of a target incidence rate of 35 was to be expected, to convey a sense of relief. Whether it made sense at this point remains to be seen.

But all of this misses the point: There are still not enough vaccinations happening. While the US president has announced that there will be enough doses there to vaccinate all adults by the end of May, in Germany — two and a half months after the immunization program was launched — only 5% of the population has been vaccinated. At least, most older people who are particularly at risk are now protected.

But it is surprising that a word such as "Impfstau" ("vaccination backlog") should exist so early on in this pandemic and that there is stockpiling going on. The problem lies in the basics.

For example, the pace at which vaccinations are taking place: The incidence rate will not fall only because of restrictions to daily life but also through vaccinations. There should be as many shots as possible, as fast as possible, 24/7. The German media and politicians celebrated the arrival of the first vaccine before Christmas. Then nothing happened for a long time. Now, it has been agreed to involve family doctors from April onwards. Merkel admitted that there was room for improvement. 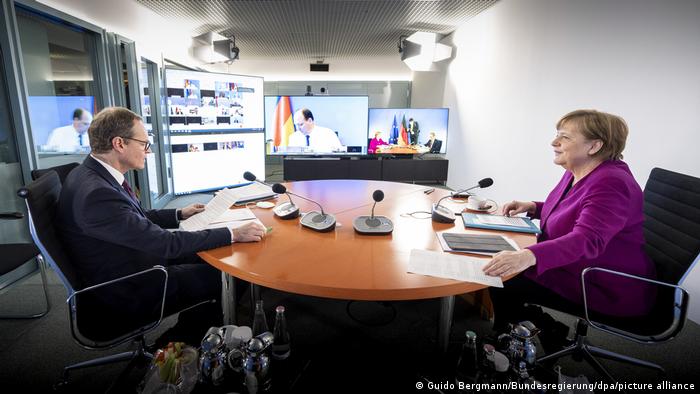 Another example is the vaccination strategy: Certain other countries have decided to extend the interval between the first and second shot of the vaccine. Those who have received the first shot could be protected for several months and thus allow others who are waiting to be vaccinated to at least receive the first shot. Experts who can be taken seriously say that up to 14,000 lives could possibly be saved. The chancellor and the state premiers agreed to use the pharmaceuticals' recommended interval "to the maximum."

Yet another example are rapid tests and self-tests, which are key to the gradual opening-up process. In February, Health Minister Jens Spahn announced a nationwide and free self-testing strategy from March 1. That did not happen. Now the hope is for March 8. Spahn had already announced rapid tests for all in mid-January. While the state has hesitated, Germany's major discount supermarket chains have now joined in and will reportedly be selling self-tests from the weekend.

The increasing hesitancy is just another example in a series of disappointing, inappropriate decisions. A prior example was working from home, which has been praised highly from the start, including by the chancellor herself. But only since the Corona Occupational Health and Safety Ordinance came into effect on January 27, 2021, have employers been forced to give employees the chance to work at home whenever possible. This may seem incidental, but millions of Germans had to continue going into the office for months. From the chancellor there were only pious appeals. Even today, there is no obligation to work from home when possible, though that would help to lower the rate of infection.

A year since the start of the coronavirus pandemic, it is clear that the German population is very capable of working things out in a crisis and putting them into perspective with "ifs and whens," but that is not what's most important at the moment. What matters is to "vaccinate, vaccinate and vaccinate" — as much as possible 24/7 — and to "test, test, test," so that we can prevent new clusters and explosions and achieve a semblance of normalcy.

But Germany's politicians, both at federal and state level, are no longer conveying the spirit needed to fight the pandemic. What's worse is that their actions are endangering what little remains of this spirit, particularly patience.

This is not what a new dawn looks like.

The chancellor reportedly told a closed-door meeting of conservative lawmakers that Germany is already in a "third wave," and warned against a hasty reopening.

Hurricane Ian: Biden and DeSantis put politics aside for Florida cleanup 52m ago