Animal rights activists were worried that pigeons would starve as the COVID-19 crisis saw high streets emptied, leaving no scraps to eat. Now the birds in Cologne will not go hungry. 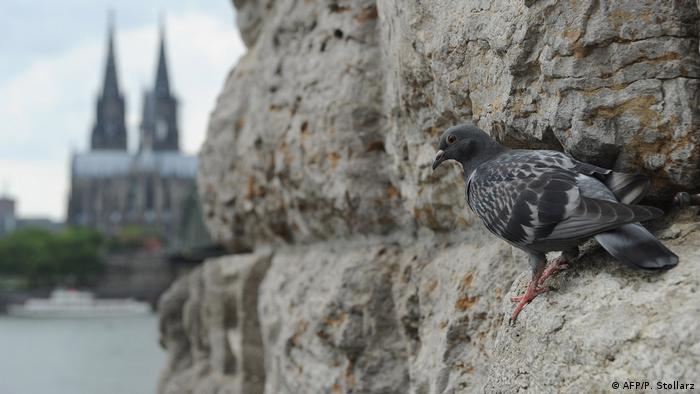 The city of Cologne, in western Germany, has issued special pigeon-feeding permits to 25 animal rights activists after they raised concerns that the birds could starve during the coronavirus lockdown.

The activists will now be allowed to feed the pigeons at designated "pigeon hotspots" around the city, including in front of its iconic cathedral.

Under normal circumstances, feeding pigeons is banned in Cologne. Breaking the rules carries a fine of up to €1,000 ($1,080). But in March, German animal rights charity, German Animal Welfare Association, raised concerns that pigeons were being adversely affected by the coronavirus restrictions. The birds usually feast on tiny leftovers dropped by residents leaving cafes and takeaways, but with these closed the birds were going hungry, said the charity.

The local environmental authority listened to concerns raised by the activists, agreeing that the birds must be fed.

"Weakened and starving pigeons" have repeatedly been spotted, a statement from the city authority said. In Germany, pigeons are classed as "feral domesticated pigeons," meaning that they are protected by animal welfare laws, the environment authority said.

The pigeons will be fed in designated zones "where an increased occurrence of city pigeons has been observed" said the authority.

Not everyone has welcomed the decision. City Mayor Andreas Hupke commented: "I do not think much of artificially sustaining a pigeon population that has multiplied from eating the scraps of food that people have carelessly thrown away."

However, permission to feed the pigeons will only last as long as the coronavirus restrictions remain in place, reported Cologne local newspaper Express.

Following Chancellor Angela Merkel's announcement that further coronavirus measures are set to be eased, pigeons may soon have to return to their old feeding habits: the opening of larger shops and the easing of other restrictions may see the return of footfall — and food scraps — in Cologne's city center.

Known as a symbol of love, peace and happiness, the turtle dove, sometimes knowns as a love bird, is flirting with extinction. A German environmental protection group has named it the 2020 bird of the year. (11.10.2019)

An angry crowd attacked two men suspected of killing a capercaillie, an endangered bird, in southern Germany. The men said the bird had threatened them and they merely defended themselves. (11.08.2019)

A German animal rights group is warning that pigeons are struggling to find enough food amid the coronavirus lockdown. Empty city centers mean no leftovers for them to feast on and thousands may die. (31.03.2020)