Known as a symbol of love, peace and happiness, the turtle dove, sometimes knowns as a love bird, is flirting with extinction. A German environmental protection group has named it the 2020 bird of the year. 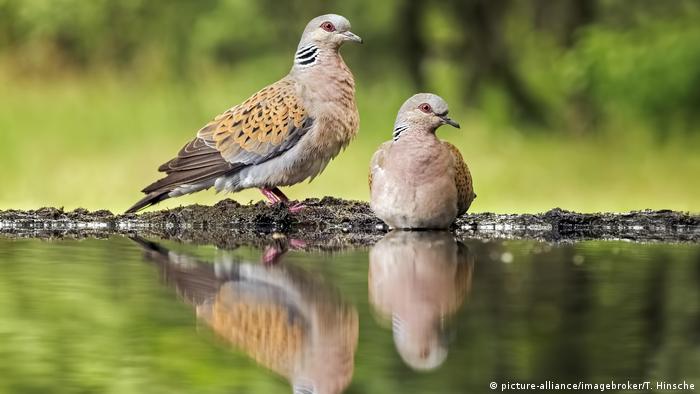 The European turtle dove's populations in Germany have declined by more than 90% since 1980, according to NABU, which has named the migratory species the 2020 bird of the year.

"Our smallest dove can barely survive due to loss of habitat. In addition, both legal and illegal hunting are threatening the species," NABU's Heinz Kowalski said.

The bird is not faring better in other parts of the world either. The turtle dove — known in German as "Turteltaube" ("flirting dove") has seen its natural habitats dwindling worldwide. In 2015, it was put on the Red List of globally endangered species of the International Union for Conservation of Nature.

Known as a symbol of love and fidelity because it can form strong and lasting bonds with a partner, the turtle dove is feeling the effects of intensive farming and loss of woodland throughout Europe.

The turtle dove, which is smaller and slighter in build than other doves and pigeons, typically lives at the edge of forests, in wooded areas near water or clearings. Its diet consists of wild herbs and seeds.

Hunting, particularly in southern European countries, has also contributed to the population decline killing roughly 2 million of the migratory birds species per year. The turtle dove is the only dove species to migrate to Africa in the winter.

In Germany, the bird can still be spotted in vineyards and former military training grounds that were left untouched to let nature reclaim its territory.

Bird populations plummet in the US and Canada

A new paper signals an ecological crisis, and humans are to blame. There are far fewer birds today than in the 1970s, thanks largely to habitat destruction. (20.09.2019)

Pigeons and doves often symbolize love, peace and reconciliation in art. But they're no longer welcome at Cologne Cathedral because of their destructive droppings. (11.04.2019)