Deniz Naki was born in Germany to a Kurdish family and has long been a critic of Turkish President Recep Tayyip Erdogan. More than 1,500 Kurdish fighters have died fighting Turkish forces in northern Syria. 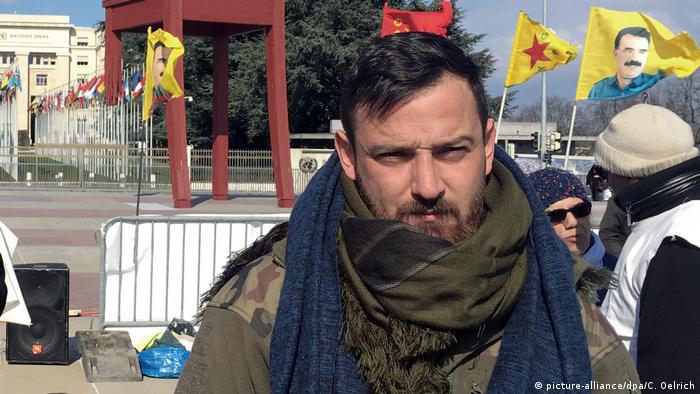 Deniz Naki on Wednesday in front of the UN in Geneva

Kurdish-German footballer Deniz Naki joined a hunger strike in front of the United Nations headquarters in the Swiss city of Geneva on Wednesday to demonstrate against Turkey's military offensive in Kurdish regions of Syria.

"We demand that the Turkish military and its Islamist allies withdraw from Afrin and end this war of aggression," German daily newspaper Die Welt quoted Naki as saying.

The 28-year-old, who was born to a Kurdish-Turkish family in Germany, previously played for the under-21 German national team and St. Pauli in the northern city of Hamburg.

Around 200 Kurds, including some Kurdish mayors from Turkey, also joined the hunger strike alongside Naki.

More than 1,500 Kurdish fighters belonging to the Kurdish People's Protection Units (YPG) have been killed since Ankara began a military intervention on January 20 into the majority-Kurdish region.

Turkey, which took control of Afrin city on Sunday, has said the offensive aims to uproot "terrorists" on the other side of its southern border.

Ankara claims that the YPG is an extension of the Kurdistan Workers' Party (PKK), a Turkish-based group that has waged a decades-long insurgency against Ankara.

German Chancellor Angela Merkel criticized Turkey's operation for the first time on Wednesday in a speech to the German parliament.

"Despite all justified security interests of Turkey, it's unacceptable what's happening in Afrin where thousands and thousands of civilians are being pursued, dying or have to flee," she said.

She added: "We also condemn this in the harshest manner."

Naki, who last played for Turkish team Amed SK, was banned for life from Turkey's football leagues in January. A Turkish court had earlier handed him a suspended 18-month prison sentence for spreading PKK propaganda. He has long been an outspoken critic of Turkish President Recep Tayyip Erdogan.

Also in January, an unidentified assailant shot at Naki's car while he was driving on a motorway in the western German state of North-Rhine Westphalia.