Is socialism the future for Germany′s ailing SPD? | Germany | News and in-depth reporting from Berlin and beyond | DW | 08.07.2019 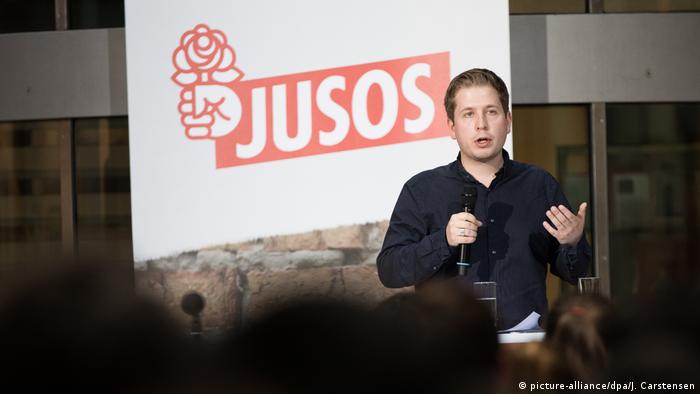 Silence falls over Munich's Alte Kongresshalle as Kevin Kühnert, the 29-year-old leader of the Young Socialists (Jusos), takes the stage to deliver his keynote address to hundreds of wide-eyed teens and young adults.

Sporting his trademark untucked shirt and sneakers, Kühnert opens by drawing parallels between today's Jusos congress and the one that took place in this very hall 50 years ago.

In 1969, at a time of civil unrest, his predecessors transformed an insignificant youth organization within the center-left Social Democrats (SPD) into an unapologetic socialist force that would help shape the party's political agenda for the next decade. It helped usher in an era of SPD dominance led by former Chancellors Willy Brandt and Helmut Schmidt — a period largely seen as the golden age of the SPD in Germany.

Past is now present, Kühnert stresses during the congress last Friday. Just like back then, the SPD finds itself in the throes of an identity crisis after a decade of electoral setbacks and rubbing shoulders with conservatives. The exact circumstances may be different, but he believes the path forward is very much the same: Democratic socialism and a return to grassroots politics.

"People like to accuse us of unrealistic, fantastic views — they say our heads are in the clouds," Kühnert says calmly of his critics. "They say we're radical."

He grows louder as he lists off the ills of Germany's current political establishment: Inhumane migration policies, the resurgence of right-wing extremism, ignored societal inequality.

"The circumstances in which we're living are radical!" he proclaims. The hall erupts in applause. One young man whistles as he throws his fist in the air in a show of solidarity.

Socialism on the rise?

Such scenes could lead one to believe that excitement for socialism is growing in Germany, especially among young people, many of whom have recently taken to the streets in protest against climate change, the far right and unaffordable housing.

Such assumptions wouldn't be far-fetched. The local, SPD-led government in Berlin recently instituted a five-year freeze on rent hikes to pacify unrest and address skyrocketing costs of living in the German capital. From Europe to the United States, there are examples of socialist thinking gaining traction — from the unlikely resonance of Bernie Sanders among many Americans, to the return of social-democratic parties to power in Portugal, Denmark and Spain.

But social democracy around the world is actually in an "existential crisis," according to Klaus Dörre, a sociologist at the University of Jena. Unable to answer pressing questions as far-ranging as digitalization and human rights, he says most of these parties focus on electability over substance.

The result is a social-democratic party in Denmark that shares views with the far right on immigration, a broad left coalition in Spain held together by a strong personality, and a lamenting SPD in Germany that's often criticized as unrecognizable from longtime German Chancellor Angela Merkel's Christian Democrats. The SPD has spent 10 of the past 14 years in a coalition with Merkel's conservative party.

The SPD won only 15.8% of the vote in May's European Parliament elections, is in the middle of its sixth leadership change since 2008 and is currently polling at an anemic 13% nationally, according to the latest figures from German public broadcaster ARD. 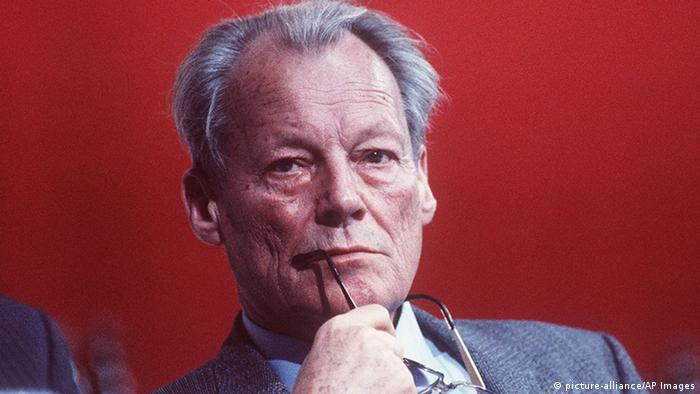 Former Chancellor Willy Brandt oversaw much of the Social Democrats' golden era in the 1970s.

It wasn't always like this, says Marianne, 85, at a recent barbecue hosted by the local SPD in the Berlin neighborhood of Schöneberg, a party stronghold.

Marianne fondly recalls the solidarity she felt among other SPD members in the late 1950s. When she joined her father in the western city of Solingen in 1953, after fleeing communist East Germany, she quickly internalized his priorities: God, career and the SPD.

"We came together for our fellow man, for the poor. We were completely socially minded," she explains, loading another cigarette into her long, black holder. "I felt a duty to stand up for fairness, to support workers and social equality."

Today's SPD is a shell of what it was in those glory days, she says. Under the leadership of former Chancellor Gerhard Schröder from 1998 until 2005, the SPD adopted a conservative course of strict requirements for welfare recipients and business-friendly policies that jaded its traditional base of workers and the unions that represented them.

Despite much effort, the SPD hasn't been able to shake off those policy choices. Subsequent leaders favored small, technocratic solutions, such as tweaks to Germany's pension scheme and its minimum wage, over broader, socialism-driven visions. They often capitulated to Merkel's conservatives in an era where Germany became Europe's wealthiest nation, and the vast majority of people report that their lives are going well.

Those at the helm of the SPD no longer listen to voters' concerns for the future, says Marianne. "Their heart's no longer in it. They're not even fighting anymore." 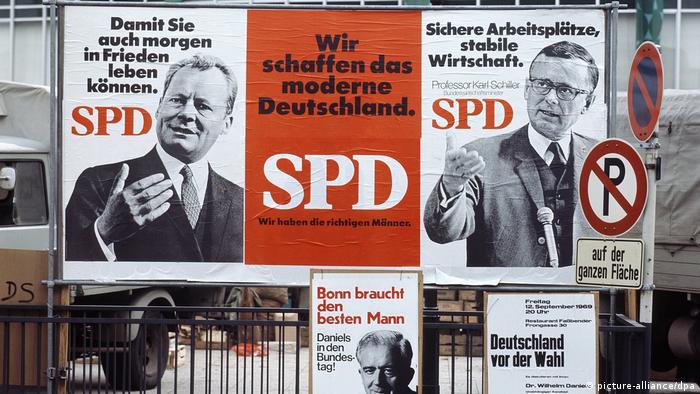 The SPD in the 1960s and 1970s remained close to their base of workers and unions.

But Michael Biel, chairman of the SPD in Schöneberg, is optimistic about the future of the party he's called home for the last 15 years.

Crisis can be a catalyst for the party to return to its roots, especially as industrial automization, an inevitable transition to renewable energies and a growing disparity between rich and poor make progressive thinking much appealing to voters.

"The SPD can no longer sit in closed rooms and talk about itself — we need to open the windows and develop something together that's good for our districts, our neighborhoods and our society," he says.

Airing out a room that's become too dusty is the thinking behind the current SPD leadership race. Following the untimely resignation of the party's former leader, Andrea Nahles, after the SPD's abysmal results in the European Parliament election, interim leaders announced an open casting call.

Candidates must apply as a male-female team, and anyone can throw their hat in the ring until September, at which time candidates will campaign around the country for member support before a final ballot is cast at a convention of party leaders in December. 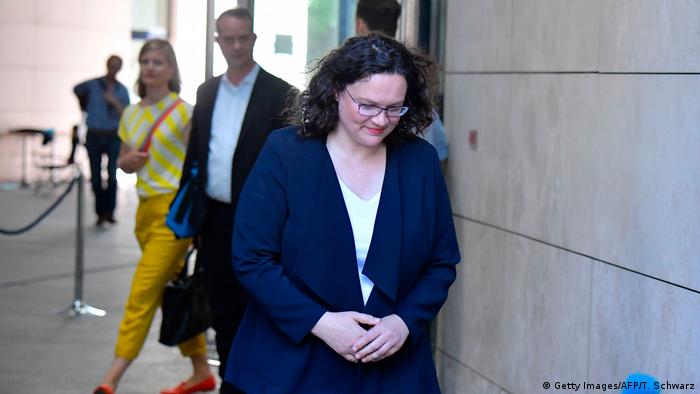 The search for the Social Democrats' next superstar, however, has been slow-going. Since the gates opened in the leadership race, only one duo — Christina Kampmann, 38, the former minister of family affairs in the state of North Rhine-Westphalia, and Michael Roth, a deputy minister in Germany's Foreign Office — have announced they're running.

There was also speculation of a run by Kühnert, with his posturing of expropriating large swaths of German housing stock and key German industries. But his unabashed calls for a socialist revival within the SPD would harm, not help, a party struggling to retain voters, says Gero Neugebauer, a political scientist at Berlin's Free University.

Indeed, he believes the party's next leader needs to be an outsider, someone with no connection to the SPD's unpopular coalition governments with Merkel, as well as someone who can drive the party to the left. As a figurehead, Kühnert has breathed a lot of life into discussions about the party finding a niche for itself in a new era of German politics, where both the environmentalist Greens and the far-right Alternative for Germany have gained momentum. 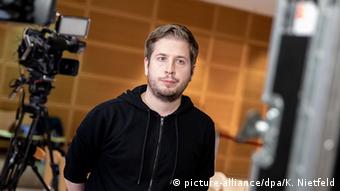 "But a figurehead can't steer a ship," Neugebauer says.

Only 28% of people responded positively to Kühnert's views on socialism, published in a much-discussed interview in German newspaper Die Zeit in May, according to a Civey survey conducted at the time. "He doesn't have the qualities a party leader needs to represent the majority of some 400,000 [SPD] members — even if about a fourth of those members are Jusos," says Neugebauer.

So the new-and-improved SPD needs to be socialist, but not radically so. And it needs to be led by an outsider courageous enough to speak out about the tricky issues Germany faces in the future, but someone who has enough experience to house new ideas within the golden palace of the SPD's traditional value set.

It's a tall order for a party on the brink of irrelevance, admits Carlo Hofacker. The 18-year-old recent high-school graduate traveled over six hours from Hamburg to Munich to attend the recent Jusos congress.

He expressed hope the weekend of intense discussions about the SPD's future would renew his faith in a party he believes is crucial for the health of German democracy, even if most see the Jusos' proposals as out of touch. He says there's no other party in the country he believes can step up to the plate to balance the needs of society with the challenges of the future.