In a vote that saw one of the highest turnouts in recent years, Spain's ruling Socialists have won the most seats but fell well short of a majority. The far-right Vox party will enter parliament for the first time.

Prime Minister Pedro Sanchez came out victorious in Spain's snap general election on Sunday, with his Socialist party PSOE winning nearly 30% of the vote. The tally was enough to put the Socialists on top, but far from a majority.

The conservative Popular Party (PP), meanwhile, faced devastating loses, shedding more than half of its seats in parliament.

Addressing a jubilant crowd of supporters in Madrid, Sanchez said his party would commit to his key campaign messages of working to end inequality, solving the political conflict with Catalonia and putting an end to corruption.

"We don't want to go backwards, we want a country that goes forward and looks to the future," he said.

But Sanchez also said his victory was critical for Europe, noting that Spain was a place where social democracy could win and where authoritarianism could be defeated.

Sanchez promised to lead his nation with a pro-European government, with the goal of strengthening Europe.

The conservative Popular Party came in second place with 16.7% of the votes, its worst showing since it first participated in Spain's national elections in 1989.

"I am not one to elude responsibilities, the results are very bad," Popular Party leader Pablo Casado told a somber crowd at his party's headquarters in Madrid.

Casado took the reins of the party last July after former Prime Minister Mariano Rajoy lost a no-confidence vote that saw the Socialist party rise to govern the country.

Since then, the young conservative has steered the PP further to the right in order to stop bleeding support to Vox. But the strategy appears to have backfired, as voters still fled to Vox and liberal party Ciudadanos, which rose from its last electoral result and nearly tied PP's share on Sunday.

Vox leader Santiago Abascal was once a member of PP, and left the party in 2014 to lead the far-right movement. On the campaign trail, he referred to his old party as "the cowardly right."

Late Sunday, Abascal celebrated his party's success. "We told you that we were going to begin a reconquering of Spain and that's what we have done," he said, in a reference to the 15th-century campaign by Spanish Catholic kingdoms to end Muslim rule in the Iberian Peninsula.

PSOE won 123 seats in the 350-seat parliament, while far-left Unidas Podemos registered 42. The two fell 11 seats short of forming a governing coalition together. Sanchez will have to search for support for smaller parties to make up the difference, including the Basque and Catalan nationalists.

Right-wing Ciudadanos, which came up right behind PP, has ruled out its participation in a socialist-led government.

Podemos leader Pablo Iglesias reiterated his call to be included in a government. "I have expressed to him [Sanchez]...our willingness to work toward a coalition government," Iglesias told supporters in Madrid after the vote.

He added that such a task "will take much time" and asked Podemos supporters to have patience.

Sanchez did not provide details about his coalition strategy, but he sent a message to those small parties that may be interested in joining his government.

"The only condition is to respect the constitution, move toward social justice, coexistence and political cleanliness," Sanchez said. 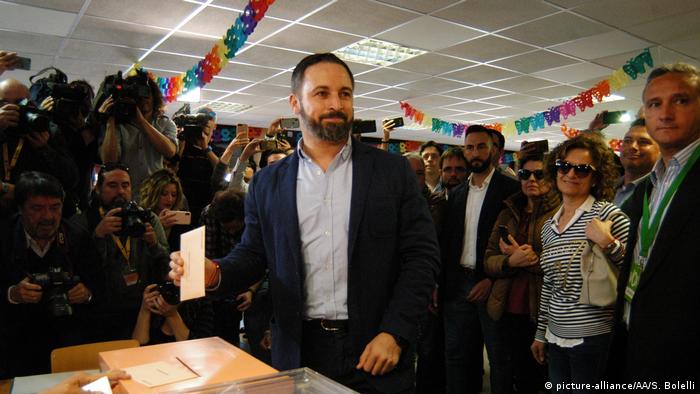 'Millions of Spaniards are going to vote with hope': Santiago Abascal, leader of the far-right Vox party

Despite it being the third election in four years, turnout in Sunday's vote was at around 75%, up more than eight points since the previous general election in 2016, according to the Interior Ministry.

Turnout was especially high in the Catalonia region, the scene of a secession attempt in 2017, rising nearly 18 percentage points to over 64%. Overall it was the highest electoral turnout in Spain since 2008.

All 350 seats of the Congress of Deputies, which appoints a government, and 208 seats in the upper house Senate were up for election by the 36.8 million voters.

A 5-year-old German boy led police to the bodies of his mother and brother, saying that his father attacked them in a cave on the island. Spain's prime minister has decried the act of "gender-based violence." (25.04.2019)