Social Democrats have taken the most seats in an election centered on issues of immigration, climate and welfare. Left-leaning parties did well, while support for the populist Danish People's Party plummeted. 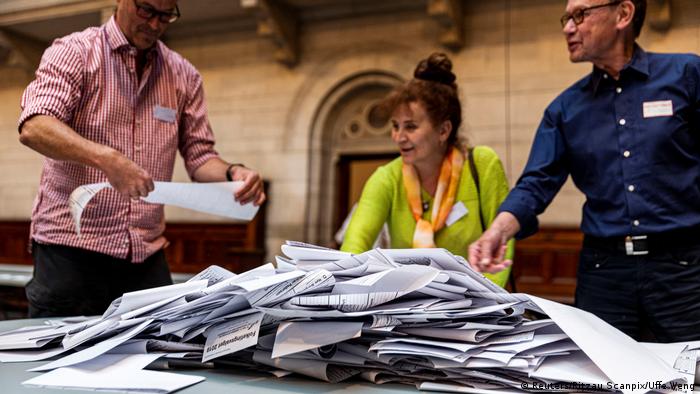 Denmark's Social Democrats won the largest share of the vote in the country's parliamentary election on Wednesday, with the preliminary results showing populists shedding support.

Prime Minister Lars Loekke Rasmussen of the Liberal Party conceded defeat to the center-left party led by Mette Frederiksen, which appeared to have gained support thanks to its adoption of a tougher stance on immigration.

Not just immigration: The Social Democrats also campaigned on bolstering efforts to fight climate change and increasing spending on welfare programs and healthcare after years of budget cuts under Prime Minister Rasmussen.

Far-right in flux: The results show that many supporters of Danish People's Party, which often voted with the center-right Liberals on immigration, shifted to the Social Democrats after they adopted tougher immigration policies. Danish People's Party leader Kristian Thulesen Dahl admitted the results were "really, really bad," but said he would continue to lead the party.

Extreme right: Parties focused on an anti-immigration platform had mixed results. The anti-Muslim Hard Line failed to make it over the 2% threshold to enter parliament, while The New Right won 2.3% to enter parliament for the first time.

Denmark has approved funding to transform a remote island from a contagious diseases laboratory into a detention center that would house migrant criminals who cannot be deported. The move was criticized by the UN. (20.12.2018)