Three journalists have allegedly been killed for reporting on corruption in the Indian states of Bihar and Madhya Pradesh. Their deaths underline dangers faced by journalists in the country. Murali Krishnan reports. 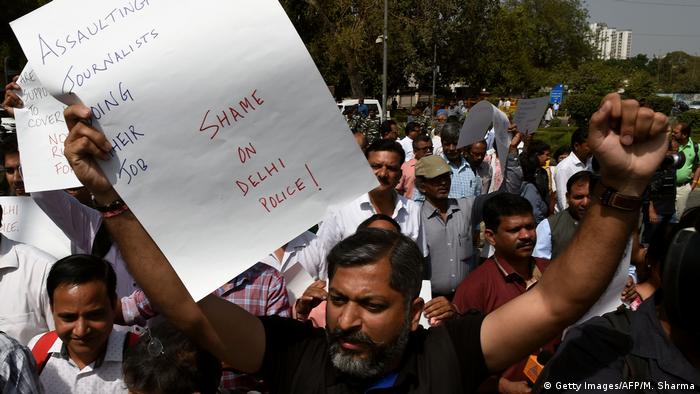 On Monday, Indian journalist Sandeep Sharma was crushed by a truck while riding a scooter in Bhind district in the central state of Madhya Pradesh. The same day in the Bhojpur district in the eastern Bihar state, journalist Navin Nishchal and his colleague Vijay Singh were the victims of a deadly hit-and-run.

Sharma, a 35-year-old stringer for the News World channel had received threats after conducting an investigative report in July last year that uncovered corruption in the sand mining industry. "Sand mafias" are alleged to be involved with illegal sand extraction in cooperation with corrupt police forces.

The incident was vividly caught on CCTV camera. In the video, the scooter simply vanishes under the wheels of a truck moving at breakneck speed. India's Central Bureau of Investigation has been tasked with investigating Sharma's death.

"The illegal mining mafia is too strong. This investigation will be biased. Journalists continue to bear the brunt of threats and violence from the mafia," Vivek Sharma, Sandeep's friend told DW.

Nishchal and Singh worked for the Hindi newspaper Dainik Bhaskar. Police arrested Mohammad Harsu, a former village chief in the eastern state of Bihar who according to the Associated Press had argued with Nischal earlier in the day about his reporting.

The deaths are the latest in a disturbing trend of journalists meeting a frightening end while performing their duties in speaking truth to power.

The frequency in which journalists are being attacked, especially in rural India, also begs the question of why there are no safety mechanisms to protect them.

"Authorities must thoroughly investigate the killing of the journalists and determine if they were targeted because of their reporting," Committee to Protect Journalists (CPJ) Asia program coordinator Steven Butler, told DW.

"This tragic incident may well be a failure of local authorities to provide adequate security to a reporter who had received death threats," he added.

The CPJ ranks India 13th in its global impunity index, which highlights countries where the murders of journalists are least likely to be punished. The organization claims not a single journalist's murder in the country has been solved in the past 10 years.

Small-town journalists at a greater risk

Since 2015, as many as 142 attacks against journalists have been registered in rural India, according to the latest data available with the National Crime Records Bureau. As many as 70 journalists were killed in India between 1992 and 2016. Many of them were independent journalists who were murdered close to their home or their workplace.

"Just look at the number of photographers who were roughed up, their equipment smashed and female writers groped by the police while covering students protesting in the capital last week," Rajeev Tyagi, a veteran photographer, told DW.

Many attacks on journalists go unreported, as reporters often succumb to threats from local politicians, policemen, and self-appointed vigilantes.

The gunning down of high-profile journalist Gauri Lankesh in Bangalore last September reignited the debate over freedom of the press and freedom of speech in India. It demonstrated that killing and intimidation of journalists was not limited to one regime or region.

But despite public outrage, nothing has changed since then.

Read more: Indian journalists work in an 'atmosphere of intimidation'

Soon after Lankesh's murder, journalist Sajeev Gopalan was allegedly roughed up by police in front of his wife and daughter in the southern state of Kerala after he had reported unfavorably about them.

In another incident, Sudip Dutta Bhaumik, an investigative reporter at the Bengali-language daily Syandan Patrika, was shot dead in the northeastern state of Tripura. Another young TV reporter, Santanu Bhowmik, known for leftist leanings, was allegedly killed in an attack by tribal party cadres.

"All of them angered fanatical forces who have powerful backers and paid the price for speaking the truth. There has to be greater political commitment to protect free speech and freedom of the press," Brinda Karat, a Communist politician, told DW.

The central Indian state of Chhattisgarh, hit by a Maoist insurgency, and conflict-prone Kashmir especially have become dangerous places for those who question the government.

Last year, Somaru Nag and Santosh Yadav, both journalists who work for local newspapers were booked for sedition because police alleged that they worked as couriers for Maoists and published stories in their favor. Yadav had to spend 18 months in jail before he was released.

Journalists are routinely targeted like in the case of Kamran Yusuf, a photojournalist from Kashmir, who was released on bail this month after spending more than six months in jail on charges of "waging war against India" and "stone throwing."

The International Federation of Journalists in a recent statement said journalists covering Kashmir have "walked the razor's edge," working under threats and intimidation from various actors in the conflict.

"It is not easy being an impartial reporter and working in hot spots around the country. One can get caught in this dirty cesspool where varied interests are at play. It is tough," S K Pandey, president of the Delhi Union of Journalists, told DW.

Besides journalists, people who use potent transparency laws to expose corruption have been targeted. More than 15 whistle-blowers have been murdered and countless others attacked in the past three years.

This has brought into sharp focus the obstacles hindering the successful implementation of India's landmark Right to Information Act, which is supposed to expose corruption in the government.

"The government has not implemented the Whistleblowers Protection Act. Instead Parliament's approval is being sought to dilute its enforcement," Venkatesh Nayak from Commonwealth Human Rights Initiative told DW.

"The need of the hour is to implement the law as enacted by parliament in February 2014 and set up systems that will enable journalists, RTI activists and anti-corruption crusaders to expose wrongdoing in government without fear," added Nayak.

In India, questioning authority is clearly extracting a price. Death may have become a consequence journalists, writers, and whistleblowers will now face for challenging powerful vested interests or for expressing dissent.

India shocked at journalist's murder on military base

Pakistani cartoonist Feica: 'I don't care if my drawings offend'