Indian journalist and media trainer Shubhranshu Choudhary has introduced a novel project, which allows people of the insurgency-marred Indian state of Chhattisgarh to use mobile phones to relay their own news. 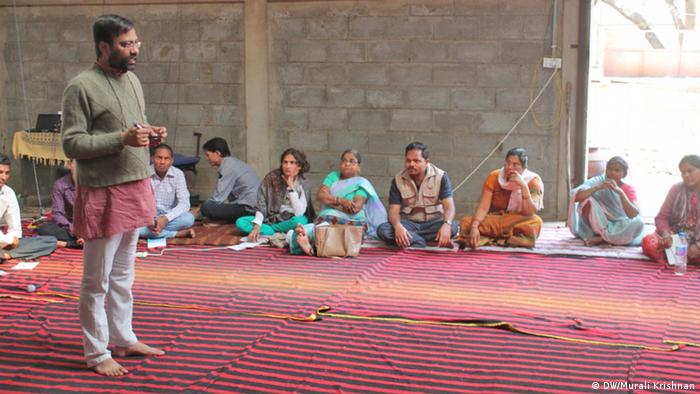 Shubhranshu Choudhary recently won a prestigious award from the Index on Censorship, a London-based organization campaigning for the freedom of expression. The award "recognizes the bravest journalists, artists, campaigners and digital innovators from around the world." Choudhary beat other finalists like American whistleblower Edward Snowden and China's uncensored social network, Free Weibo. Choudhary worked as a South Asia producer for the BBC for more than 10 years. He has also served as a media trainer for the BBC World Service Trust, the United Nations, and several Indian universities.

DW: What does this award mean for you?

Shubhranshu Choudhary: It is a very humbling experience, especially to be mentioned in the same breath as the other finalists. Just like politics and religion, journalism also affects our lives and influences our decisions. But if you look at the mass communication, it remains aristocratic. If we want true democracy, we cannot leave journalism in the hands of a few people. Journalism has to become everyone's business.

Two dozen journalists working for US media outlets in China are waiting for authorities to renew their residence and work permits. But should Beijing fail to do so, the first of them will have to leave the country soon. (11.12.2013)

Afghan journalist Najiba Ayubi is concerned about the future of independent media in Afghanistan. Recipient of the 2013 Courage in Journalism Award, Ayubi has been relentlessly fighting for a free press in her country. (25.10.2013)

Do you think the indigenous people in Chhattisgarh - a state which has been an epicenter of the Maoist insurgency - have found their voice through your 'CGNet Swara' project?

CGNet receives an average of 500 calls a day. But we want to scale it up. In this democratic radio, the shows are not created in studios or newsrooms but in villages and towns, where common people act as reporters. We only improve the quality of their reports. An interactive voice recorder system on our computers records people's messages and songs. The people can hear the same messages on their mobiles once they are crosschecked and moderated by some volunteers, which are also from the community.

Are the voices of India's indigenous population being heard in the mainstream media?

No. I'll give you an example. The majority of local people who live in the remote areas of Chhattisgarh do not want their forests and hills to be mined, but their demands never find much space in the mainstream media. Our project, which started four years ago, has caught the attention of these people. But we need help to reproduce this project on shortwave radio to create a sustainable and independent communication model owned by the people.

Will this award motivate you to take your work forward?

Many people are now using the system to create awareness about local issues. Reports on illegal mining, corruption in the government's welfare schemes, and atrocities committed by state authorities are being aired and discussed among the public. Today, the same people who had no voice before are picking up their mobile phones and are telling their stories in their own language. This definitely motivates us.