Afghan journalist Najiba Ayubi is concerned about the future of independent media in Afghanistan. Recipient of the 2013 Courage in Journalism Award, Ayubi has been relentlessly fighting for a free press in her country. 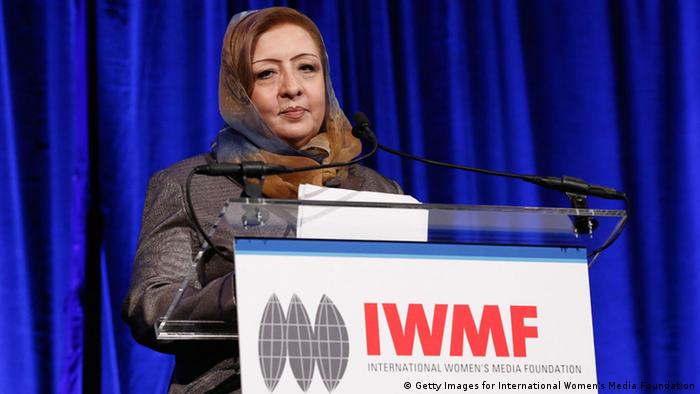 Najiba Ayubi is an Afghan journalist and media activist. The 45-year-old is the director of Radio Killid in Kabul and has recently received the 2013 Courage in Journalism award by the International Women's Media Foundation (IWMF). For more than two decades, Ayubi has been a leading independent voice in Afghan media. She has received death threats from both politicians and terrorists for her critical reporting. In an interview with DW, Ayubi talks about the Afghan media under the Taliban rule, and what keeps her going as a journalist and activist.

DW: You and two other female journalists from Syria and Cambodia received this prize. What does this award mean for you personally and for journalists in Afghanistan?

Najiba Ayubi: The award is important for all Afghan journalists. In my ten years of journalistic activism, I have faced a lot of difficulties. Being a woman journalist in a male-dominated society makes things even more challenging. My colleagues and I continuously receive direct and indirect threats, and we have to deal with many problems at the workplace. This award has made me and other Afghan journalists happy, and it will encourage us to continue our work.

What were working conditions like for female journalists under the Taliban? Do you see a change today?

Things have definitely improved. The Taliban did not allow women to work as journalists. Today we have around 1500 women working in several media organizations in the country. But we still have a long way to go.

You have received threats to your life a number of times. Conservative groups, who are against women's public role want to silence you. Do these threats intimidate you?

I remember every threat. The most terrifying experience was when two gunmen barged into our house and my family and I didn't know how to defend ourselves. It was a very difficult moment and I can never forget the look on my mother's face. Her face turned pale and she was very scared. I have experienced many incidents like this one but I am fearless.

What gives you the courage to keep on fighting?

Journalism is my life and I can't live without it. This is something I have chosen for myself, and I will continue to work more relentlessly than ever.

You are the director of the The Killid Group, which is the largest independent media company in Afghanistan. How do you manage to get funds for your programs?

We are a non-profit organization, which is a part of an NGO called the Development Humanitarian Services for Afghanistan (DHSA). The DHSA was established in 1992 and The Killid Group, as part of the DHSA started working in 2002-2003. In the beginning, the group was funded by the USAID and the European Union, and our radio station in Kabul was technically supported by the Internews. We have been financially independent since 2005 though.

We started seven radio stations with our own money. We continued like this until 2011. But then NATO announced it would leave Afghanistan in 2014, which resulted in the closure of a number of NGOs in the country. We realized that our income was not enough to pay our 300 journalists, so we have re-started raising funds. A big part of our income comes from advertisements now.

Do you fear that independent media organizations will suffer in the aftermath of the drawdown of the international forces in Afghanistan?

We have always been worried. The Afghan government has no strategy to support free media. I am not concerned about our own group; we have a good marketing plan and a very good strategy to generate funds. I am hopeful that we continue to work like this even after 2014. ´However, I can't say the same things for other independent media groups.

More enrollment in Malala's part of the world

Malala Yousafzai has not won the Nobel Peace Prize. Nonetheless, a number of people attribute the hike in girls' enrollment in schools in Pakistan's Khyber Pakhtunkhwa province to her struggle. (11.10.2013)