Indian media facing a crisis of credibility | Asia| An in-depth look at news from across the continent | DW | 05.06.2017

Journalism in India is facing a serious crisis. The mainstream media is increasingly vested in the hands of a select few and refuses to question authority. Murali Krishnan from New Delhi examines this disturbing trend. 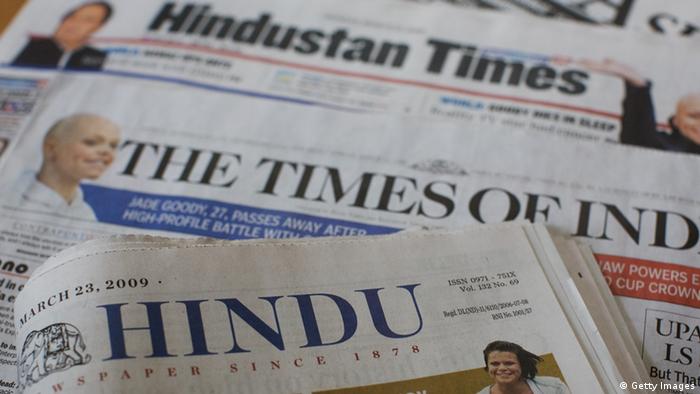 Just recently Indian President Pranab Mukherjee resoundingly drove home the point to the Indian media that "discussion and dissension" are crucial for a vibrant democracy, and it must hold public institutions accountable for all their actions and inactions.

"There should always be room for the argumentative Indian, and not the intolerant Indian. The media must be the watchdog, the mediator between the leaders and the public," Mukherjee emphasized while delivering a seminal lecture honoring former press baron Ramnath Goenka.

His words could not have been timelier, with the mainstream media's independence currently being questioned, and how ultra nationalism has dominated the political narrative, refusing to accept dissent.

Commentators criticize how in recent years the media has lowered the quality of India's public discourse. Media expansion has led to a shrinking of the public sphere, resulting in the spread of elitist and socially conservative values.

Indian police have raided properties belonging to Prannoy Roy, the founder of the popular NDTV channel, on suspicion of bank fraud. NDTV slammed the move as a "witch hunt" and retribution for criticizing the government. (05.06.2017)

Protests have erupted in many places against the Indian government's ban on sale of cattle for slaughter. Many say the new order violates the basic right of people to choose what they eat. Murali Krishnan reports. (31.05.2017)

India’s biggest student protests in 25 years have spread to 18 campuses. Hindu nationalists are calling everyone else traitors, and this may just be the beginning of bad days to come, writes Shivam Vij. (16.02.2016)

While the mainstream Indian media continues to ignore the issues concerning low-caste groups and other marginalized communities, some Dalit journalists are brining out their own magazines to highlight their problems. (01.09.2016)

"The true test of a robust democracy is the independence of its media. Over the past few years our media has become the mouthpiece of the party in power. Coupled with the fact the corporate owners of media houses share close links with the government, the Indian media has tragically lost its voice," criminal lawyer Rebecca Mammen told DW. Mammen has defended many cases related to press freedom.

Serious issues like the beef ban, the crisis in Kashmir, dissent in universities and even the unrest in societies where Dalits - the lowest level of India's caste system - have been discriminated or killed, have received scant mention in media coverage.

Still, there hasn't been a bigger debate about why the media has failed to effectively perform the critical tasks it's supposed to do in a representative democracy.

India has over 400 news channels in various languages and another 150 channels are awaiting clearance. The South Asian country also has tens of thousands of news papers and magazines. But the quality of Indian journalism is poor, as evidenced by the fact India ranks 136 among 180 countries in the index compiled by Reporters Without Borders, an NGO.

When it comes to press freedom, India fares worse than even countries like Afghanistan and the United Arab Emirates.

"Over the last few years - especially after Prime Minister Narendra Modi won the general election of 2014 - the Indian mainstream media has allowed itself to be undermined by the transcendent political power that he represents,"Pamela Philipose, an ombudsman for The Wire, a media outlet, told DW.

In fact, given the current state of how the mainstream media works it will be difficult to expose tweaked data and opacity in government functioning.

"A new note of muscular nationalism has crept into media discourse.  Also conspicuous is the curbing of dissent and the rise of the surveillance state - developments that bode ill for the independence of the Indian media," says Philipose.

Giles Vernier, a political scientist, has a different take.

"One reason why we don't see much criticism in the media is that the government, in the person of the Prime Minister, has the ability to completely dominate the media's agenda, by saturating the public and media sphere with the message, image, and his voice."

"Thus the media is bound to only react to the news agenda offered by the government, rather than investigate its action independently," Vernier told DW.

Filings with the registrar of companies in the ministry of corporate affairs have revealed that five Indian news media companies - NDTV, News Nation, India TV, News24 and Network18 - are indebted to either Mukesh Ambani, the richest Indian and the owner of Reliance Industries, or Mahendra Nahata, an industrialist and Ambani associate, who is also on the board of Reliance's new telecom venture, Reliance Jio.

"What more do you expect when the media industry is dominated by such big players? The Indian media is now the B team of the Bharatiya Janata party and the Modi government," says Mammen. 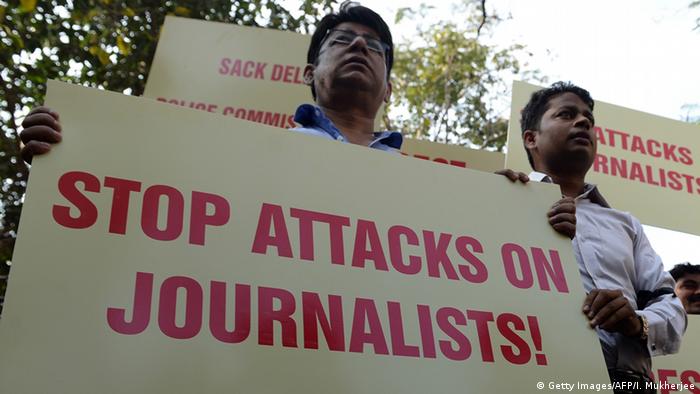 At least 54 journalists were attacked in India between January 2016 and April 2017, according to a report published by The Hoot

According to a report published by The Hoot, a website that tracks media, at least 54 journalists were attacked between January 2016 and April 2017.

Sevanti Ninan, who runs the site, says many attacks on journalists go unreported, as reporters often succumb to threats from local politicians, policemen, and self-appointed vigilantes.

In 2014 alone, 114 journalists were reportedly attacked, but only 32 attackers were arrested or prosecuted.

Celebrity anchor and journalist Rajdeep Sardesai sees the decline and concurs that the media views the actions of citizens through the lens of nationalism, condemning those who question the state narrative as "anti-national."

"I think there is a credibility crisis, in that television news media in particular is driven by a tendency to put sensation above sense in the search for ratings," Sardesai told DW.

But he was quick to point out that there is also unwillingness across the media to robustly challenge the official narrative on key issues partly out of its own failings but also largely out of fear of being denied access to those in power.

Debates on private news channels have been censured for being strident and shrill. India has one of the world's most vibrant and competitive media environments. It is now time to conduct a reality check and ask whether all is well with it.