Indian PM Modi to meet German Chancellor Merkel in Berlin | Asia | An in-depth look at news from across the continent | DW | 20.04.2018

The meeting between Modi and Merkel is expected to focus on ways to boost economic cooperation between the two countries. Post Brexit, India's reliance on Germany and France has been increasing, say experts. 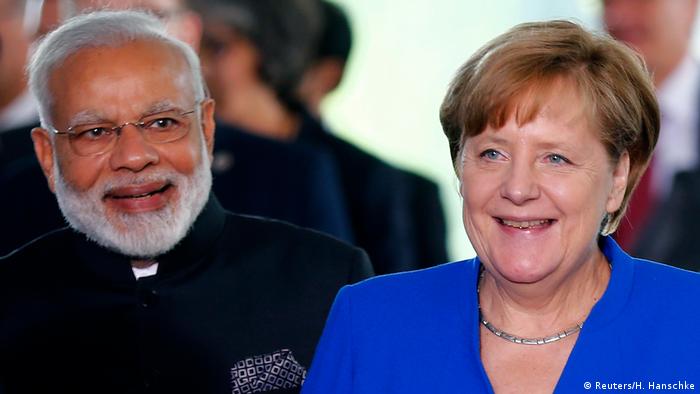 Indian PM Narendra Modi is meeting German Chancellor Angela Merkel during a stopover in Berlin on Friday, April 20, after concluding his visits to Sweden and the United Kingdom.

It will be the first meeting between the two leaders since Merkel began her fourth term as German chancellor last month.

The Indian premier's meeting with Merkel comes after German President Frank-Walter Steinmeier's trip to India last month, which focused on boosting economic and strategic ties between the two countries. Germany is India's largest trade partner in the European Union bloc.

G. Parthasarathy, a former diplomat, said Germany and France are expected to play a bigger economic role within the EU after the Brexit process is completed. "The reality is that India has to rely more on Germany if it wants to continue with its economic progress. The smaller European countries do not matter much," Parthasarathy told DW.

Rajendra Jain, a professor at the Center for European Studies in New Delhi, said Germany is pivotal to PM Modi's foreign policy because of its economic and political clout in the world.

Economic cooperation between India and Germany has been on the upswing. In 2016-17, the bilateral trade turnover was $18.76 billion (€15.3), with India exporting goods worth $7.18 billion to Germany and importing German products worth $11.58 billion.

According to a study conducted by Bertelsmann Foundation, the Confederation of Indian Industry and Ernst and Young, some 80 Indian companies in Germany generated combined revenues of $14 billion in 2016.

Since 2010, Indian companies have started around 140 major investment projects in Germany. On the other hand, Germany has invested in Indian transportation, electrical equipment, metallurgical industries, services sectors, chemicals, construction activity, trading and automobiles. German auto industry giants such as Volkswagen, BMW and Audi have also entered the Indian market and established major manufacturing plants in the South Asian country.

Germany has also invested in the National Mission for Clean Ganga. In 2016, the German government committed €3 million for data management and capacity building to clean up the Ganges, India's longest river.

Foreign investment is crucial for Modi's “Make in India” campaign, which aims to transform the country into a manufacturing hub. The project forms a key pillar of the government's efforts to create jobs for the millions of young Indians flooding the labor market every year. Employment generation is central to fulfill Modi's campaign promises of economic development and meet the demands of India's aspiring society.

At a press conference, the leaders of Germany and India have said that the countries' relationship is of "international significance." But ongoing talks are emphasizing how best to beef up business ties. (30.05.2017)

India is probably the only place where the principles of biodynamic farming, which began in Germany over 90 years ago, and has its share of adherents and skeptics worldwide, are culturally accepted without questioning. (23.11.2017)

Although diplomatic relations between Germany and independent India were established in 1951, links between their two peoples can be traced back centuries, says Joachim Oesterheld, a German Indologist. (15.08.2017)