Will Modi's Germany trip give thrust to free trade?

Indian PM Narendra Modi has been welcomed in Berlin ahead of talks with Chancellor Merkel. Modi said the visit would "open a new chapter" in the countries' strategic partnership. 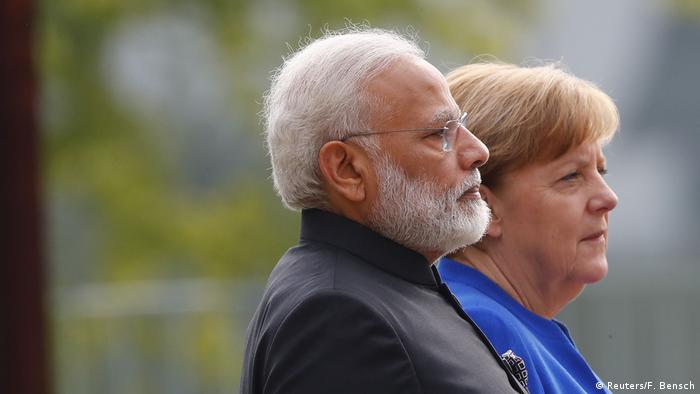 For his two-day sojourn in Germany, Modi is accompanied by a number of his cabinet ministers as well as business representatives. Germany is the largest trading partner for India in the EU, with bilateral trade valued at nearly $20 billion (18 billion euros.)

Trade and investment are likely to be the main subject of their conversation.

Other topics that could come up in their meeting include cooperation in the defense sector, counterterrorism, and promoting each other's languages.

Months after India's PM Narendra Modi shocked the nation with an abrupt high-value banknote ban, hitting the country's economic growth, the government has announced a plethora of sops to ease the pain. (01.02.2017)

The Indian government is striving to push through a long-pending legislation to streamline the nation's cumbersome tax system. If the move succeeds, it would make India a single unified market for the first time. (20.07.2016)

With growing concerns over the impact of air pollution on India's 1.2 billion people, the government has launched a new air quality index. But as Vandana Shiva tells DW, simply monitoring pollution won't solve the issue. (08.04.2015)

Earlier this year, India's prime minister announced the purchase of 36 Rafale fighter jets from France. The air force says it needs 108 such planes, but this demand does not fit in with Modi's "Make in India" plans. (07.10.2015)

"We have exchange programs for teachers, under which German teachers have come to India and trained Indian teachers on how to instruct the German language. Now, we will also send Indian teachers to Germany to train Germans on how to teach the Hindi language," said Javadekar. "We have decided to promote each other's languages in our countries. We have many other initiatives."

After their talks, Modi and Merkel are scheduled to address a gathering of prominent business executives from both countries later in the day. The Indian prime minister is also due to meet with German President Frank-Steinmeier mid-afteroon.

The event gives an opportunity for Premier Modi to brandish his credentials as an economic reformer and dangle in front of the CEOs the benefits of investing in a fast-expanding economy like India.

Germany is India's most important trading partner in Europe, with the overall exchange of goods and services between the two valued at 17.42 billion euros ($19.4 billion) in 2016. About 1,800 German firms are currently active on the Indian market. The economic potential of the South Asian nation is a major factor piquing the interest of an increasing number of German companies and driving them to invest there.

India's annual economic output is growing by around 6-7 percent, at a far more rapid pace than the more highly developed economies in Europe and North America.

The Modi government has also been able to push through some long-awaited reforms, such as overhauling the nation's arcane tax code to introduce a national sales tax, which would replace more than a dozen types of federal and state taxes. The measure is expected to improve ease of doing business on the Indian market and boost growth.

When addressing German business tycoons, Modi is certain to extol his government's achievements on the economic front and appeal to them to make India one of their top investment destinations.

Foreign investment is crucial for Modi's "Make in India" campaign, which aims to transform the country into a manufacturing hub. The project forms a key pillar of the government's efforts to create jobs for the millions of young Indians flooding the labor market every year. Employment generation is central to fulfill Modi's campaign promises of economic development and meet the demands of India's aspiring society.

German businesses say they're optimistic about the general business climate in India. But they point to a raft of problems that diminish their enthusiasm to pump more investment into the country. These include excessive red tape, corruption and a lack of quality physical infrastructure as well as skilled labor. Furthermore, German firms stress that they need a more reliable legal and administrative framework to operate in India.

Another issue that will also feature in talks between Merkel and Modi is the India-European Union free trade deal. Negotiations over the agreement - officially known as the Bilateral Trade Investment Agreement (BTIA) - began as early as 2007 but have yet to conclude.

A wide gulf divides both sides' positions on the various provisions in the proposed pact, thus making any progress an extremely painstaking affair. The negotiations finally came to a standstill in 2013. But Chancellor Merkel is expected to try to persuade Modi to firmly stand behind the deal and send a signal to the rest of the world that India is for free trade.

India and the EU should "make it a point to speak up for free trade and look for a free trade agreement," Germany's ambassador to India, Martin Ney, said recently at a press conference in New Delhi. The diplomat said it was particularly important against the backdrop of growing calls for protectionist measures and trade barriers across the world.

Despite trade-related disagreements, cooperation between the two countries has remained close, with Germany supporting India in carrying through some of Modi's pet projects, such as "Smart Cities" and "Clean Ganges."

German officials say that Berlin is committed to financing long-term strategic projects in India - like the building and expanding of roads, railways, ports and power stations across the vast nation - to support its development.

Anandi Iyer, head of the Fraunhofer Institute in India, says that besides smart cities, another potential area where there could be deep cooperation between the two sides relates to smart manufacturing - also known as Industry 4.0 in Germany. "This is an area that brings the mutual advantages of Germany and India to the fore," Iyer told DW.

India has rich software capabilities whereas Germany is extremely strong in engineering skills, and a combination of these two can generate very exciting opportunities for the two countries, she pointed out.

"But one must keep in mind that both of these are strategic initiatives and they call for a very focused and sustained interaction in order to make the best of the situation," Iyer added.

Both countries' governments and industry "need to engage very constructively to make sure that these trends are not lost and that we can leverage the capabilities of the two sides to bring to the table what we believe is a mutually rewarding relationship."

"Make in India" - Can the Country Keeps its Promises?

Make in India: Can the country keep its promises?