With growing concerns over the impact of air pollution on India's 1.2 billion people, the government has launched a new air quality index. But as Vandana Shiva tells DW, simply monitoring pollution won't solve the issue. 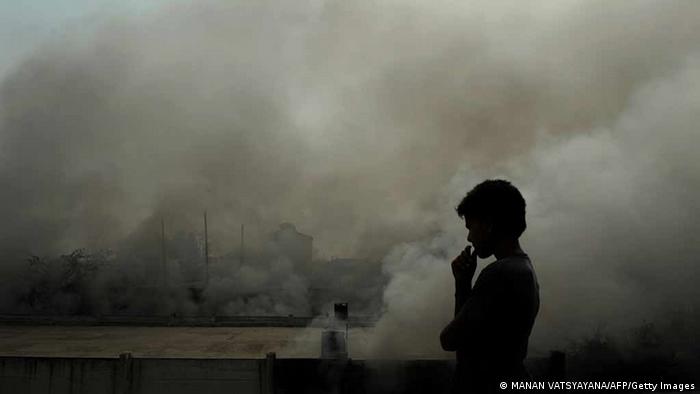 PM Modi then suggested that the country's "age-old traditions" could be used to ease smog, making every Sunday "bicycle day" and switching off street lights during a full moon. However, the government said little about what it was planning to do to improve air quality.

Meanwhile, New Delhi is under increasing pressure to act. Estimates from the World Health Organization (WHO) last year showed that 13 of the 20 most polluted cities in the world were in India, including the worst-ranked city, Delhi. Moreover, the South Asian nation has the highest rate of death caused by chronic respiratory diseases anywhere in the world.

A recent study conducted by economists at the universities of Chicago, Harvard and Yale, found that over half of India's population - around 660 million people - live in areas where fine particulate matter pollution is above the country's standards for what is considered safe.

In a DW interview, Indian author and environmentalist Dr Vandana Shiva explains why the government has not taken the necessary measures to tackle the issue and warns that New Delhi's campaign to attract foreign companies to manufacture in India, known as "Make in India," could make things even worse. 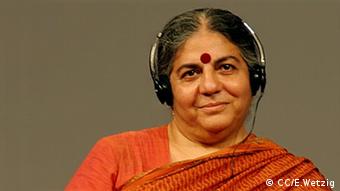 Shiva: 'The people of India are paying with their health for the deteriorating air quality in our cities'

DW: How will this new index help India overcome its air pollution challenges?

Dr. Vandana Shiva: The air quality index will let us know how bad air pollution levels are. It is the equivalent of using a thermometer to take the temperature of someone who has fever, to know how high the fever is.

The thermometer does not provide the diagnosis of the cause for fever, not the medicine to bring it down. The air quality index by itself will not bring down pollution. For that other policy steps are needed.

How are the Indian people affected by the deterioration of air quality?

The people of India are paying with their health for the deteriorating air quality in our cities. Delhi, the capital, has been identified as the most polluted city in the world by the WHO. In 2011, the fine particulate matter pollution was ten times the maximum limit, largely due to vehicular emissions (67 percent) and coal-based thermal power plants (12 percent).

There was a rising trend from 1989 to 1997 as monitored by the Central Pollution Control Board (CPCB). The concentrations of carbon monoxide from vehicular emissions in 1996 showed an increase of 92 percent over the values observed in 1989, consequent upon the increase in vehicular population.

Air pollution levels in Delhi decreased by 16 percent between 2002 and 2007 due to the Supreme Court of India's ruling that all public transport in the capital shift from diesel to compressed natural gas (CNG). However, these gains were undone with increase of 97 percent in vehicles from 2002 to 2012.

How dire is the air pollution situation in Delhi?

Delhi has about 7.5 million vehicles and is adding 1,400 vehicles a day. This is mobility for the upper, middle class, at the cost of the less privileged members of society and environment and health.

At the same time, public transport has come down, with bus riders dropping from 60 percent to 40 percent. While walking and cycling still account for nearly 40 percent of all trips, there is no safe place for pedestrians and cyclists in a city obsessed with cars, flyovers and highways. Every hour, someone is being killed or injured on Delhi's roads. 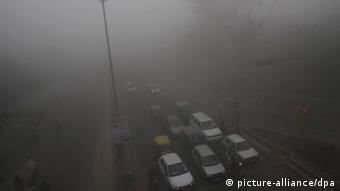 Delhi's growing use of cars is 'mobility for the upper, middle class, at the cost of the less privileged members of society and environment and health'

About a third of Delhi residents have one or more symptoms of respiratory diseases. For instance, lung function is impaired in 40 percent of residents and 43 percent of school children.

11 percent have asthma, and rates of emergency hospitalization for pollution-related diseases have increased by 25 percent. Children and the elderly are the most vulnerable.

What is the Indian government doing to tackle this issue?

While the government has announced the air quality monitoring index, it has not announced any policy to control pollution. In fact, policies such as self-regulation by polluters, the land acquisition policy, and more market and business-friendly policies all have the potential of increasing pollution risks.

Transport is an important aspect. But no public transport policy announcement has been made since the WHO released its data on Delhi being the world capital of pollution.

More than 100 corpses have been recovered from India's Ganges River. While officials have ordered a probe, environmentalists urge the government to urgently tackle the issue of pollution in India's most sacred river. (16.01.2015)

There is also no policy for regulating the number of automobiles that are daily introduced. A small commitment has been made on solar energy, but much is needed to shift from fossil fuels to renewables and from individual cars to shared mobility.

What impact could the government's "Make in India" campaign have on air pollution levels?

The government's "Make in India" policy could make the pollution crisis even worse. There are no ecological or social criteria about "making" in India. On the contrary, environmental and labor laws are being diluted to attract investors, without social and ecological conditions.

Without environmental safeguards, this policy will destroy the soil, uproot farmers, contribute to deforestation, and increased pollution. For example, the Delhi-Mumbai Industrial corridor would destroy 17 percent of India's farmland.

The Land Acquisition Ordinance which will allow the government to forcefully appropriate the land of small farmers without their consent, without a social or food security assessment is being challenged by farmers and opposition parties.

What more needs to be done by the Indian government and society to tackle the issue?

India is carrying a very heavy ecological and social burden of non-sustainable development. In a recent book I assessed that, for agriculture alone, the social and ecological externalities of industrial farming are $1.2 trillion, including the more than quarter million farmers who have committed suicide. India needs to return to its ecological civilization roots.

This was a point Prime Minister Modi made. But the ecological values need to shape policy. India needs to put ecology and democracy above market and commerce. The costs of destroying our resources and the livelihoods of our people are too high.

For ecological sustainability and social justice, India needs to evolve an economy with a lower ecological footprint and higher well being and shared prosperity. 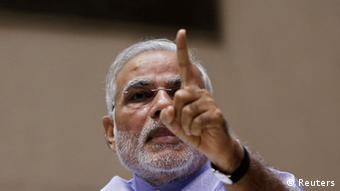 What do you make of PM Modi's statement that the changing lifestyles that have come with India's economic development are to blame for rising pollution levels?

Lifestyles grow from policy, and policies grow from paradigms. The dominant paradigm today is neo-liberal market fundamentalism, which suits the industry, but not the people. A small section participate as consumers, the rest gets excluded.

India did not have an automobile dominant mobility culture till the 1990s when globalization and neoliberal policies were introduced. After that, pavements for walking gave way to flyovers, cyclists and pedestrians were pushed out by cars. To provide a comparison: citizens of the Danish capital Copenhagen make a lifestyle choice by riding bicycles because the government has a policy to have high taxes on cars and high parking fees.

Dr. Vandana Shiva is an Indian human rights and environmental activist. Shiva is also one of the founders of the Navdanya Research Foundation for Science Technology & Ecology, an India-based non-governmental organization which promotes biodiversity conservation.