Indian farmers use tech solutions to keep away marauding monkeys

Instead of using traps or poison, some farmers in India are testing light and sound as kinder ways to keep away monkeys, elephants and other daring would-be diners from their crops, already hit by climate change. 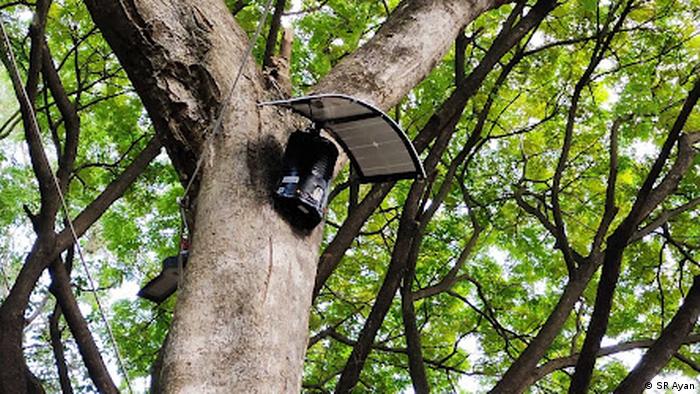 Raghavendra Bhat runs an organic farm surrounded by forest just outside the southern Indian city of Bengaluru, the country's tech capital. When Bhat exchanged his keyboard for a plow in 2014, he didn't realize he'd have to contend with some mischievous visitors wreaking havoc on his 15-acre (6-hectare) plot.

At first, he didn't mind the intruders. But then things took a turn for the worse.

"At some point of time, we started getting literally hundreds coming to the banana plantation, and then they started slowly coming to the house, jumping on people," said Bhat. "That is when we literally felt it's a menace now, and we need to do something."

The farmer was facing a monkey onslaught. As the attacks on his orchard surged, he even started to recognize some of the animals individually.

"One of them is without a tail, and he is the leader actually. Every year, he comes with a larger group," said Bhat. 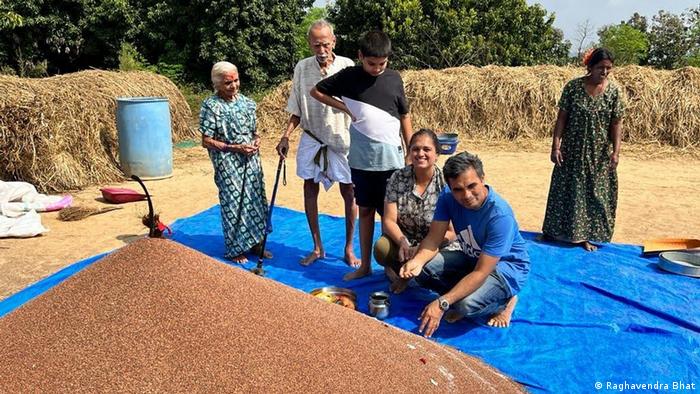 Raghavendra Bhat with his family and their harvest in India

Wildlife on the lookout for easy food

Farmers are used to pests. But with climate change and human encroachment on wildlife habitats leading to shrinking food supplies, animals are increasingly raiding farms in search of a snack.

Farmers in India are already seeing failed harvests at a time of erratic rainfall, so most cannot afford to lose more of their crops to wild animals.

Bhat, who has a sizeable farm, wonders how small farmers can handle the double whammy of wildlife attacks and climate change. Nearly 90% of his recent pigeon pea harvest rotted due to excess and unseasonal rains.

"Imagine the same thing happening to a small farmer who is just dependent on income from this, because many of them would have taken a loan and he will have to pay it despite the crop losses," said Bhat. "Now imagine monkeys or any other wild animals damaging the remaining 10%. He won't be able to even survive the next year."

To protect their livelihoods, some are using firecrackers, electric fences and even poison on the animals raiding their land. But others, like Bhat, are looking to technology to offer a kinder solution to outwit intelligent visitors like monkeys and elephants.

A manual monkey catch and release

Bhat loses at least 20% of his revenue to invasions of monkeys and elephants looking for a meal. The losses could have doubled if he hadn't taken the laborious step of baiting and caging monkeys when the attacks became too much about five years ago. He would lug up to 25 trapped monkeys on his tractor and free them in a forest around 100 kilometers (62 miles) away.

"I don't mind if they just eat and go," said Bhat. "Right from bananas to guava to mango to sapota, they will pluck 10, bite all of them and probably eat one, sometimes none of them."

In December 2021, a guest staying at Bhat's farm experienced the monkey menace. He recommended a bioacoustic device that was being tested in northern India to scare away monkeys. The motion-sensing, solar-powered equipment played the roar of lions, tigers, leopards or even gunshots to scare off animals.

Bhat got in touch with SR Ayan of Katidhan, the wildlife tech company that produces it. "How do you change the behavior of an animal without harming it?" asked Ayan. "It is by attacking its senses." 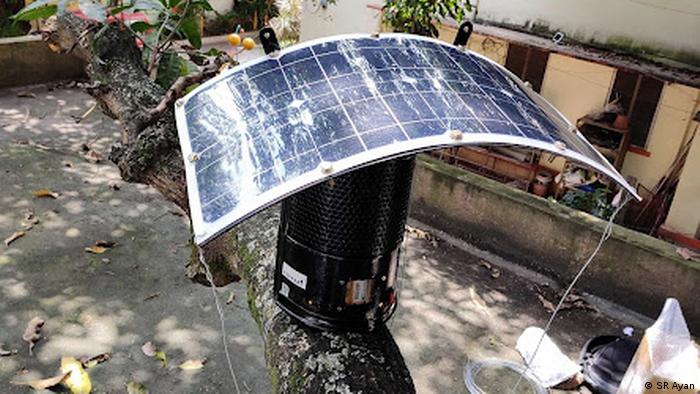 Before hitting on the sound device, Ayan's team tried out a motion-detecting sprinkler that would squirt water on the swinging marauders, but that didn't have the intended effect. "When we initially started out, the monkey felt a little agitated thinking that the water was coming toward him. But later on it started playing around with it, just within a day or two," said Ayan.

The team then turned to sound, programming the speaker to play a different noise each week so the monkeys wouldn't figure out they were being tricked.

An expensive outlay to keep out animals

At $130 (€118, 9,895 INR), the device is expensive. Bhat, a new farmer who got into the business voluntarily, could afford it. But that price puts the device out of reach for many. More than half of India's workforce is stuck in agriculture with few alternatives. The majority have landholdings smaller than 2 acres — about the size of a soccer pitch — and struggle to make ends meet.

Global heating has been a factor in 59,000 suicides in India since 1980, as failing harvests push farmers further into poverty, according to a University of California, Berkeley report. The 2017 study predicted that for each 1 degree Celsius (1.8 degrees Fahrenheit) increase in temperature, 67 additional suicides are likely every growing season. 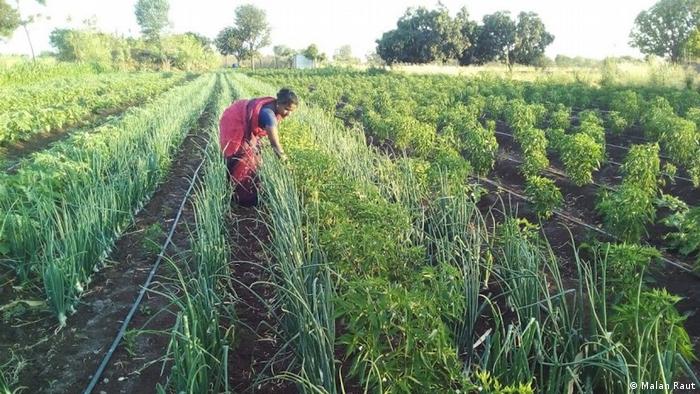 Malan Raut checking the crops on her small plot of land

Malan Raut is a 35-year-old farmer with two acres of land in a village in the west Indian state of Maharashtra. In 2020, Raut lost crops to floods. The following year, she planted fenugreek hoping for a profit. But this time, it was deer, not rising waters, that threatened her harvest.

Last August, Raut lost the equivalent of $1,000 to deer raids on her vegetable patch. "The deer plucked the greens and left just stalks," she said. So, she turned to another tech solution, also produced by Ayan's company Katidhan and donated by a women's farming cooperative.

A scarecrow stands in a 1-acre vegetable patch on her land. Instead of a mud pot for a head, there's a boxy device with a solar-powered flashing light that blinks all night, scaring away animals. This year, Raut's fenugreek greens survived.

Getting used to the light and sound

There are drawbacks to these devices though. Raut's neighbors use a sound device, similar to Bhat's but cheaper, to ward off animals. She says it ruins the peace and quiet. And while these systems can be troubling to human neighbors, some researchers say it's only a matter of time before the animals get used to the noise.

Shaurabh Anand studies human-wildlife conflict in India for the World Resources Institute, a US-based environmental group. He says while monkeys do seem startled at first, over time they shrug off the blaring sounds and brazenly continue raiding farms.

"What we have observed is that acoustic deterrents are not at all successful in deterring these monkeys," said Anand.

For now, Bhat has attached the monkey repeller to a 10-foot electric pole at the western end of his farm. It's far enough from his house that he's not bothered by the noise. But he has noticed the monkeys adapting to it.

"I saw the monkeys coming and this one making some noise and them running away," he said. "But these monkeys being smart, now they have stopped coming from that side and started entering from other directions."

Two men have been arrested for using monkeys to terrorize and rob people in New Delhi. The animal accomplices have been sent to a rescue center.