Two men have been arrested for using monkeys to terrorize and rob people in New Delhi. The animal accomplices have been sent to a rescue center. 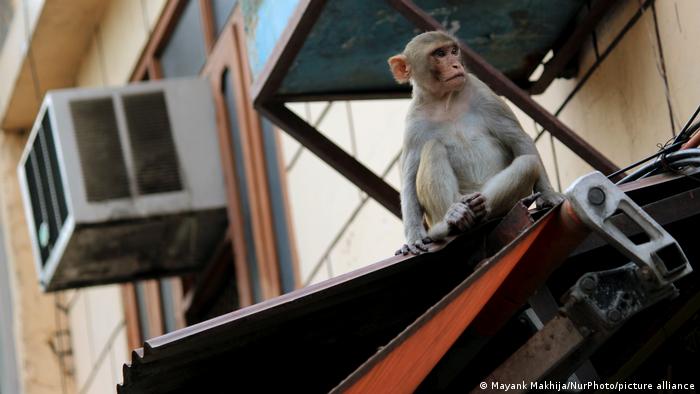 Monkeys in urban areas have entered homes looking for food

Two men have been arrested in India’s capital city of New Delhi for using monkeys to threaten and rob unsuspecting victims, police said on Saturday.

Last month, a victim reached out to authorities after three men with monkeys surrounded him as he was traveling in south Delhi. He was robbed of 6,000 rupees ($80, €67), according to local media outlets.

"When the victim was sitting in an autorickshaw, the men also entered (the vehicle) and asked one monkey to sit on the front seat and another at the back," a local police official told the AFP news agency. "They took the money the lawyer had in his wallet and fled with the monkeys."

As it was a "strange case involving monkeys, a dedicated team was constituted to catch the culprits." Two perpetrators were arrested with their animal accomplices at a bus stop on Thursday. The third thief, Ajay, has not been apprehended.

The monkeys have been sent to an animal rescue center.

"A case has been registered under Indian Penal Code Sections 392 for robbery at Malviya Nagar police station. Relevant provisions of the Wildlife Protection Act have been added against the accused in the case," said Delhi’s Deputy Commissioner of Police (South) Atul Kumar Thakur.

Several urban areas in India have been struggling to deal with the menace posed by monkeys, which often enter homes in search of food and attack unsuspecting victims. However, under a 1972 law, it is illegal to capture the animals.