Ahead of Monday's United Nations Climate Action Summit, young activists took to the streets and gathered at their own climate conference in New York City. Their message to world leaders: This is a climate emergency. 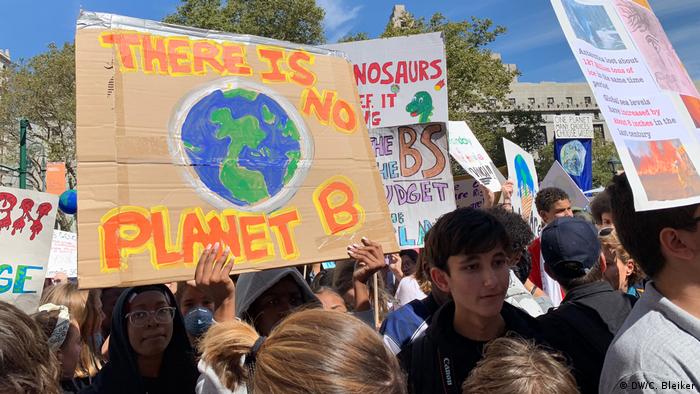 During his 2 1/2 years in office, US President Donald Trump has rolled back dozens of environmental regulations and pulled his country out of the 2015 Paris climate agreement that aims to restrict global warming to less than 2 degrees Celsius (3.6 Fahrenheit) above preindustrial levels. That track record certainly does not make the United States the most obvious host for a global climate summit. And yet that is what will occur on Monday, when the United Nations holds the Climate Action Summit 2019 at its headquarters in New York City.

The gathering is an attempt to kick-start the global campaign against climate change. In two sessions, roughly 60 world leaders will announce concrete steps they will take to tackle global warming. Among the speakers are French President Emmanuel Macron and Indian Prime Minister Narendra Modi. The UN is denying the spotlight to countries that are not making commitments bold enough to reach the goals set in the Paris climate accord.

"Don't come to the summit with beautiful speeches," UN Secretary-General Antonio Guterres said at a press conference in August. "Come with concrete plans."

With the event happening on his home turf, Trump will not be able to ignore it. In the days leading up to the heads of state gathering, climate activists had already drummed up noise with the hope that other politicians and business leaders would pay attention as well.

On Friday, an estimated 250,000 protesters took to the streets of New York City to call for more climate action and respect for the environment, making it the biggest US event of the global climate strike that day.

"This is a really good cause, because it will draw the attention of politicians and show other people that this movement will work," 10-year-old protester Alisa, who had traveled to the event in New York from Connecticut with her dad, told DW.

At the end of August, young climate activist Greta Thunberg made headlines by sailing from the UK to New York on a zero emissions yacht. She attended the climate strike in New York on Friday and spoke at the afternoon rally in Battery Park.

"The people in power, their beautiful words are the same, the empty promises are the same, the lies are the same and the inaction is the same. Nowhere have I found anyone in power who dares to tell it like it is, because no matter where you are, even that burden they leave to us, us teenagers, us children," Thunberg said in her speech. "What is the point of educating ourselves and learning the facts when the people in power refuse to listen to the educated and pay attention to the facts?" 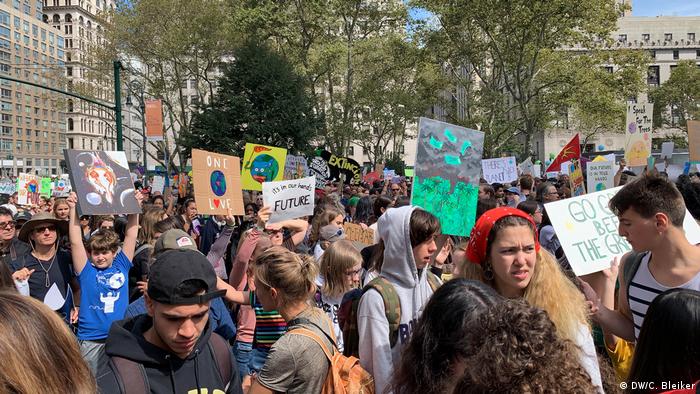 The 16-year-old founded the "Fridays for Future" movement that sees students across the world leave school each Friday to protest for more climate action.

In the US, the young activists are dealing with a president who has publicly doubted the science behind climate change many times. Unsurprisingly, many of the posters displayed at the climate strike in New York took shots at Trump and his policies. Among the more creative slogans: "Abolish ICE, not ice," referring to the Trump administration's immigration law enforcement agency, and "There is no golf to be played on a dead planet," a reference to one of Trump's favorite pastimes.

While Trump was not expected to attend the summit on Monday, a high-level US official and delegation is expected to attend. What they will say is anyone's guess, but experts are pointing out that with rising temperatures — and with the voices of youth protesters growing louder in the US as well — the time for denial and platitudes has passed.

"The powerful and inspiring leadership from US youth climate strike activists has blown open a window of opportunity," Charlie Jiang, a climate campaigner with Greenpeace, told DW. "This is a crisis and there is no middle ground anymore. We need bold actions."

That mood was reflected at the Youth Climate Summit at the UN on Saturday, where more than 1,000 young people from more than 140 countries came together to discuss strategies to protect the environment and to get politicians to take climate change seriously. 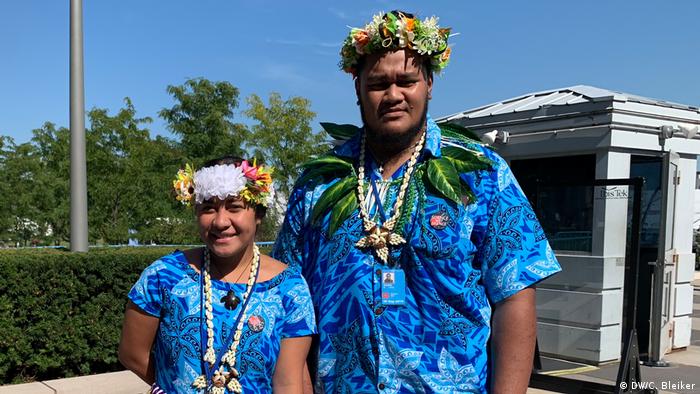 "Climate change is frightening, especially if you see it with your own eyes," said 20-year-old Nanoua Ewekia. She had come to the summit from Tuvalu, a Pacific island nation that is at risk of being swallowed by the ocean due to rising sea levels. "We need to make noise so people like [Trump] will hear us. How would they feel if they were in our shoes?"

People in countries like Tuvalu will pay particularly close attention to the UN Climate Action Summit. If the commitments announced on Monday don't go far enough to keep global warming to under 2 degrees Celsius, they could lose their home forever.

Speaking to the US Congress, the teenage climate activist has urged lawmakers to take action on the "existential crisis" of climate change. Thunberg criticized the US for being the "biggest carbon polluter" in history. (19.09.2019)

The activist made the 14-day carbon-free journey on a yacht featuring solar panels and electricity-producing turbines. She has called for action to reverse climate change and had a message for President Trump. (28.08.2019)