The climate summit came just a day after millions of people took to the streets across the world as part of the Global Climate Strike. Thunberg hit out at older generations for doing little to curb carbon emissions. 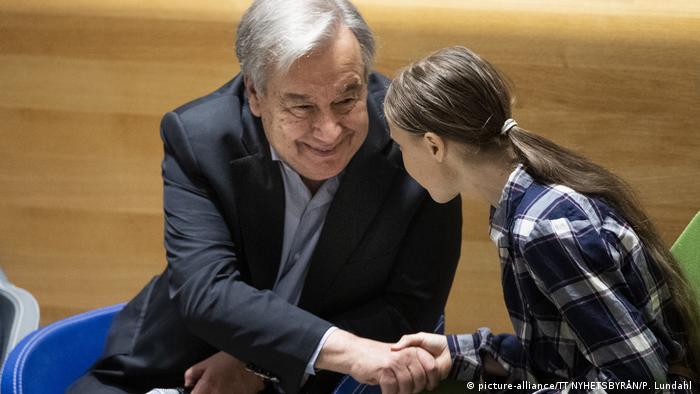 Greta Thunberg, a teenage climate activist from Sweden, on Saturday opened the Youth Climate Summit at the United Nations headquarters in New York.

On Friday, millions of people across the world participated in the Global Climate Strike, a weeklong protest initiated by Fridays for Future. Organizers are calling for an end to fossil fuels and want governments to implement the Paris Climate Agreement.

"Yesterday millions of people across the globe marched and demanded real climate action, especially young people. We showed that we are united and we young people are unstoppable," Thunberg said at the first of its kind Youth Climate Summit.

More than 700 young activists took part in the youth climate conference, according to Luis Alfonso de Alba, the UN special climate summit envoy. The 16-year-old Thunberg had launched the climate strike movement with her lone protest in front of the Swedish parliament about a year and a half ago.

'A change in momentum'

UN Secretary-General Antonio Guterres also attended the youth summit and urged his generation to heed the voices of the youth.

Guterres said he sees "a change in momentum" going into Monday's Climate Action Summit, which takes place ahead of the UN General Assembly gathering of world leaders on Tuesday.

"You have started this movement," the UN secretary-general said.

"I encourage you to keep your initiative, keep your mobilization, and more and more to hold my generation accountable," Guterres said, adding that his "generation has largely failed until now to preserve both justice in the world and to preserve the planet."

President Donald Trump, who in 2017 pulled the US out of the Paris Agreement to limit the world's greenhouse gas emissions and slow global warming, is not expected to attend Monday's climate meeting.

Germany's government has agreed climate policies including carbon dioxide pricing via emission certificates, costlier fuels, cheaper rail, and a ban on oil heaters from 2026. A leading Green was "bitterly disappointed." (20.09.2019)