The 16-year-old, and the movement she inspired, have won the 2019 Ambassador of Conscience Award. Germany, meanwhile, confirmed aggressive action on climate change as its citizens prepare for mass protests on Friday. 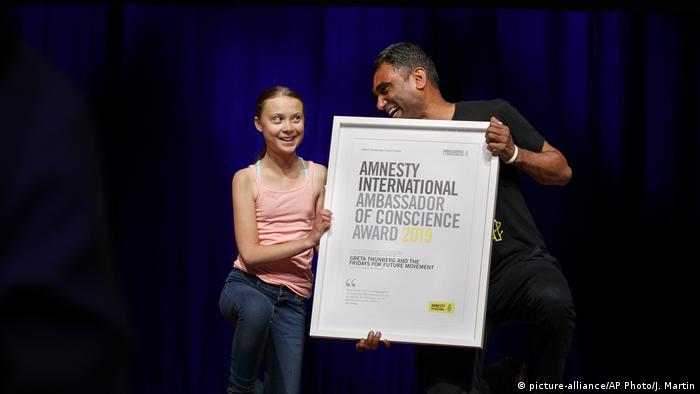 Swedish climate activist Greta Thunberg has been honored by Amnesty International USA, who have presented her with the 2019 Ambassador of Conscience Award on Monday.

Since arriving in the US by carbon-neutral boat last month, she has joined climate protests and had a string of media appearances as part of her Fridays For Future movement.

The 16-year-old accepted the award on behalf of "all the fearless youth fighting for their future, a future they should be able to take for granted but as it looks now, they cannot."

Amnesty said it was for both Greta and the movement she created as she had shown "unique leadership and courage in standing up for human rights."

The NGO's Secretary General Kumi Naidoo, who himself was a young activist during the Apartheid regime in South Africa, gave the top human rights prize to Thunberg and other activists in Washington DC.

Naidoo told DW that politicians could learn a lot from the youth of today and that he hoped the award would inspire others to join the fight.

"I'm hoping that by giving the Amnesty Ambassador of Conscience Award to Fridays for Future and Greta we're making a small contribution to lifting up the struggle and giving it the prominence that it deserves… Children are behaving like adults, when many adult political and business leaders are behaving like children."

Naidoo enthused over this coming Friday's events saying: "Let's make this the biggest climate protest ever."

Thunberg has been protesting for more than a year for more climate protection. Her weekly school strike has attracted millions of supporters across the globe.

Germany on the move

This Friday's event will attract thousands more rallies around the world, with Germany leading the way in Europe, which has over 400 rallies registered in aid of the climate strike.

"This is an important signal," said Antje von Broock, a representative for some 200 environmental, youth and church groups in Germany.

Meanwhile, German Chancellor Angela Merkel plans to announce measures that would put the country on course to cut its emissions 55% by 2030 compared with 1990 levels.

Merkel's Christian Democratic Union said Monday that it prefers a national emissions trading scheme as a way of reducing CO2 and other greenhouse gases, while providing financial incentives for those willing to switch to low-carbon vehicles and heating systems.

The Social Democrats, who prop-up Merkel's government as part of a coalition, have proposed an alternative in the form of a tax on carbon that would then be redistributed in an effort to avoid hitting the country's poorest citizens.

Frank Bsirske, the head of Germany's service trade union ver.di, said the outlook looks bleak and needs to be addressed, even in a best-case scenario.

"Even if the extent of global warming is on a smaller scale, it's still dramatic enough to warrant protecting the climate," said Bsirske, whose organization is pushing for its members to join the demonstrations.

As further evidence for Germany upping the ante for this month's protests, Germany's biggest intercity bus company, Flixbus, is offering free travel for those planning to attend rallies on either Friday September 20 or the following week on September 27.

The IAA motor show in Frankfurt was disrupted by crowds of climate protesters. They demanded an overhaul of transport policy with environmental concerns at the forefront. (14.09.2019)