Swedish climate change activist Greta Thunberg has taken part in her first demonstration on US soil after arriving by zero-carbon yacht. She joined hundreds of other teenagers protesting outside the United Nations. 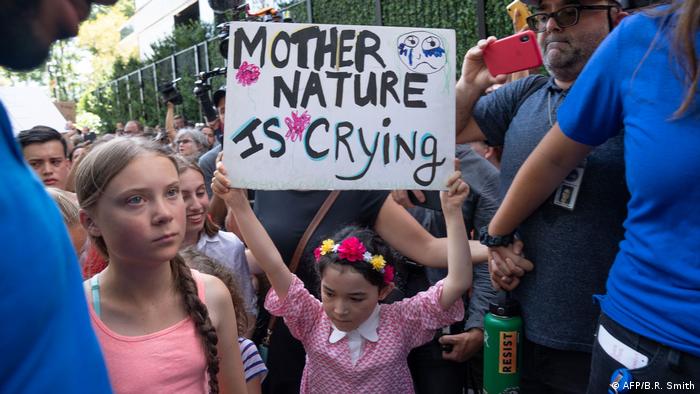 Greta Thunberg joined hundreds of other teenagers on Friday to protest outside the United Nations headquarters against inadequate global action to curb greenhouse gas emissions.

The 16-year-old Swedish activist has inspired a global youth climate movement by organizing weekly school strikes in her home country to draw attention to what she calls "a war on nature." She has spurred teenagers and students around the world to gather every Friday under the rallying cry "Fridays for future," to call on adults to act now to save the planet.

"Stop denying the earth is dying," and "We vote next," chanted the several hundred demonstrators, who included a few children as young as six, outside the UN headquarters. Some youngsters were attending a climate protest for the first time. "I knew there would be celebrities like Greta here. I think it's a really good idea. You have to change something," 13-year-old New Yorker Gabriel Kunin told the AFP news agency.

Thunberg attended the protest briefly before heading into the UN, where she had an impromptu meeting with the president of the General Assembly, Maria Fernanda Espinosa of Ecuador.

Thousands of young protesters worldwide have followed Thunberg's example and skipped school on Fridays to publicly voice their concern about global warming and put pressure on politicians to act on the recommendations of the UN-backed Intergovernmental Panel on Climate Change (IPCC).

Despite a warning from the IPCC in October that greenhouse gas emissions will have to be drastically reduced over the next 12 years to stop the Earth warming to dangerous levels, carbon emissions hit a new high last year.

Read more: Fridays For Future in the US: A small but determined movement

Scientists have shown that human output of such gases from burning fossil fuels since the beginning of the Industrial Revolution has already intensified extreme weather phenomena like heat waves and droughts.

Thunberg, who will attend a UN summit on zero emissions on September 23, refused to fly because of the carbon emissions caused by planes. To reach the United States, she embarked on a 15-day journey across the Atlantic on an emissions-free boat.

The boat's onboard electronics are powered by solar panels and underwater turbines. The teenage activist has said she does not yet know how she will return to Europe.

The activist made the 14-day carbon-free journey on a yacht featuring solar panels and electricity-producing turbines. She has called for action to reverse climate change and had a message for President Trump. (28.08.2019)

German Chancellor Angela Merkel is in Iceland for talks with leaders of Nordic countries. Climate policy is expected to dominate the agenda, and Merkel has called for 'humility' in our treatment of the environment. (20.08.2019)