The activist made the 14-day carbon-free journey on a yacht featuring solar panels and electricity-producing turbines. She has called for action to reverse climate change and had a message for President Trump. 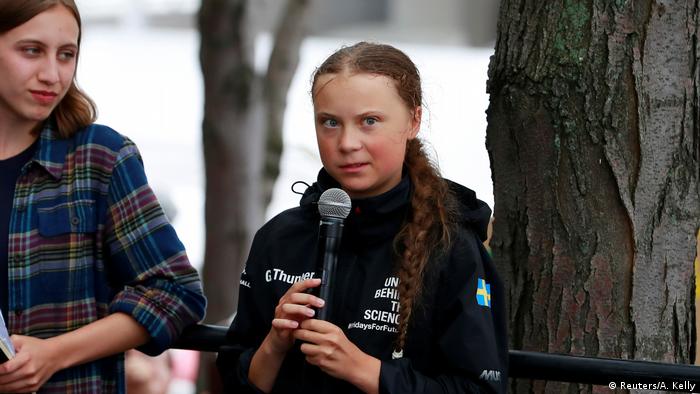 Sixteen-year-old Swedish climate activist Greta Thunberg arrived in New York City on Wednesday after traversing the Atlantic Ocean on a zero-carbon emissions vessel. The teen refused to fly there to make a statement about the carbon emissions caused by airplanes.

Instead, she opted to make the transatlantic journey carbon-free by sailing on the Malizia II, a 60-foot (18-meter) yacht featuring solar panels and electricity-producing underwater turbines.

Thunberg sailed to New York to attend the UN Climate Action Summit on September 23, where she is scheduled to give an address. It is the first time she has brought her environmental message to the United States.

Read more: Fridays For Future in the US: A small but determined movement

As she set foot in Manhattan, Thunberg was greeted by a crowd of a few hundred supporters chanting her name.

Of her 14-day journey, in rudimentary conditions where she only had a bucket for a toilet, she said it was "surprisingly good."

"I did not feel seasick once," the teen said, adding that she did look forward to warm meals and to relax for a couple of days.

"It is insane that a 16-year-old had to cross the Atlantic Ocean to make a stand," Thunberg said.

When asked about whether she could be the one to persuade US President Donald Trump to act on climate change, the teen expressed little hope. "My message for him is listen to the science and he obviously doesn't do that," Thunberg said.

Following her US visit, Thunberg will head to Canada and Mexico. She will then set off for Chile to attend the UN Conference of the Parties (COP 25) climate summit, using a combination of trains, buses and possibly more sailing.

Thunberg has urged European countries, including her native Sweden, to do more in combating climate change. In April, she urged the European Parliament to take bold action to address the global crisis.

"Our house is falling apart and our leaders need to start acting accordingly because at the moment they are not," she said. "If our house was falling apart, you wouldn't hold three emergency Brexit summits and no emergency summit regarding the breakdown of the climate and the environment."

Earlier this year, Germany and several other European countries logged the highest temperatures they had ever recorded. Scientists have pointed to abnormal temperature increases as further evidence of the man-made destabilization of Earth's climate system.

Global efforts to reverse climate change have dragged, with major CO2 emitters such as the US failing to take part in international accords to reverse the potentially catastrophic trend.