No toilet, no shower, no kitchen; Swedish climate activist Greta Thunberg has begun her trans-Atlantic yacht trip from Plymouth. She will spend two noisy weeks on the waves instead of flying for eight hours. 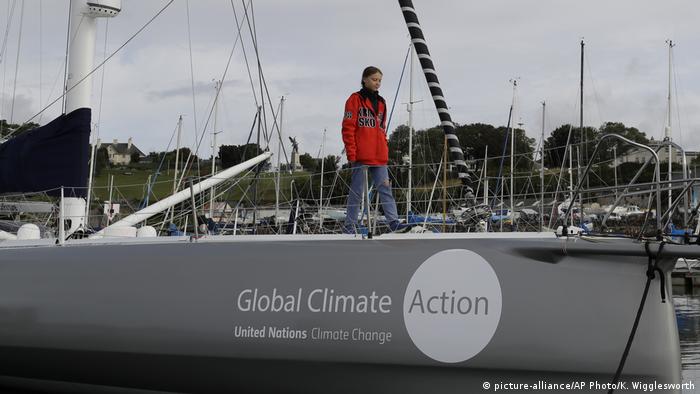 Greta Thunberg began her journey on Wednesday aboard the "Malizia II," a no-comfort, high-tech ocean racer skippered by a champion yachtsman and a member of Monaco's royal family.

Sixteen-year-old Thunberg — who has long refused to fly due to carbon emissions — set sail on the zero-emissions yacht to New York for a UN climate summit.

The Fridays for Future star's voyage is skippered by round-the-world sailor Boris Herrmann from Hamburg and Pierre Casiraghi, the grandson of Monaco's late Princess Grace Kelly.

Critics will find fault with its 18-meter-long, carbon-fiber hull — derived from oil — but otherwise the yacht relies on its sails and autopilot, hydrofoils for underwater dynamics, a solar panel and water-driven turbines for electricity.

A mandatory diesel motor is sealed away for emergencies.

Thunberg announced mid-June that she had no intention of flying to avoid the "enormous climate" costs of aviation, and soon after she received dozens of trans-Atlantic sailing offers, deciding on "Malizia."

At 15 knots, every wave resounds deafeningly through the hull and can toss crew off balance. On deck safety lines are essential, reported the German Jacht magazine. In the pantry is merely a gas cooker.

"Perhaps we'll sail northerly around one of the other lows (air pressure zones)," said Herrmann.

"I can imagine that because of her impressive understanding of climate issues she'll bring a strong curiosity for the weather and navigation," he added.

Also due on board were Thunberg's father and actor Svente, and Norwegian filmmaker Nathan Grossman.

At a Plymouth dockside briefing last Sunday, Herrmann said Thunberg had assured him she was upbeat despite being a maritime novice, the risk of seasickness and spartan equipment. To his question whether she was scared, she answered with a "clear no," said Herrmann, whose yacht at top speed does 25 knots (46 kilometers per hour).

While visiting worried low-lying Pacific island nations in May, UN chief Guterres decried "fading" efforts to keep global warming at 1.5 degrees Celsius as agreed in the UN's 2015 Paris Agreement — and aimed a net-zero emissions by 2050.

Already, the planet's surface has warmed by 1 degree on average since the dawn of the Industrial Revolution in the late 18th century.

Upwards of 2,500 flights take place daily across the Atlantic, with each one-way trip estimated to emit about one ton of carbon dioxide per passenger.

In some 50 countries — from Burundi in Africa to Paraguay in South America —  the average resident emits less carbon dioxide in a whole year.

Compared to mainstream trans-Atlantic crossings that brought migrants to the Americas in the 19th century, passenger shipping was overtaken in the 1950s by jet airliners.

The few current maritime passenger alternatives across the Atlantic are the luxurious Queen Mary II and several hundred container and cargo ships worldwide that also carry handfuls of paying passengers.