Swedish climate activist Greta Thunberg is sailing from Europe to New York to travel carbon-free. But few ordinary people will be able to follow her example, writes DW's Felix Steiner. 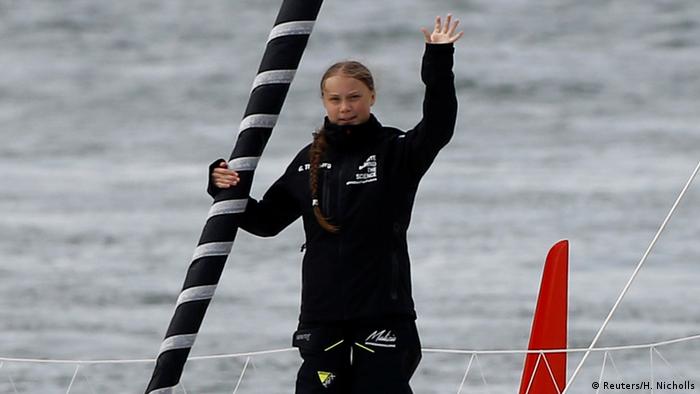 If Greta Thunberg really were some sort of messiah, she would also be able to walk on water and simply hike across the Atlantic by foot and reach New York carbon-free. Though she would have had to leave a bit sooner to arrive on time for the Climate Action Summit in New York on September 23 — even if she walked around the clock, she would still need 60 days to get to the Big Apple.

But as she is no messiah, Thunberg has instead boarded a zero-carbon yacht to cross the Atlantic. It is, once again, a daring move. I still clearly recall my first sailing cruise in the Aegean Sea. On the third day, as the sea got choppier, I got very seasick. And, fortunately, we returned to port that night. Greta and her team, on the other hand, will be sailing non-stop for about 15 days and nights across the Atlantic and doing it on a vessel that has neither a comfy bed nor a toilet. It will be hard for Greta. But she has insisted on traveling carbon-free; that was her condition for the trip.

This is what has come to define Greta. Her absolute, radical and uncompromising stance. A year ago, barely anyone knew the 16-year-old activist. Today, she has millions of supporters thanks to her determination. And she played a considerable role in helping put climate change on the political agenda in Germany, as well as making it a big issue in the run-up to the European parliamentary elections — so much so that it overshadowed Brexit and the Italian debt situation.

She has been called a prophet for focusing on climate change, and for subordinating everything else to this issue. The Church could count itself lucky if it had someone like Greta, who has so much prophetic talent and missionary zeal. Indeed, the faith of the Fridays for Future moment will have made the pope (whom Greta has, of course, already met) and many bishops somewhat jealous.

Yet it will be interesting to see what will happen next with Greta Thunberg and her many predominantly young followers. Yes, there have been impressively large weekly climate rallies. But many of her fans did not seem particularly environmentally conscious when they embarked on their holidays and travels this summer. School strikes and colorful placards alone will not undo global warming.

With this in mind, it's easy to question whether Greta has gone a bit overboard in her decision to cross the Atlantic on a high-speed yacht. After all, if she makes the journey on time that will be a great feat. But it is questionable whether ordinary people will be inspired by her example given the harsh conditions of sailing aboard such a yacht. We will see whether Greta's PR machine — there is a documentary filmmaker on board — will be able to make up for this disparity.

Because Greta has so often been compared to a prophet and because her message has been likened to a religion, a quick comparison is in order: a (new) religion will only be successful if its message is credible. Religions have always been most successful when they cooperated and joined forces with secular powers. With regard to democracy, this would mean making compromises and to accept that others also have legitimate needs and goals.

A pure cause vs. compromise

German Chancellor Angela Merkel has always insisted on thinking in terms of outcomes. And former Chancellor Helmut Kohl once said that all that matters are results. Essentially, this means insisting that your cause stays pure does not make sense if it also means you don't make an impact. But reaching compromises that have far-reaching effects can change the world. In any case, it is worth thinking about this. Greta Thunberg has 15 days aboard the Malizia II to mull this over.